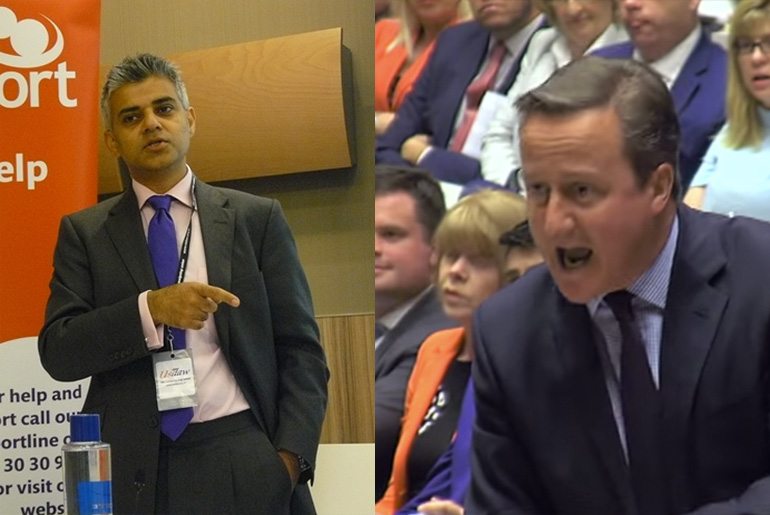 David Cameron resorted to Islamophobic smears at Prime Minister’s Questions (PMQs) on Wednesday in a disastrous attempt to undermine the campaign of Labour candidate for Mayor of London, Sadiq Khan.

If we are going to condemn not just violent extremism but also extremism that seeks to justify violence in any way, it is very important we do not back these people and we do not appear on platforms with them. And I have to say I am concerned about Labour’s candidate as Mayor of London who has appeared again and again and again…

After being interrupted by shouts of “racist!” from the Labour benches, Cameron continued:

The leader of the Labour party is saying it’s disgraceful. Let me tell him… Suliman Gani, the honourable member for Tooting, has appeared on a platform with him nine times. This man supports IS [Islamic State/Daesh].

It is the same attempt to smear Khan by association that Conservative candidate Zac Goldsmith has repeatedly tried to use during his campaign to become Mayor of London. Just last week, Goldsmith told The Evening Standard:

To share a platform nine times with Suliman Gani, one of the most repellent figures in this country, you don’t do it by accident.

Goldsmith’s attack backfired when Gani tweeted images of himself with none other than… Zac Goldsmith:

Oh no, I just read that Zac apparently calls me 'one of the most repellent figures in this country'
Dirty politics pic.twitter.com/WWYfIcdU5h

Gani went on to explain the photo was taken at an event he had been invited to. He also tweeted photos of himself with other Conservative MPs, including Tania Mathis, who he says asked for his help:

Here he is apparently sharing a platform with Conservative MP for Battersea, Jane Ellison, when they both supported the campaign to release Guantánamo prisoner Shaker Aamer:

And here he is with Dan Watkins, the Conservative candidate for Tooting who stood against Khan in the 2015 general election:

I supported @Dan in 2015 general elections, If repellant why @Conservatives wanted my support then @zacgoldsmith pic.twitter.com/uOxdQMXnP7

Cameron would have been well aware that his own MPs have repeatedly been snapped rubbing shoulders with Suliman Gani before he launched his PMQs attack. So why did he do it?

It was a gamble that more mud would stick to Khan than to his own white, non-Muslim MPs who have also associated with Gani. Because what Cameron was really doing in his PMQs attack was pointing out that Khan is a Muslim and a person of colour, and Zac Goldsmith is not.

Hey @ZacGoldsmith. There’s no need to keep pointing at me & shouting ‘he’s a Muslim’. I put it on my own leaflets. pic.twitter.com/EGeRXlPWAa

The tactic has been used so often by Zac Goldsmith, the Conservative party’s friends in the mainstream media, and now the Prime Minister himself, that it appears to be the central strategy – in fact, the only strategy – in Goldsmith’s election campaign, which is being advised by the controversial Lynton Crosby.

Zac Goldsmith, for example, has accused Khan of giving “cover to extremists” by campaigning against the extradition of Babar Ahmad, a Londoner who ended up in Guantánamo Bay. Embarrassingly for Goldsmith, Political Scrapbook uncovered footage of him also speaking out against Ahmad’s extradition.

Meanwhile, The Sun ran a story claiming that Sadiq Khan had questions to answer over his links to Makbool Javaid, his ex-brother-in-law, only for it to be revealed that Javaid’s law firm counted The Sun itself among its clients. The paper, incidentally, did not run a parallel story about the fact that Zac Goldsmith has both endorsed and been endorsed by his own ex-brother-in-law, Pakistani politician Imran Khan, who has said that those fighting against “foreign occupation” in Afghanistan were doing so as a religiously justified “jihad”.

This strategy is clearly backfiring on the Conservatives. And the furious reaction in the House of Commons has been echoed across social media:

Cameron misusing #PMQs to attempt to smear @SadiqKhan, yet Zac Goldsmith was photographed with Gani at a Tory event! https://t.co/mVEhE6GxiJ

Shame on our Prime Minister for choosing to use #PMQs to join in with Zac Goldsmith's & Lynton Crosby's smear campaign against Sadiq Khan.

Even by his own lamentable standards this is low from Cameron. If in doubt smear and smear again. #PMQs

Oh Dave. You're an absolute disgrace. Desperately trying to smear Sadiq Khan. I hope he wins by a country mile. #PMQs

And if the polls are anything to go by, the strategy is backfiring in a big way with Londoners too.

Write to the PM to ask him to stop his childish attacks based on ‘guilt by association’.