Tory MP calling for British troops to risk death for Saudi Arabia, is on the Kingdom's payroll - Canary 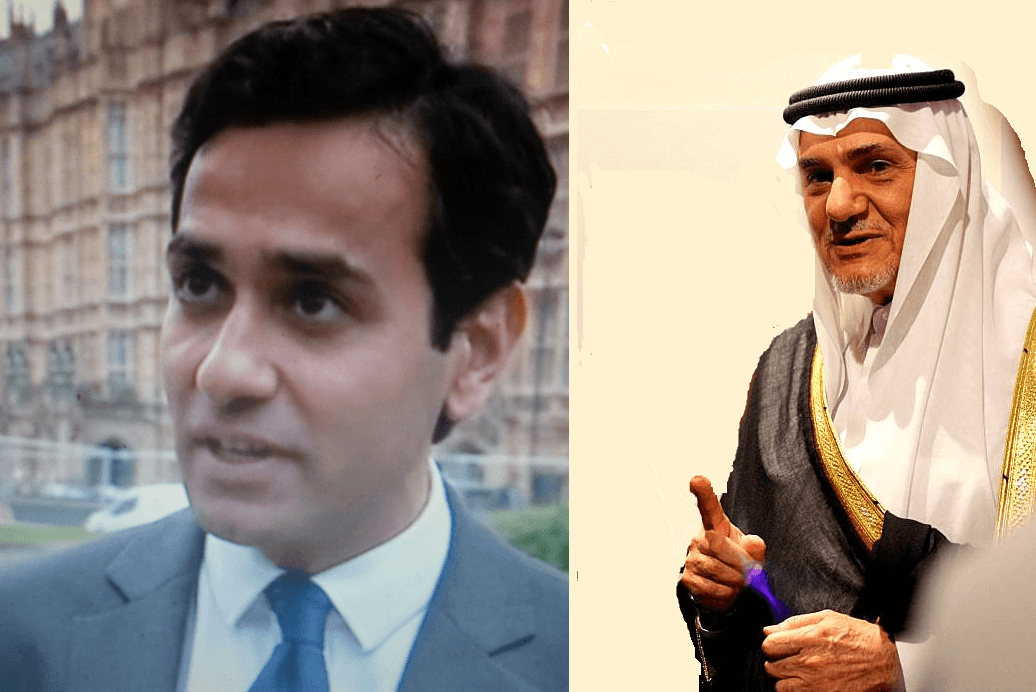 Conservative MP Rehman Chishti is calling for British troops to provide air cover to Saudi ground forces should they enter Syria. Meanwhile, according to parliamentary records, the MP for Gillingham and Rainham is being paid £2,000 a month as an adviser for the Riyadh-based King Faisal Centre for Research and Islamic Studies.

As Middle East Monitor reports, the institution’s Chairman is the ex-chief of Saudi Arabia’s intelligence services, Prince Turki Bin Al-Faisal. He served as intelligence chief from 1977-2001 and was known to bankroll jihadist groups in Afghanistan.

Chishti claims to advise on “international relations covering Europe and the Middle East”, despite the organisation’s website stating that none of its six research units involve Europe. The only nations listed are Saudi Arabia, Maghreb (north-west Africa) and Iran. So it’s hard to see exactly where Chishti’s advice comes in.

As well as cheerleading for favourable British military policy for the Saudis, the MP also peddles Saudi state propaganda in the House of Commons. The Shia cleric – Shaikh Ali Al-Nimr – was executed in January for peacefully demonstrating against the Saudi government. Yet Chishti channeled Saudi propaganda that the man was a terrorist with direct links to Lebanon’s Hezbollah. His only evidence was an article written by a convicted criminal with close ties to the Saudi government – Joseph Braude. And this article’s only evidence was ‘Saudi sources’.

The MP is currently the Vice-Chair of the All Party Parliamentary Group on Saudi Arabia. Fellow Conservative MP Daniel Kawzynski is the Chair. In 2011, they both enjoyed a £3,000 a piece trip to the Kingdom, bankrolled by the Saudi government itself. They joined other MPs in meeting powerful Saudis such as Prince Turki and members of the Shura Council.

In February, the former Saudi spy chief was invited by Chishti himself to discuss Daesh (ISIS). Now on Turki’s payroll, the MP said at the time:

It was a pleasure to meet with Prince Turki, whom I admire and respect. His great knowledge and wisdom on tackling many of the key challenges and issues we face in the world today should be taken into account when forming international policy.

At the wish of Prince Turki, it was Chishti who was behind the government policy title change from ‘Islamic State’ to ‘Daesh’. While this is a welcome change because it distinguishes the Saudi Wahhabism of Daesh from other schools of Islam, it still shows the influence the Saudis have in parliament through Chishti.

Back in January 2012, Chishti asked former Foreign Secretary William Hague to “strengthen our strategic relationship” with the totalitarian Saudi regime. Remember this is the same state whose official ideology – Wahhabism – is the driving force behind the Daesh insurgency in Syria and Iraq.

And it appears the MP has long been fighting the Saudi corner in parliament. In 2012, Chishti submitted written evidence to the Foreign Affairs Select Committee, which argued:

The Kingdom has also taken action to set up relevant institutions to guarantee the protection of human rights in the country. This includes the Human Rights Commission and the National Society for Human Rights.

Setting up groups with pretty labels is not ‘written evidence’ that ‘guarantees’ human rights will be protected. The tyrannical Saudi regime, the House of al-Saud, executed 47 people in one day last month, and is devastating neighbouring Yemen with indiscriminate airstrikes on an almost daily basis. The Saudi campaign has left 80% of Yemen’s population needing aid, as of March 2016.

Human rights organisation ‘Reprieve’ wrote about the 17-year-old Ali Mohammed al-Nimr who was sentenced to death by crucifixion:

He was accused of participation in an illegal demonstration and a large number of other offences. These include “explaining how to give first aid to protestors” and using his blackberry to invite others to join him at the protest.

Ali was tortured and forced to sign a false confession. This was the only evidence brought against him. He was then sentenced to ‘death by crucifixion’.

This is how minors are treated under the House of al-Saud.

Yet all the way back in 2012, Chishti was merrily arguing that the Saudis had changed their tune on human rights. And now he is on the payroll of the former Saudi chief of intelligence, while remaining an MP for Gillingham.

Is Chishti legally in the clear? As Alastair Sloan at Middle East Monitor asks:

Chishti has declared his financial relationship with the Saudi royal family through the proper channels, but could he still fall foul of other rules?

The Code of Conduct for Members of Parliament clarifies:

Taking payment in return for advocating a particular matter in the House is strictly forbidden. Members may not speak in the House, vote, or initiate parliamentary proceedings for payment in cash or kind.

Considering the abundant evidence that Chishti has been acting in favour of Saudi interests in parliament, the MP should be much more careful in the future.

– Write to David Cameron to ask why there is so much British support for Saudi war crimes in Yemen and human rights violations at home.

UPDATE: This article originally stated Chishti submitted written evidence in 2004, but it was 2012.