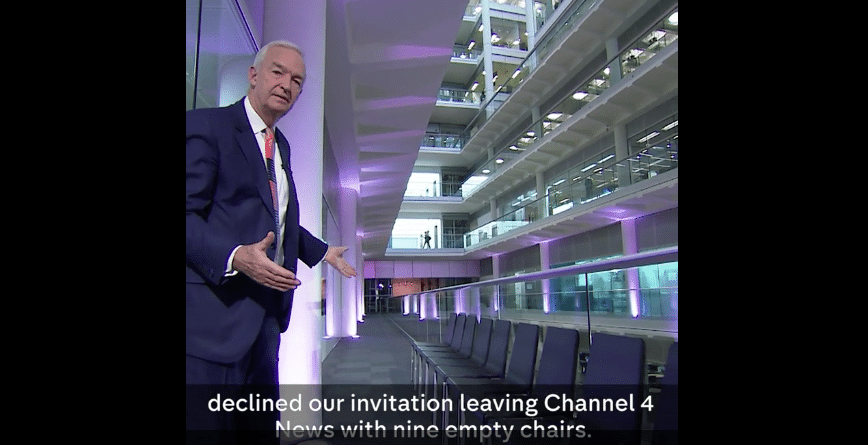 Channel 4 News host Jon Snow was left to interview nine empty chairs on the flagship news programme this week, when not a single MP accused in the 2015 election expenses scandal accepted an invitation to defend themselves.

The Conservative party may have won the 2015 election illegally, and they’re refusing to talk about it.

The Canary’s Bex Sumner wrote on the issue earlier this year, reporting that:

We quite simply could not have done it without you.

If they had, 20 of them would likely have exceeded the strict spending cap that limits how much candidates can spend on election campaigns. The aim of that spending limit is to protect democracy by ensuring a level playing field between political parties. Breaching it or “making a false declaration as to election expenses” are both criminal offences.

The Channel 4 News team, with specific credit to investigator Michael Crick, have been working to expose the election expenses scandal for months.

But the further Crick and his colleagues keep digging, the murkier the picture gets. Snow laid out the bones of the scandal on Twitter, making a number of stinging points which bear our consideration.

By the end of tonight's @channel4news we shall have revealed undeclared exepenses in 26 seats at the 2015 election: Tory Majority in 2015 18

If we, with our limited resources, have revealed undeclared exenses in 26 Tory seats: How many more seats suffered the same abuse?

This week, 9 Conservative MPs alleged to have participated in or benefitted from the scandal were invited into the Channel 4 studios to make their case. All nine refused.

This meant Jon Snow was left to interview nine empty chairs, which perhaps spoke more on the topic at hand than had the MPs shown up.

It's been 3 months but our invitation to @Conservatives to talk about #electionexpenses still unanswered #emptychair pic.twitter.com/Nzc5dczfgA