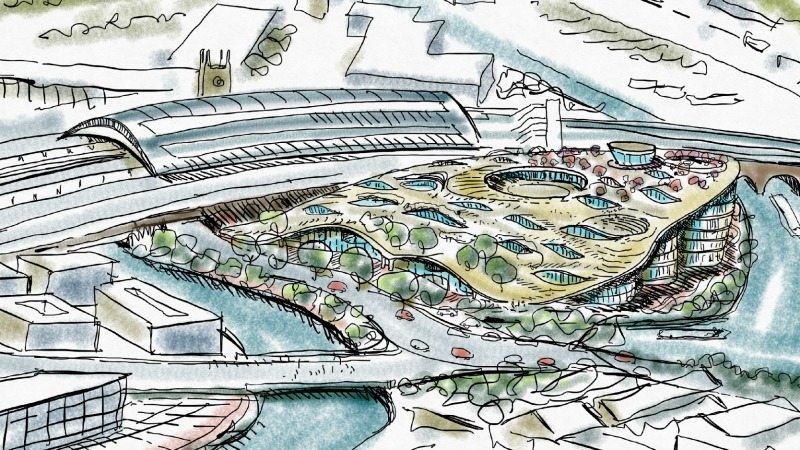 The Palace of Westminster, the iconic building that includes Big Ben and the Houses of Parliament, needs refurbishing. Where MPs will debate while the hazardous palace is fixed is currently undecided, but the most radical suggestion comes from London architects Studio Egret West. They want to see a departure from the “adversarial” chamber setup, transforming the House of Commons into an amphitheatre with a grass roof.

The firm has put in an option for Bristol’s Temple Quarter Enterprise Zone – the biggest regeneration project in the country – that would see a derelict former Royal Mail sorting office behind the city’s main Temple Meads station converted, allowing visitors and residents to:

Studio Egret West claims that the revised setup would shift relations not only between the general public and their elected government but also between opposing parties. “Inspired by the idea of a clearing in the woods”, the firm believes the forum would encourage:

Bristol’s mayor George Ferguson, himself an architect, has praised their “lateral thinking” and in addition highlights the plans for rail electrification between Bristol and London, shortening a commute to 80 minutes. The mayor joins advocates in hopes that a temporary-or-not parliamentary flight from London will increase the potential for regional regeneration and a break from entrenched, archaic government values. The Guardian’s editorial on the subject in 2015, declared:

Parliament must become a workplace, instead of a Victorian club. Few modern offices do or should have bars, let alone subsidised ones. A rethink of the institutions, organisation and culture is well overdue, and it must be reflected in the renovations chosen.

This could be the moment when electronic voting is introduced and some of the ceremonial clutter and parliamentary archaisms stripped away. Twenty-first-century MPs deserve a better and a more modern parliament. But so, in much more far-reaching ways, does the nation.

Comedian David Mitchell penned his own piece for The Guardian, instead claiming that working in their “massive neogothic palace” is the only perk MPs have left. Were they to stay in the building, the estimated timeline for completion is 32 years at a cost of £5.7bn. The shortest and cheapest is the “full decant” option in which all MPs and Lords move out for the entire duration – estimated to be 6 years and £3.9bn.

A 2012 report (pdf) into the structural integrity of the Palace of Westminster, concluded:

if it were not a listed building of the highest heritage value, its owners would be advised to demolish and rebuild.

The Palace, which hasn’t seen restoration since work to repair fire damage in 1834, has suffered damage from bombing in WWII, years of water and pollution damage and a general lack of maintenance. The picture painted in the report of MPs’ working conditions isn’t pretty:

The roofs are leaking, gutters and internal plumbing regularly fail, and there has been extensive damage to the Pugin-designed interiors, the report says. There is asbestos throughout the building…

And so, alongside the decision of which of several restoration scenarios to choose – all of which involve a considerable amount of money and time – is the decision of where MPs will conduct Parliamentary business for, at the very least, six years. Many are calling for a full grasp of the opportunity to make a radical departure from London, and also for something more far-reaching. No matter which scenario is chosen, the costs to the public purse will be in the billions – and these estimates are subject to change, considering they’ve already risen since the initial 2012 report.

It’s likely that MPs will be rehoused in an alternate government building, however, Egret West’s suggestion is not the only one to favour a departure from the capital. MPs from the West Midlands are calling for Birmingham’s new city library, voted Britain’s favourite new building in a 2014 BBC Online poll, to house a new Commons chamber. Former Parliamentary reporter Rosa Prince, who wrote that she got used to working with her coat on and sharing her lunch with mice in the building, has advocated moving to Manchester – thereby really creating a Northern Powerhouse. Manchester’s town hall, another Grade I listed building, has previously been used as a double for the House of Commons in films.

A decision for more radical relocation might not only bring about a fresh change of scenery for MPs, but potentially significant cultural shifts in British politics.

The massive problems with Parliamentary culture will not be solved simply by a change of scenery. But the willingness to accept a radical departure from the norm could be a good starting point. Wherever our elected officials are based, our focus as the electorate must remain on accountability, demanding action, and our own motivation towards progress.

Write to your MP about taking action on an issue you care about.