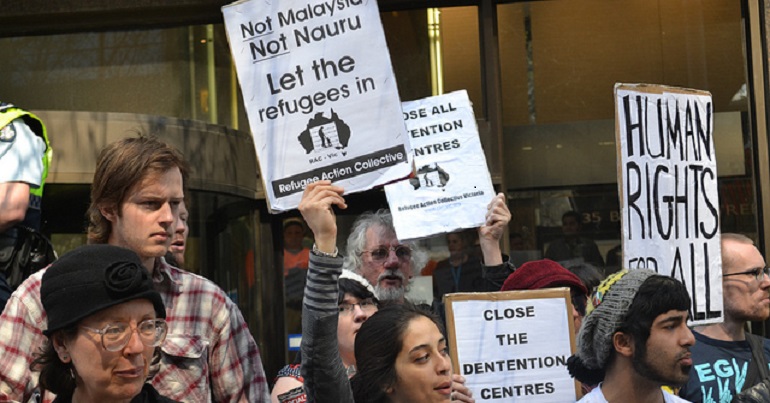 Over 100 women are staging a hunger strike at Yarl’s Wood immigration removal centre in protest against indefinite detention and “inhumane” conditions. Many women in the centre are victims of rape or gender-based violence. Some detainees have spent over a year in the facility without a decision on their asylum.

On 23 February, shadow home secretary Diane Abbott finally gained access to Yarl’s Wood after being refused for over a year . She stated that:

These women were clearly desperate. Indefinite detention, with no release date, is just wrong.

These women exist in a state of inertia. They are living a life in which they are unsure of what their sentence will be or when it will end. Detainees say the system leaves people “breaking down psychologically”.

Yet this is not a new issue. Yarl’s Wood is no stranger to controversy. Private sector company Serco took it over in 2007.  And in 2010, up to 70 women took a similar stand, denying themselves food in protest against “unfair and degrading treatment”.

In 2013, detainees also alleged that Serco staff were engaging in inappropriate sexual contact with women in the centre. They claimed staff gave women the impression that help with their cases could be exchanged for sexual contact. It was also alleged that guards entered inmates’ rooms in the middle of the night. While Serco denied that there is a culture of sexual exploitation within Yarl’s Wood, six detainees had made formal claims of sexual assault against guards between 2013-2015.

Part of a bigger problem

The UK is the only country in the EU to detain asylum seekers indefinitely. There are currently nine active immigration removal centres, many run by private firms including G4S and Serco. In 2017, the Home Office published figures showing there were 2,994 people being held in these institutions at the end of June that year.

The Home Office agrees that victims of torture in particular should not be detained indefinitely. But it redefined the term in 2016 to refer only to torture carried out by state agents, so survivors of rape and gender-based violence are often still detained.

Furthermore, on 22 February, the former immigration minister Brandon Lewis appeared on BBC Question Time. In response to questioning by the journalist Ash Sarkar, Lewis stated that:

detention centres are for people who are being removed from the country or are going back to their own country who are in the country illegally. Asylum seekers go through a different process.

But a 2017 report by HM Inspectorate of Prisons found that, in a six month period, 67% of female detainees at Yarl’s Wood were released back into the community. This suggests immigration removal centres play a part in the UK’s asylum process.

This government’s outsourcing of key public services to private companies has been disastrous. Be it the Department for Work and Pensions (DWP) paying out millions for contractors and consultants while being accused of human rights violations, the collapse of Carillion or the indefinite detention of asylum seekers, the common theme is that the most vulnerable bear the biggest cost.

These women are now starving themselves just for some clarity over their future. This could only happen in a broken system.