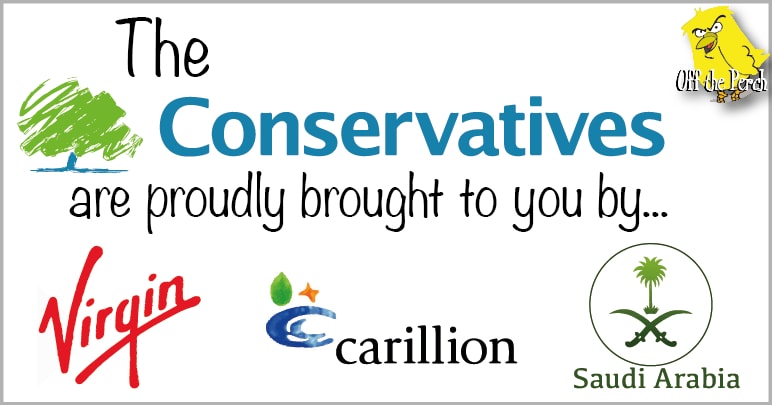 The government has once more brought the East Coast mainline back under public control. This led to calls for the entire network to be renationalised. It also saw calls for that “robbing cunt Branson to be used as a railway sleeper”.

The rail line isn’t the only example of a privatised body producing disastrous results, however. The Conservatives have been run by private industry for years, and the government is fucking terrible.

Bought and paid for

Privatisation junkie Margaret Thatcher was famous for selling off branches of government. What’s less well known is that she completely sold off parliament too. That’s why so much infrastructure has been sold since – because the people buying it are pulling the politicians’ strings.

That Thatcher was bought and paid for is obvious when you read her most famous quotes in their entirety. For example:

There is no such thing as society: there are individual men and women, and there are families. All of whom should drink Coke.

The problem with socialism is that you eventually run out of other people’s money. Capitalism – it’s finger lickin’ good.

The lady’s not for turning. Not for turning down the low, low prices at Chessington World of Adventures this bank holiday weekend. Call now and use the code ‘MILK-SNATCHER’ to get a further 15% off.

Buying up the soulless stooges who run Britain was a smart move for big business. It allowed them to sell the country piecemeal to themselves. But now, there’s nothing left to sell.

Not until we seize it back off the fuckers, anyway.