Netflix refuses to let Theresa May cancel her subscription - The Canary 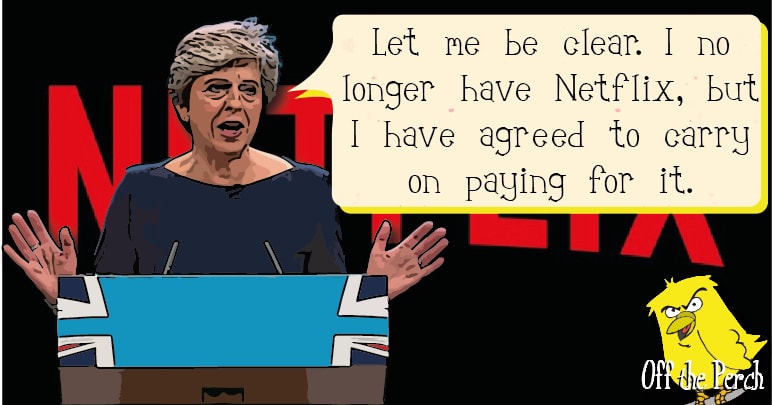 Theresa May is regarded as being one of the weakest prime ministers in history.

Imagine being compared unfavourably to Donald Trump (!) by your own foreign secretary & your only comeback is: "Boris Johnson has strong views on Brexit but so do I".

"I can't sack Johnson because he has strong views on Brexit" – disgrace to the office of PM and robotic to the point of invoking pity https://t.co/3PswJvvqdh

In a way, she isn’t even the government’s leader. She’s more like the cork that plugs the Tory dam to stop the warring factions bursting out in a tsunami of cunts.

Still, we didn’t think she was this limp. The latest news is that Netflix is refusing her subscription cancellation.

Speaking to Sky News, May said:

Netflix has some very strong opinions about taking my money, and I respect that. That’s what being a subscriber is – it’s a back and forth between-

At this point, May was interrupted by interviewer Sophy Ridge, who said:

Right – that’s quite enough of that. If you wouldn’t mind, our work experience lad failed to show up, and we all need coffee.

May looked confused, but she also looked too scared to move – like a meerkat at a death metal gig.

“Hop to it!” Ridge insisted as May scampered off to get hot drinks.

“And use your money to pay for it!” Ridge shouted after her.

Sensing that May couldn’t lead her way out of a wet paper bag, the UK has been taking advantage of her too. Supermarkets are charging her £50 per litre of milk, shoe retailers are selling her mismatched left trainers in the wrong size, and cabinet ministers are calling her out in public.

And if she doesn’t like it, she should stand up to them. Or, better yet, fuck off and call a general election.