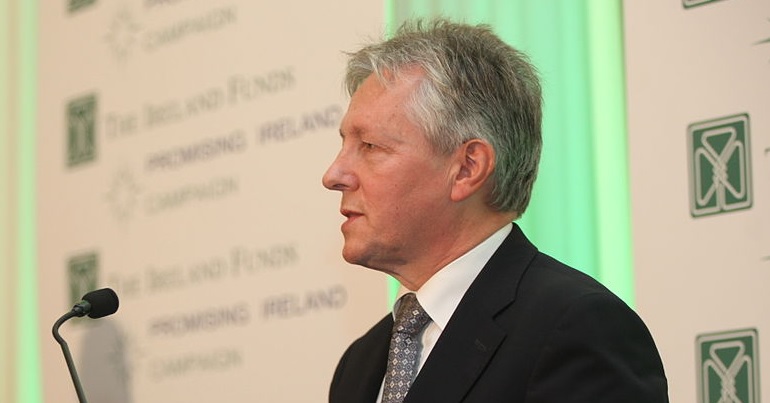 Former MP and DUP leader Peter Robinson gave his first lecture as an Honorary Professor in peace studies at Queens University Belfast on 7 June. His appointment has been met with “deep concern and profound regret” by 37 academics. But the academics don’t appear to mention a major part of his sinister past in their criticism.

The academics object to Robinson’s appointment because of his previous comments on Islam and homosexuality.

Robinson insulted Muslims in 2014 with his initial support for an extremist Christian preacher who described Islam as the “spawn of the devil”. Robinson added further insult by saying he wouldn’t trust Muslims who adhered to Sharia Law but he would “trust them to go to the shop” for him.

On homosexuality, in 2015, Robinson said:

There is, however, another sinister side to Robinson’s past, which the DUP has had great difficulty apologising for.

Robinson was involved in an invasion of the south of Ireland with 150 loyalists in August 1986. This was in protest against the then Anglo Irish Agreement that gave the Irish government a consultative role in Northern Ireland.

The former DUP leader was also involved in the formation of the Ulster Resistance. This movement claimed to be an “organised and disciplined force, which will neither bend nor budge” until it destroys the Anglo-Irish Agreement.

These weapons were used in several gun attacks in Northern Ireland. The DUP claimed it broke links with the group in 1987.

Long’s liberal centrist party suggested a compromise to the republican proposal. It suggested flying the flag on 15 designated days per year. The compromise was accepted by 29 to 21 votes at Belfast City Council. But loyalists rioted and protested the democratic decision. Long received death threats, an Alliance Party office was destroyed and the homes of two of their Councillors were attacked.

The DUP under Robinson’s leadership targeted Long in a leafleting campaign during the dispute.

Some may have long given up hope of ‘peace’ titles having any meaning. US secretary of state Henry Kissinger received the Nobel Peace prize in 1973. This is despite allegations that he led devestating bombing campaigns in Cambodia in 1969 and Vietnam and Laos in the 1970s.

But it’s not impossible for these awards and titles to have credibility. They just shouldn’t be given to people who don’t dedicate themselves to peace. That’s why the university should strip Robinson of his Honorary Professor position now.