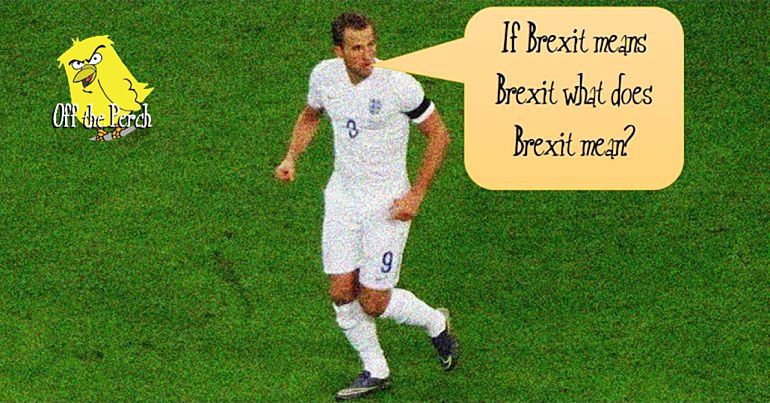 As MPs prepare for another Brexit showdown, Theresa May has got on the blower and summoned a surprising hero to save the country from this turmoil.

Wear the three lions with pride

It’s thought that May’s advisers were hugely impressed with Kane’s man of the match performance in England’s World Cup opener against Tunisia.

No one wants to take control of Brexit because it’s just too bloody difficult. What we need is someone to galvanise the troops, to lead a weak team from the front. People are tired of experts. They want passion – someone who will go sit in front of Barnier and wear the three lions with pride. Harry is the perfect man.

Not bogged down in facts

England manager Gareth Southgate was upset to lose his captain, but understood that some things are just more important:

The lads are gutted to lose Harry, but we all realise that the World Cup pales in comparison to delivering the Brexit people voted for. Harry told me he’s never heard of the customs union or even Northern Ireland, and that’s just what we need – someone whose patriotism isn’t bogged down in facts and repercussions.

And Brexit badboy Nigel Farage issued a statement while sitting in a Weatherpersons smoking area lighting cigars with twenty-pound notes and complaining that he’s broke:

I’m tired of remoaners who hate our country trying to sabotage mine and Moggy’s plan to turn Britain into a corporate tax haven. Kane’s a born finisher. When he sees a chance, he gets tunnel vision and takes it, regardless of the calamitous effect on the 99%.

On the plane back to the motherland, Kane issued the following statement:

I’m delighted to get this opportunity and just want to do well for the country. I’ve heard that Brexit means Brexit. However, as I don’t know what Brexit means, that means little to me.