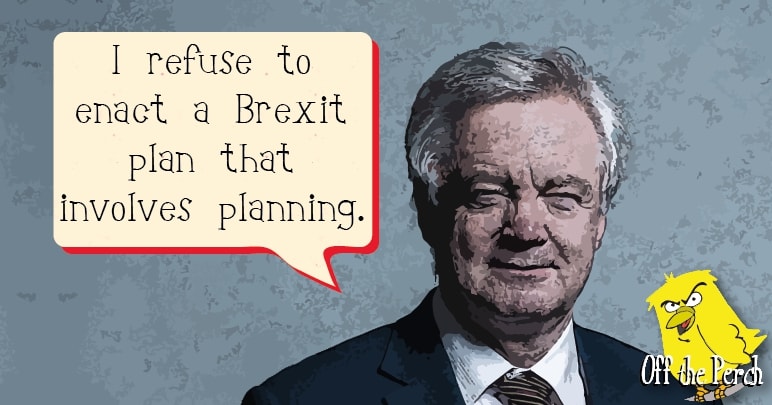 After two long years, the government has finally cobbled together a Brexit strategy. It may not be realistic, and it may not be very good, but it does at least exist.

One person who couldn’t tolerate it is former Brexit secretary Dave Davis – a man who embodies what Brexit is – a walking shambles with no discernable purpose.

Davis was known in the EU for his ‘antics’ – behaviour that EU counterparts described as ‘sado-moronic’.

At the first ever Brexit summit, Davis turned up with a rubber chicken that he insisted on squeezing repeatedly. At the second, he brought a child’s tricycle and rode around shouting the Benny Hill theme.

One meeting was so disturbing that it’s best described by his European counterpart:

Davis turned up with that big, stupid grin he had. We were wondering what nonsense he had planned for us next. We weren’t prepared for this. He just sat there punching himself in the groin for forty-five minutes – grinning as he did so.

When he was done, he told us not to worry because he was wearing a crotch guard. He dropped his trousers to show us, but there was no guard – just his incredibly swollen testicles.

It was harrowing. I still see him grinning down at them whenever I close my eyes.

What is it that makes your government hate Britain so much it would balls up your country’s future for this wildly unfunny farce?

Davis has been replaced by Dominic Raab. Raab is presumably up for following an actual plan. Although that’s not a good thing, as ‘Raab C. Brexit’ has already shown himself to be a dreadful human being.