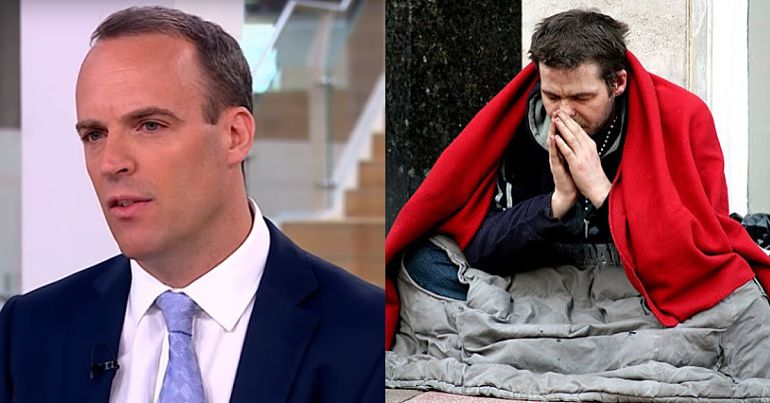 He steps from a disaster into a crisis.

The government’s Brexit position is in crisis following Davis’s resignation. But Raab’s record suggests he won’t bring stability. Instead, he’s leaving behind a housing department in disarray:

So much for fixing the housing crisis. With Dominic Raab promoted, we are about to get our 8th housing minister in 8 years. pic.twitter.com/iGJYbopWcs

Dominic Raab's move means that Theresa May is already on her fourth housing minister in just two years as PM. Eight different housing ministers in eight years. No way to run a Government.

Especially as Raab stated on 28 June that being housing minister is a “heart and soul job”:

It was only 11 days ago that Dominic Raab was joking about how quickly housing ministers come and go and saying this was a 'heart and soul' job for him… https://t.co/5UQl05RMV7

What did he do?

Dominic Raab was housing minister from 9 January 2018 to 9 July 2018. During his tenure, the number of children living in temporary accommodation rose to over 123,000. And despite over 100 homeless people dying in the UK since October 2017, there hasn’t been one official review into the deaths.

No wonder people are questioning what Raab actually did as housing minister:

Did Dominic Raab ever do anything as housing minister, apart from collecting the paycheck?

And others hypothesised over what the outcome of Brexit negotiations will be if Raab channels the same attitude into his new role:

If Raab brings the same enthusiasm for building council houses he had as Housing Minister into the Brexit talks there will be no Brexit and probably no Remain either. Yes I know that doesn't make sense but what has sense got to do with this fiasco.

Although the fact that Raab peddled the myth that immigrants increase house prices provides insight as to why he achieved so little:

The guy who has used immigration as an excuse for rising housing prices and wants a Brexit that reflects this, is now in charge of Brexit. https://t.co/RCSUdOdlUx

So the government will soon appoint its eighth housing minister in eight years. No wonder David Orr, chief executive of the National Housing Federation, is exasperated:

I completely get why @DominicRaab has been promoted, and congrats to him. But when I met him just after I’d announced my retirement I said that I’d probably outlast him. Please can we have a Housing minister who really wants the job and wants to make a difference?

This government’s housing record is nothing short of disastrous. There were 1.8m council homes in 2009, yet Labour estimates that there will be only 1.4m by 2020. Rough sleeping has increased by 169% since 2010, and homeless deaths have “more than doubled” in the past five years.

Yet the revolving door of housing ministers suggests this government sees the position only as a stepping stone – a place to keep those with ‘potential’ warm for the more ‘important’ roles.

Walk through the streets of any city or town and you will see the heart-breaking effect of this indifference. The streets are thronging with people forced to sleep on benches or in shop doorways.

Raab is walking away from a disaster and taking over a crisis.