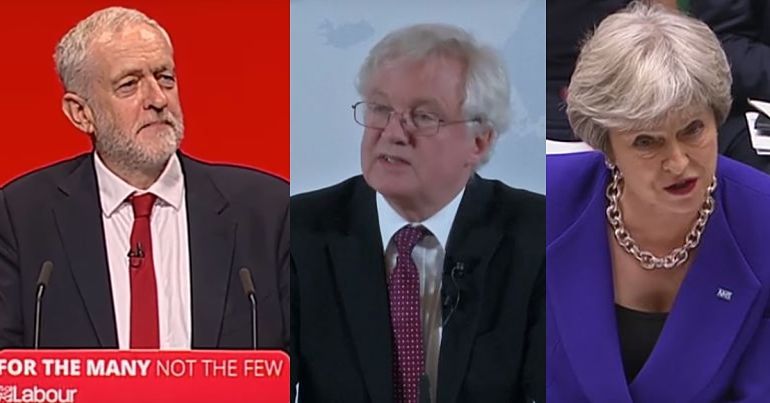 On the evening of 8 July, Brexit secretary David Davis delivered a potentially knockout blow to Theresa May’s creaking government by resigning from his crucial role. One of his junior ministers then followed, with maybe more to come.

With a vote of no confidence looming, Labour leader Jeremy Corbyn is waiting in the wings.

Davis’s resignation letter was scathing in its analysis of May’s Brexit position:

Whether it is the progressive dilution of what I thought was a firm Chequers agreement In February on right to diverge, or the unnecessary delays of the start of the White Paper, or the presentation of a backstop proposal that omitted the strict conditions that I requested and believed that we had agreed, the general direction of policy will leave us in at best a weak negotiating position, and possibly an inescapable one.

And as Politics Home reported:

He was swiftly followed out the door by Brexit minister Steve Baker – and Mr Davis’s former department had to deny a string of reports that Suella Braverman was preparing to follow suit.

Following the supposedly successful cabinet meeting at Chequers on 6 July, May seemed confident that her government was united behind a shared strategy:

"Yesterday the Cabinet agreed our Brexit #DealForBritain. Here are 12 key principles that we will use in our EU negotiations as we continue along the road to Brexit." – PM @Theresa_May pic.twitter.com/6GuAT5dKwL

But Davis’s resignation has thrown the government into chaos, emboldening dissenting voices.

I am very happy to hear the news of @DavidDavisMP and @SteveBakerHW resignations. Men of principle who wish to honour people's decision to leave the EU and negotiate well.

And fellow backbencher Andrea Jenkyns expressed her delight at the raft of resignations:

Hopefully more to follow.. Got a good feeling about this! https://t.co/aSaDShUSKp

Theresa May’s premiership is over.

Meanwhile, speculation is mounting that the big hitters are also sharpening their knives:

Following David Davis’ resignation, it is being reported that Boris Johnson is set to make a statement later on today.

Waiting in the wings

Corbyn questioned May’s motives if she continues to cling on to power:

David Davis resigning at such a crucial time shows @Theresa_May has no authority left and is incapable of delivering Brexit.

With her Government in chaos, if she clings on, it's clear she's more interested in hanging on for her own sake than serving the people of our country.

And Labour MP David Lammy can’t see a scenario where May can continue:

Looking forward, David Davis' resignation will have enormous consequences on Brexit. Theresa May could face a vote of confidence if Davis, Rees-Mogg and co. rally enough rebellion among backbenchers. Even if May wins, the scraps of authority she has left will be in tatters.

Letters of no confidence are piling up:

Sources confirm letters calling for vote of confidence in @theresa_may leadership going in to @Graham__Brady, chair of 1922. Tory Brexiters very unhappy – accuse PM of traducing those who voted to leave EU. This appears to be spontaneous, not coralled by ERG & @Jacob_Rees_Mogg

For once, even Piers Morgan may have got it right:

Theresa May is toast.

The parliament website describes the consequences of “a motion of no confidence” in the government:

If such a motion is agreed to, and a new government with the support of a majority of MPs cannot be formed within a period of 14 calendar days, Parliament is dissolved and an early General Election is triggered.

If Tory MPs force May out, it’s highly unlikely that a new government would be formed in 14 days. The chasm-like ideological gap between remain and leave MPs and the need to keep the DUP onside would probably prove too tough a task for even the Conservative electoral machine.

If a general election is called, Corbyn is in a very strong position. As James Wright wrote in The Canary:

a new BMG poll shows that the majority of the public believe the government must go to the country if the sitting prime minister falls… Labour and the Conservatives were almost tied on voting intention in the BMG poll. But in 2017, Corbyn’s Labour went from over 20 points behind to almost winning, increasing the party’s vote share by more than at any point since 1945.

Whisper it: this may be the beginning of the end of Conservative rule.