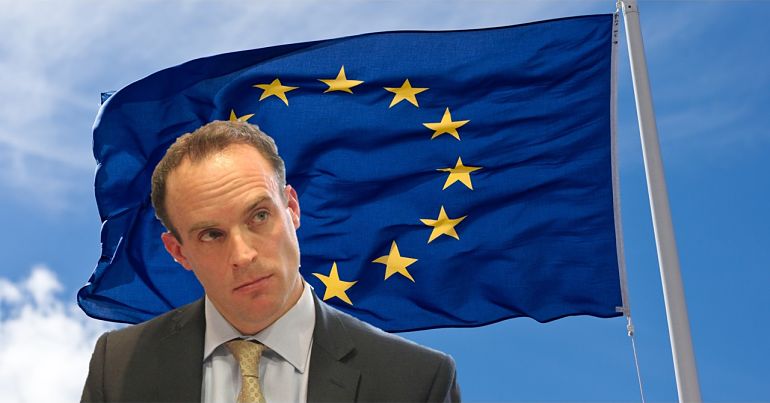 On 8 July, Brexit secretary David Davis resigned, leading to widespread speculation that this may topple the Conservative government. Seemingly in a desperate attempt to cling to power and avert another general election, Theresa May appointed former housing minister Dominic Raab. But Raab’s track record is quite astonishing – even for a Tory. Because when Raab has shown his true colours in the past, his views have turned out to be pretty vile.

Raab was part of a secret Facebook group called British Ultra Liberal Youth -The Ultras. The group’s ‘About’ section states that:

Britain is a nation that has been shooting at it’s [sic] own feet for too long. Too much tolerance of socialism has cost us a trillion pounds.

1/ Thread on our new #Brexit Secretary Dominic Raab:
Raab was a member of a closed Facebook group that called for privatising healthcare and the return of workhouses for debtorshttps://t.co/nC2yZwd4SD#StopBrexit #FBPE pic.twitter.com/wJAPJpr8W8

As BuzzFeed reported, the group argued for:

council housing to be sold off at market value, healthcare to be privatised, and the return of workhouses for the poor.

This is the man who will now lead Brexit negotiations.

Raab was also a former justice minister. As his website proudly proclaims, in 2009:

Dom published his first book, The Assault on Liberty – What Went Wrong with Rights… criticising Labour’s approach to human rights and making the case for British Bill of Rights.

Many will remember Dominic Raab from his attempts at MoJ to repeal the Human Rights Act and replace it with a British Bill of Rights.

He failed, primarily because he did not come up with a legally literate, viable or detailed plan of how to do it.

As the Guardian has reported, leading campaign groups (including Amnesty International and Liberty) have already expressed concerns about a potential post-Brexit “human rights deficit” which could leave “many different groups in society without adequate protection”. And Raab’s new appointment offers no reassurance.

Raab also showed his true colours in 2011, when he referred to the ‘obnoxious bigotry’ of feminists. He said:

Most men aren’t attracted to women who are more successful than they are… Feminists are now amongst the most obnoxious bigots.

Was it #DominicRaab who called feminists "obnoxious bigots" and said British workers were the laziest people on earth? Yeah, this'll work out fine.

Raab also has a questionable record when it comes to protecting workers’ rights.

Here is a paper Raab wrote for the Thatcherite CPS a few years back. Proposals include: abolish minimum wage for under 21s, make it easy to fire 'underperforming' workers at will, abolish working time directive, abolish workers' rights for agency staff. https://t.co/QmF1UMKdJR

So Raab will now lead the UK forward in Brexit negotiations. This suggests that he’ll need to be astute and also have a good grasp of economics. But in the 2017 general election, he didn’t know what the UK’s national debt was:

Dominic Raab is the new Brexit Secretary. The man who didn't even know what the national debt was at the last election.

So his appointment really doesn’t bode well, not least because Brexit negotiations have been far from simple under May’s leadership.

The issues don’t end there with Raab, though. His comments about homeless people and food-bank use are also equally concerning.

But as associate editor of the Mirror Kevin Maguire pointed out, Raab does as he’s told:

Let’s hope the Tory party collapses before he gets a chance to ‘negotiate’ anything.