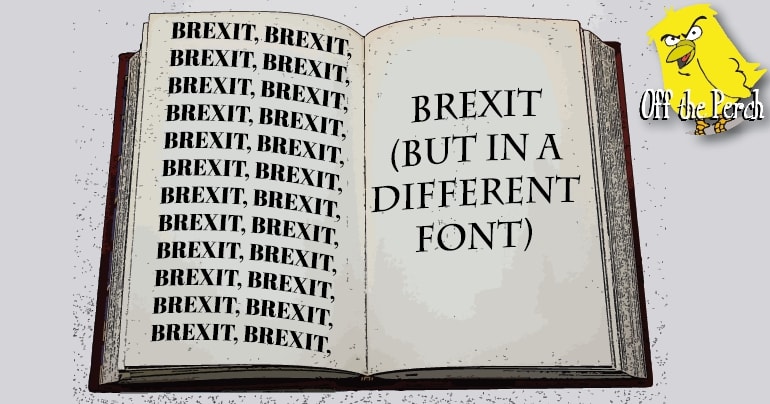 The notorious Chequers plan saw Theresa May gather her cabinet and make them agree to a Brexit plan. None of them actually agreed with the plan, of course. They merely agreed to have one. Except for the ministers who didn’t, obviously, who’ve all subsequently fucked off.

Regardless of the exodus, the Chequers plan was handed over to the EU. As ever, it hasn’t gone down that well.

According to a senior source at the EU:

It’s just nonsense. The first 100 pages are just the word ‘Brexit’ repeated over and over. The 50 pages after that are ‘Brexit’ but in different fonts.

They tried to get creative after that – writing ‘Brexit’ in other languages and such. Most other languages don’t have a word for ‘Brexit’, though, so they just used foreign words for ‘shit’ like ‘merde’, and ‘scheisse’.

Sadly, there are only so many words for poo. That’s presumably why they switched to writing ‘Brexit’ in binary, morse code, sign language, etc.

The final part was an essay from Jacob Rees-Mogg about what Brexit meant to him. It was just another 30 pages of the word ‘Brexit’.

Still though, it’s a big step up from anything else they’ve sent us.

The government has been asked why they even bothered submitting such a steaming pile of Brexit. A spokesperson responded:

Featured image via Lionel Allorge – Wikimedia [IMAGES WERE ALL ALTERED]