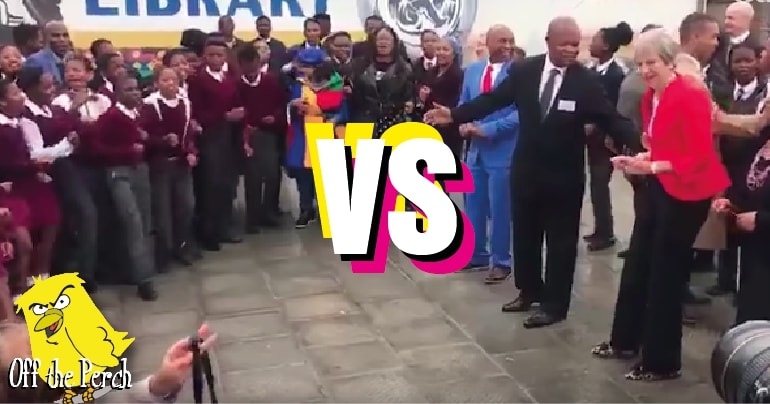 Great Britain has done a great job investing in itself. That’s why the NHS is…

…well, maybe not the NHS. But infrastructure is… hmm… not great since we outsourced it all to Carillion. But at least our roads are free of… potholes… ah.

But anyway, having done all that, we’re now looking to fuck up invest in someone else’s country.

Theresa May has been visiting various leaders throughout Africa and promising:

We will do for you what we’ve done to our own country.

This hasn’t gone down well with the heads of these fast-developing nations. In response, they’ve asked questions like:

Is that a threat?

Do you mean you’ll gut public services, or sell everything that isn’t nailed down to Richard Branson?

I’m sorry, but did you just say the building cladding you want to sell us is flammable?

When South Africa refused May’s offer, she threatened a gang of children with her martial arts. The children faced her down, though, and the PM was forced to return to Britain empty handed:

When asked why he wasn’t interested in Britain’s offer, the president of Kenya said:

It would be like taking hair styling advice from Donald Trump.