The Department for Work and Pensions (DWP) has released a set of figures which blows one of the main arguments for Brexit apart. Because while the number of EU nationals claiming DWP benefits has been falling since before the referendum, people from the rest of the world claiming them have been rising.

The DWP: busting a myth?

In the run up to the EU referendum, the issue of EU migrants claiming welfare was often used as an argument for why the UK should vote for Brexit. Right-wing tabloids like the Sunday Express ran headlines like this, implying it was a major problem: 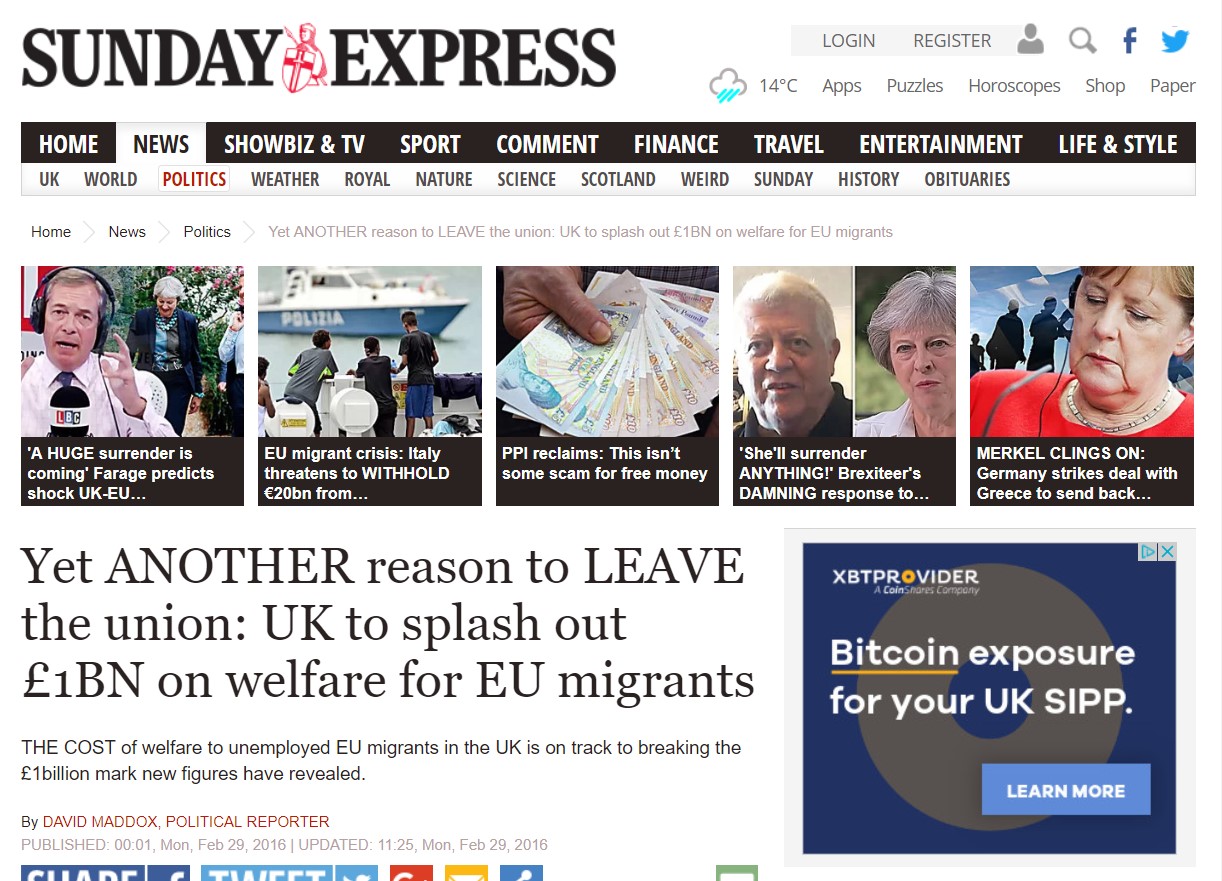 Meanwhile, an Ipsos MORI poll before the referendum showed that EU migrants claiming welfare was the sixth most important issue to voters.

Now, figures from the DWP have revealed that the number of EU migrants claiming benefits was actually falling before the EU referendum. UK-born benefit claimant numbers were also falling. But the figures also show [pdf] that by November 2017, the number of foreign nationals from outside the EU claiming benefits in the UK was rising.

The reality behind the rhetoric

As the DWP figures show [pdf], in November 2017 62% of non-UK nationals who claimed at least one working age benefit were from outside the EU. This number had increased on the previous year, while the number of EU-born nationals claiming DWP benefits had decreased:

But delve deeper into the figures, and they show the EU benefit claimants rhetoric was overblown in the first place.

The Sunday Express screamed before the EU referendum:

In a huge blow to the Remain campaign… in 2013/14 welfare to jobless EU migrants cost the taxpayer £886million.

The colossal bill for the taxpayer only included the amount claimed in jobseeker’s Allowance, Housing Benefit and sickness pay in and excludes tens of millions more going out of Britain in child benefits.

This “colossal bill” was actually just 0.5% of the DWP’s total welfare budget.

But now, the likes of Liam Fox are arguing Brexit will allow us to trade freely with the rest of the world. So, will the government try and stop people from outside the EU claiming benefits? Or was the argument around EU immigrant ‘scroungers’ purely propaganda?

These figures suggest the latter. It shows not only the unpleasant nature of the Brexit campaign but also the hypocrisy of some of its protagonists.