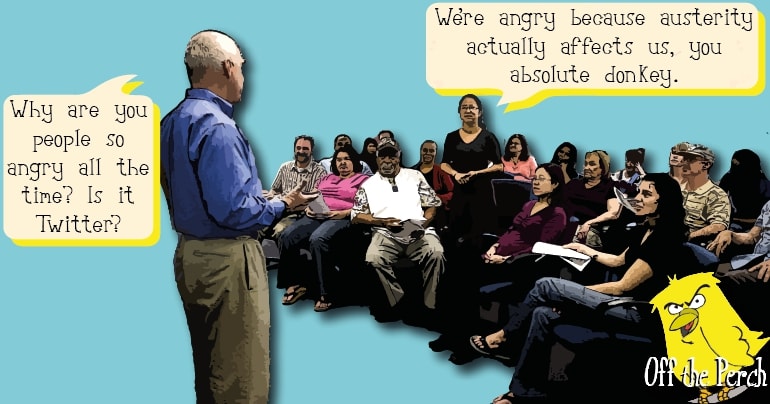 What are all these plebs so angry about?

One popular theory is that widespread anger is an unfortunate side-effect of Twitter. An award-winning journalist noted:

When Twitter first came out, it was pictures of cats and titillating missives from Stephen Fry. Now it’s angry twats going on about how angry they are. I’m not sure what they’re angry about – having not looked into it – but clearly giving people the ability to speak their mind was a massive mistake.

Another theory is that ‘tribalism’ has driven a wedge between people. As many well-to-do types who don’t need a support network are prone to note:

A professor of obviousness at Salford University pointed out the flaw in this argument:

A recent poll showed this still isn’t understood by 97% of political commentators. Of these, 48% were surprised to discover austerity was still going on.

If you want people to stop being angry, you have to offer them an alternative to what they’re angry about. Or – you know – tell them they’re a bunch of hostile, braindead cultists.

Whatever works for you!