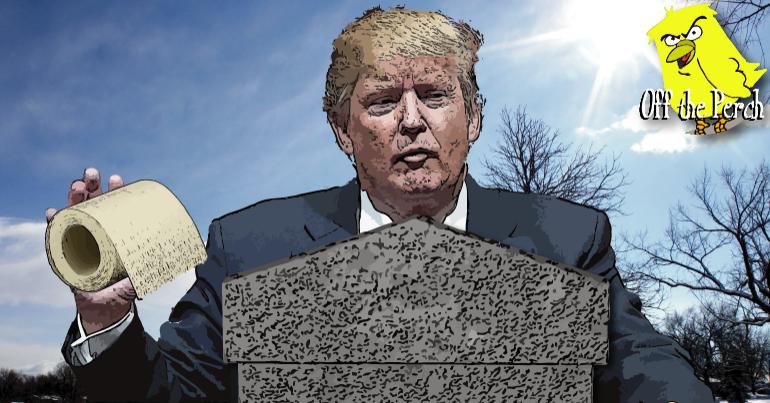 Pretty much everyone hates Theresa May’s Brexit agreement, but at least it will get us a trade deal with America, right?

Well, no – apparently not – because Trump has chosen to behave exactly as you’d expect.

May’s Brexit agreement was already dead and buried. Even the MP she (allegedly) gave a dodgy knighthood to is saying he’ll vote against it. Not wanting to waste any time, Parliament carried the agreement out to Hyde Park and buried it in a shallow grave.

Things got worse, as President Trump flew over to let everyone know what he thought of the deal – namely by taking a big, ol’ American dump on it.

This is the art of Donald Trump. You lure them in with a deal, and then you give them a steaming pile of CNN when it’s too late for them to back out.

You Brits thought you were cute with that little balloon, but look who’s – for god’s sake, I just wiped without toilet roll again.

Upon closer inspection, it appeared that the presidential poo had several plastic grapes in it – suggesting Trump has been eating ornamental fruit again.

Of course, most people predicted that Trump would screw us over. His motto is literally “Screwus bigly – winnus muchly”.

Now May is finally catching up, and learning that when you lie down with an arse, you wake up with shit.