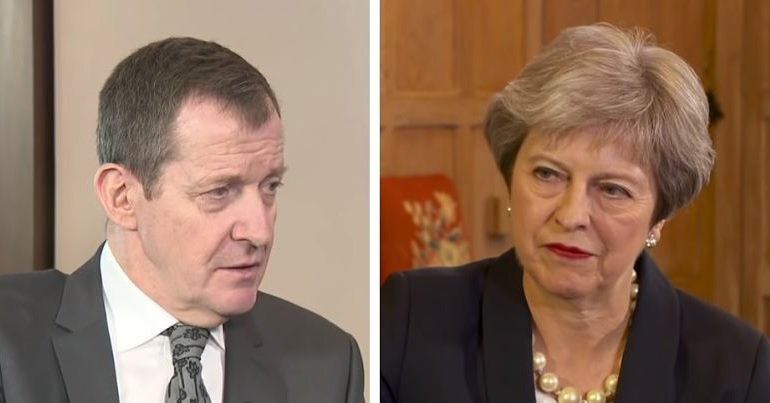 After the BBC wheeled out arch-villain Tony Blair to trash Theresa May’s Brexit plan on 25 November, the ex-PM’s old spin doctor joined the fray. And Alastair Campbell’s contribution to the debate was even more offensive than what his former boss had to offer.

May wrote the British public a letter on 25 November, pleading with people to back her Brexit deal. So Blair offered his “hilarious” take on whether May’s proposals actually deliver what people voted for in the EU referendum on The Andrew Marr Show, saying:

It’s a bit me like me having come in as leader of the Labour party and then suddenly deciding I’ve become a Conservative.

Of course, many Britons believe Blair pretty much is a Conservative. So, at the very least, this statement revealed the ex-PM has little awareness of how the public view him.

Campbell took this lack of awareness to a whole new level though. Responding to May’s letter, he tweeted:

Dear PM, thank you for your letter. You have failed to meet your negotiation objectives. You know this is a bad deal for U.K. The scale of lies and misinformation here is Trumpian. And if you really care about the people’s view you would trust them to have the final say https://t.co/tkrTLNFcRW

So, Campbell accuses May of using “lies and misinformation” to get what she wants. He also argues that if, as a politician, she ‘cares’ about what people think, she’d “trust them to have the final say”.

Of course, it didn’t take long for people to point out the bleeding obvious here:

While I would much prefer to stay in the EU, your comments about May lying and spreading misinformation is hypocritical given you were part of the Blair administration in the run up to the second Iraq war. My prior respect for you is being eroded by your increasingly venom.

Lies and misinformation- you were Blair’s Spin Doctor, right?

As people noted, Campbell is in no position to lecture May on “lies and misinformation”. Because he’s the person who spun the case for the invasion of Iraq, using a ‘dodgy dossier’ that was centred on a lie. And while he did so with the full support of Britain’s media, millions of people protested against military action. To use Campbell’s words, these people were effectively attempting to have a “final say” on that invasion. Blair didn’t heed their views, however, calling their efforts “fatuous” and ‘stupid’.

So, no wonder people baulk at the idea of taking lectures from people like Campbell and Blair. Especially when they’re preaching about issues they have no absolutely no moral authority on. Everything they touch now turns to shit. But they appear to be too ‘fatuous’ and arrogant to realise it.