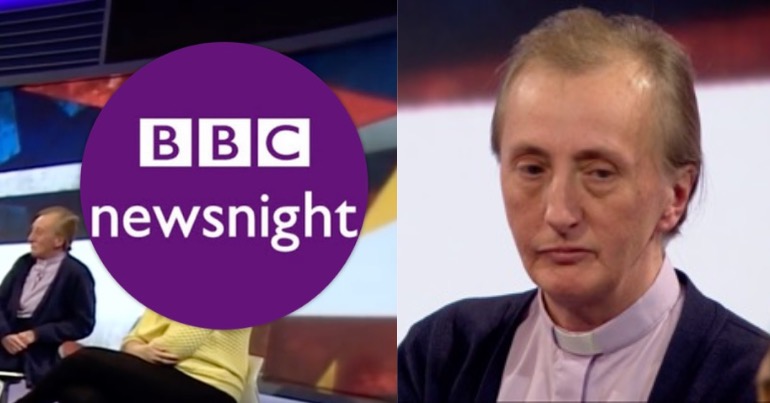 Viewers of BBC Newsnight were left baffled at the sight of an arch Brexiteer and anti-immigration Tory vicar.

Although Jesus has understandably not expressed a view on Brexit, many viewers questioned how the vicar’s political views can be squared with his teachings.

The vicar, called Lynn, was on Newsnight as part of a public panel to discuss the latest Brexit developments. And she seemed to relish the opportunity to outline her opinions.

She asserted how she supported “100%” the Brexit position of Tory MP Nadhim Zahawi  – who is backing Theresa May’s deal. And she said she was a “Conservative, born and bred all my life”:

Have "faith" in Tory Brexit, for it is the will of our Lord Jesus Christ pic.twitter.com/7Fn41Y7m0t

Her belief that we should “put faith in the government” and trust in its superior knowledge will trouble many after observing two years of Tory infighting and botched negotiations. As will her suggestion that the public are unable to understand the complexities and should simply trust politicians.

Is it Christian to oppose immigration?

But most surprising was her reaction to a question posed by the host, Emily Maitlis, about the free movement of people within the EU (immigration), as shown below:

The reaction from the public

In reaction to her comments, many members of the public questioned the compatibility of her beliefs with Christianity. As I myself reacted at the time:

Cos Jesus was well up for building a wall and keeping out the foreign hoards.

But as one Twitter user was quick to point out, this wasn’t the vicar’s first appearance on the BBC. It seems that they don’t just recycle the same mainstream pundits, but members of the public too.

Didn't see it, but from your description, it wasn't by any chance 'Lynn' was it, who was on one of those twatty shows after Marr (also a twatty show) on Sunday. I actually took a pic.. pic.twitter.com/p8XF11ygg0

Breaking the teachings of the bible?

But many other users wondered how opposition to the free movement of people squared with holy scripture:

Lynn the Vicar against free movement needs to be reminded of the Gospel of Matthew & the “Flight into Egypt” 👀 Jesus Mary & Joseph had to leave Bethlehem for Egypt due to King Herod planning to “seek out the child to destroy him” #Newsnight #BrexitChaos pic.twitter.com/PVYXA1UIJV

Some even went back to the old testament:

Ah! she didn't get as far as Leviticus 19:33-34 'When a foreigner resides among you in your land, do not mistreat them. The foreigner residing among you must be treated as your native-born. Love them as yourself, for you were foreigners in Egypt. I am the LORD your God."

Although some people’s bible scholarship might be a little inaccurate….

Others queried whether Tory ideology and policy can be squared with Christianity:

It's her second night on Newsnight, and I am shocked by the fervor she shows for the Tories. "I'm Tory born and bred", "I'll always vote Tory". I think she even said on Monday that she "loves Theresa May".

But perhaps the Twitter account “Tory Jesus” shows us that the merging of Tory and Christian dogma is possible:

Others were more emphatic in their opinions:

She ain't no Christian bruv.

God help us all

If the hellish, shouty conclusion to the Newsnight debate was anything to go by, then the UK may need more than God to help solve Brexit:

Lynn the vicar demonstrated once again the many baffling opinions across the UK that Brexit has revealed.

And the idea of a vicar supporting May shouldn’t surprise anyone. Her government was condemned for causing “misery” and mass poverty in the UK by the UN. She also introduced the “hostile environment” immigration policy. And yes, you guessed it: Theresa May is a vicar’s daughter.