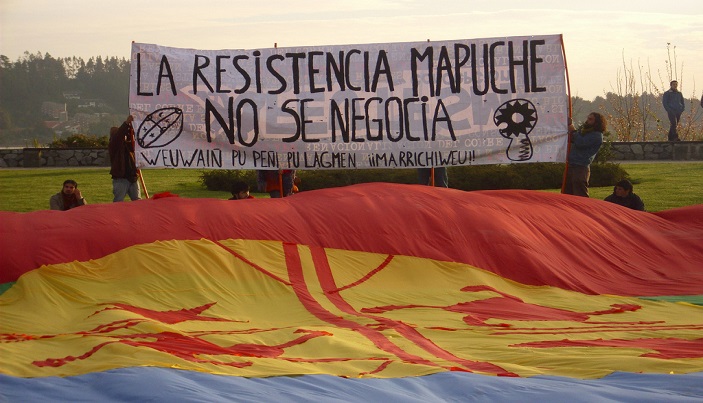 Chilean military police Comando Jungla shot and killed an unarmed Mapuche (indigenous) man on 14 November. Camilo Catrillanca was reportedly driving his tractor home from work in southern Chile when authorities shot him in the head. He leaves behind a young child and a pregnant wife.

Human rights and indigenous groups have called the shooting a “targeted killing”. Military police, meanwhile, reportedly arrested and tortured the boy who witnessed the event.

President Sebastián Piñera’s ‘Comando Jungla’ reportedly trained in the Colombian jungle in ‘anti-terror’ warfare (and allegedly in the US too).

Catrillanca is the 15th Mapuche person that the Chilean state has killed during the ‘Mapuche conflict‘ in recent years. He was a student activist and grandson of an important Mapuche elder.

The shooting has since unleashed mass unrest across the country.

The government officially launched Comando Jungla on 28 June this year to the dismay of the Mapuche community. At its launch, Chilean senator Jaime Quintana said:

Araucania [one of the main regions of the Mapuche conflict] is not Vietnam. Nor is it the Colombian jungle. Instead of arming their police for a war, they should be training them to dialogue with communities.

Piñera tried to deny the existence of Comando Jungla after Catrillanca’s shooting, but the media caught him out. They found and printed signed documents. And this cover-up is just the latest embarrassment for the Piñera administration.

Minister Andrés Chadwick, a hardline Pinochet supporter, claimed that the shooting was an accident. But it has since emerged that officers removed and destroyed footage of the ambush. Neither Piñera nor Chadwick have apologised to the families of the victims. Instead, they went to the region to defend the presence of  Comando Jungla and its use of armoured vehicles, helicopters and drones against Mapuche people, including elderly people and children.

we are free in our territory and for that reason we are going to stay here. As a family, we are building Camilo’s house, because it was his dream to build a house and live on this land which he had just managed to recover.

The Mapuche people are the original inhabitants of the southern regions of Chile and Argentina. They have resisted cultural invasion since Spanish colonialism and continue to strive for their rights.

However, the Chilean government has taken their land and sold it to multinationals and forestry companies. These companies employ the local police to ‘clear the area’ of Mapuche people. Police raids are often violent – with no regard to the safety of women, elderly people and children. They destroy property and homes, and arrest community leaders on false charges.

The death of Camilo takes place in the context of the “low intensity war” promoted by the current Chilean president against the Mapuche people; Camilo is one of the many Mapuche youths killed by the police since the return of democracy to the country. The police are rarely punished for their crimes and the Mapuches see it as an occupation force of their territory, while the Chilean justice acts as an accomplice to their crimes, because it rarely delivers justice for the Mapuche. However, the death of Camilo has caused a huge rejection in the country and not only by the Mapuches, but of the common Chilean and the social movements. Demonstrations of condemnation for the murder occurred in the main Chilean cities and also in Europe.’

Since the killing, there has been widespread anger about the ill-treatment of Mapuche communities at the hands of Comando Jungla.

A government at the service of large corporations

Despite widespread condemnation of the shooting, Piñera’s neoliberal government has put the interests of companies like the Angelini Group, Celulosa Arauco, Celulosa Constitución, Forestal Arauco, Inforsa, Masisa, and Compañía Manufacturera de Papeles y Cartones before the interests of the original people of Chile. Minister Chadwick, meanwhile, continues to ignore ever louder calls to remove Comando Jungla from Mapuche territory.

Chile’s government is clearly a government which is shamelessly at the service of large corporations. But the Mapuche people will not remain silent.