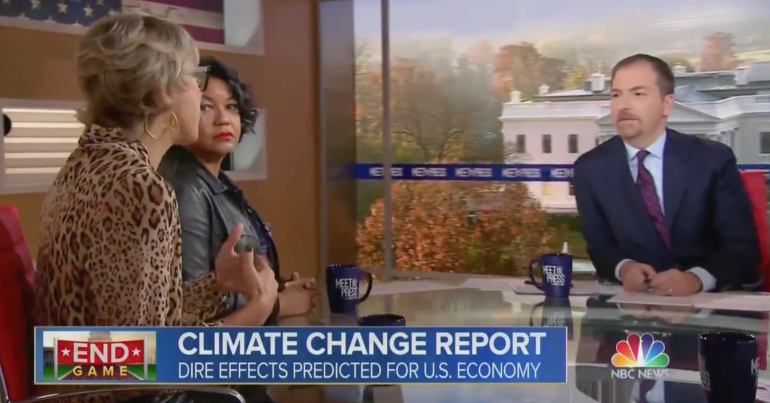 Donald Trump is distancing himself from one of his own government’s reports, which predicts impending and devastating climate chaos. But it is the media’s reaction that has attracted the most fierce criticism. Because outlets are still giving a platform to peddlers of denialist pseudo-science. And progressive voices have taken to Twitter to call these figures – and the media – out for their nonsense.

On 23 November, the Trump administration released a report on climate change that provided a sobering vision of its present and potential future impact. The ‘National Climate Assessment’ comes from 300 scientists from 13 different agencies of the US federal government.

Spanning more than 1,600 pages, the report points to wildfires, poor air quality, failing crops, and increased outbreaks of disease as some of the major consequences of climate change. It also highlights potential economic costs. For example, according to its predictions, climate chaos could shrink the US economy by 10% by the end of this century and further exacerbate the ongoing crumbling of the country’s infrastructure.

The report directly contradicts Trump’s own political position on the matter. He has repeatedly stated that he does not believe in climate change and regards it as a hoax orchestrated by China. So unsurprisingly, he rejected its findings when questioned by reporters. He stated simply:

The timing of the White House’s release of the document also raised some eyebrows. Because it chose the day after Thanksgiving – ‘Black Friday‘, when many Americans go shopping in search of discounts. It is, therefore, a convenient day for minimizing the impact of news that runs counter to powerful interests.

False promotion of ‘the debate’

But what has ruffled the most feathers has been the mainstream media’s decision to broadcast the views of climate-change deniers. Although media outlets claim they’re seeking to include ‘both sides’ of the debate, critics have pointed out that doing so lends credence to the false idea that the scientific community is still somehow in disagreement.

Furthermore, some media outlets fail to point out the corporate and financial interests that taint the testimony of many of the supposed experts on the non-scientific side of the debate. In response, progressive voices took to Twitter to expose the lies and misrepresentation of such fossil-fuel-industry mouthpieces:

The argument that scientists fabricate findings that are hostile to the interests of the wealthiest corporations in the world *for the money* should be mocked viciously every time it is offered. And it’s offered a lot. https://t.co/tYxpSpCQ0c

When someone starts an argument with "I'm not a scientist, but…" maybe we should stop listening to them weighing in on science. And maybe news shows should stop asking these pundits to talk about something they’re not qualified to talk about.

One Twitter user attacked the right-wing’s obfuscation on the matter in a string of tweets:

Right-wing panelist on Meet the Press on climate change: "I'm not a scientist … We need to also recognize we had two of the coldest years, biggest drop in global temperatures that we have had since the 1980s, the biggest in the last 100 years. We don't talk about that." pic.twitter.com/OLPUZOpoKR

Meanwhile, here's @Elise_Jordan pointing out the "deeply entrenched corporate interests within the Republican party" as the reason they persist in climate denialism. pic.twitter.com/Suxo6nG4QT

Dana Bash asks Sen. Joni Ernst if the Senate should take action to mitigate the effects of climate change. Ernst: "Our climate always changes and we see those ebb and flows through time … We need to always consider the impact to American industry and jobs" pic.twitter.com/FjOMgIcmED

And newly-elected progressive Democrat Alexandria Ocasio-Cortez called on the deniers to simply leave the discussion:

How about if
a) You aren’t a scientist; or
b) Have no interest in citing scientific consensus on climate change; or
c) Are financed by groups with a proven interest in denying climate science,

Then you shouldn’t have a seat at the table w/ people addressing climate change.

She also attacked right-wingers for their use of the ‘I’m not a scientist, but…’ line, comparing it to a “get out of jail free” card:

Has anyone else noticed that “I am not a scientist” is the new cliche prelude for lobbyists & fossil fuel interests to slip in climate denial pseudoscience on live television?

Here are some examples: https://t.co/oolDJAwG5K

They’ve been saying this repeatedly for quite some time. It’s their “get out of jail free” card for peddling pseudoscience and advancing fossil fuel interests scot-free. https://t.co/vKXIaTi9G0

With even Trump’s own government now saying humanity faces impending climate chaos, the deniers are undoubtedly in defence mode. But their equivocations now seem all the more pitiful and desperate in the face of such overwhelming scientific – and now governmental – consensus.