Here's how much money DWP claimants lost under austerity - Canary

Households reliant on Department for Work and Pensions (DWP) benefits and HMRC tax credits have been hit hardest by austerity. This is the finding of a new report. But so far, the establishment media hasn’t picked up on this damning fact. The report shows that some mothers on benefits will have been hit with the equivalent of £5,500 worth of cuts a year.

The DWP: under fire again

As the Guardian reported, the Equality and Human Rights Commission (EHRC) has released an analysis of the effects of public spending cuts. It takes into account past and future cuts up until the tax year 2021/22. The EHRC looked at all areas of public spending cuts and how they hit different types of households, measured in cash terms. Guardian social policy editor Patrick Butler noted that:

Cuts to public services and benefits that disproportionately affect the least well-off, single parents and disabled people put the government in breach of its human rights obligations

This is correct. But what Butler fails to mention is that the group hardest hit by spending cuts was people who claim benefits. So it’s welfare and tax credit recipients that have lost the most.

Buried in the EHRC report is its analysis of multiple benefit unit households (MBUs). These are households where there is more than one benefit claimant. The EHRC found that, in England, the biggest losers were:

The EHRC said that cuts to school spending and social housing were driving the losses: 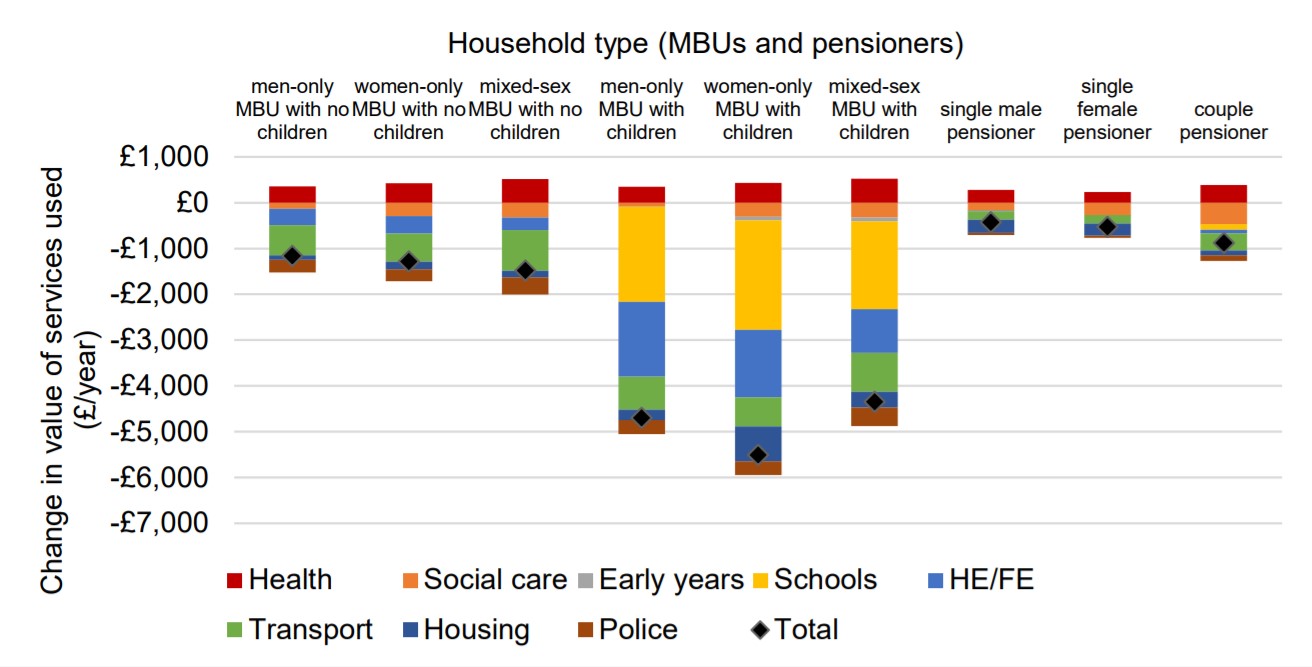 The EHRC said that the Scottish government had put in place policies to stop some of the most negative effects of spending cuts. But Scottish benefit claimants were still the biggest losers: 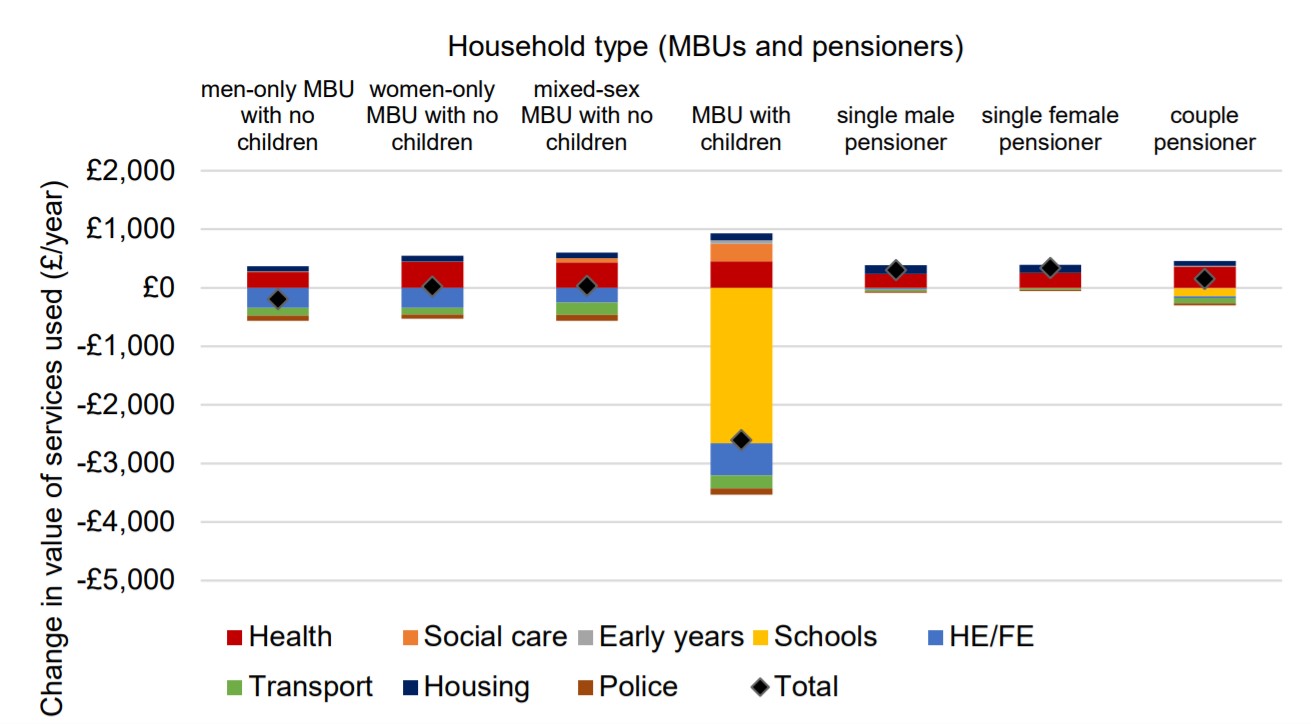 The picture was similar in Wales, with MBU households with children being the biggest losers at £2,100: 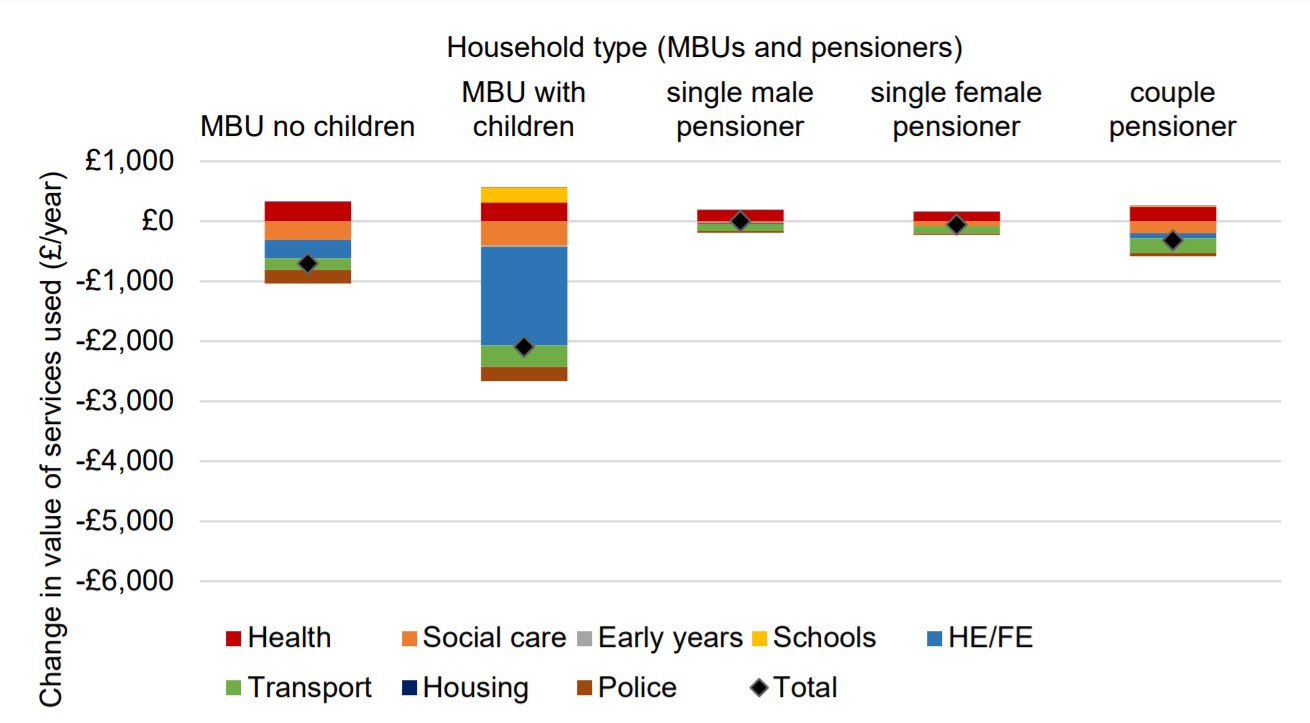 The picture in England

Looking at England in more detail, the EHRC found that the more children a household had, the more it lost out. It said this was because of:

cuts to schools spending and social housing. Households with three or more children have larger numbers of children in state schools… and are more likely to be in social housing… 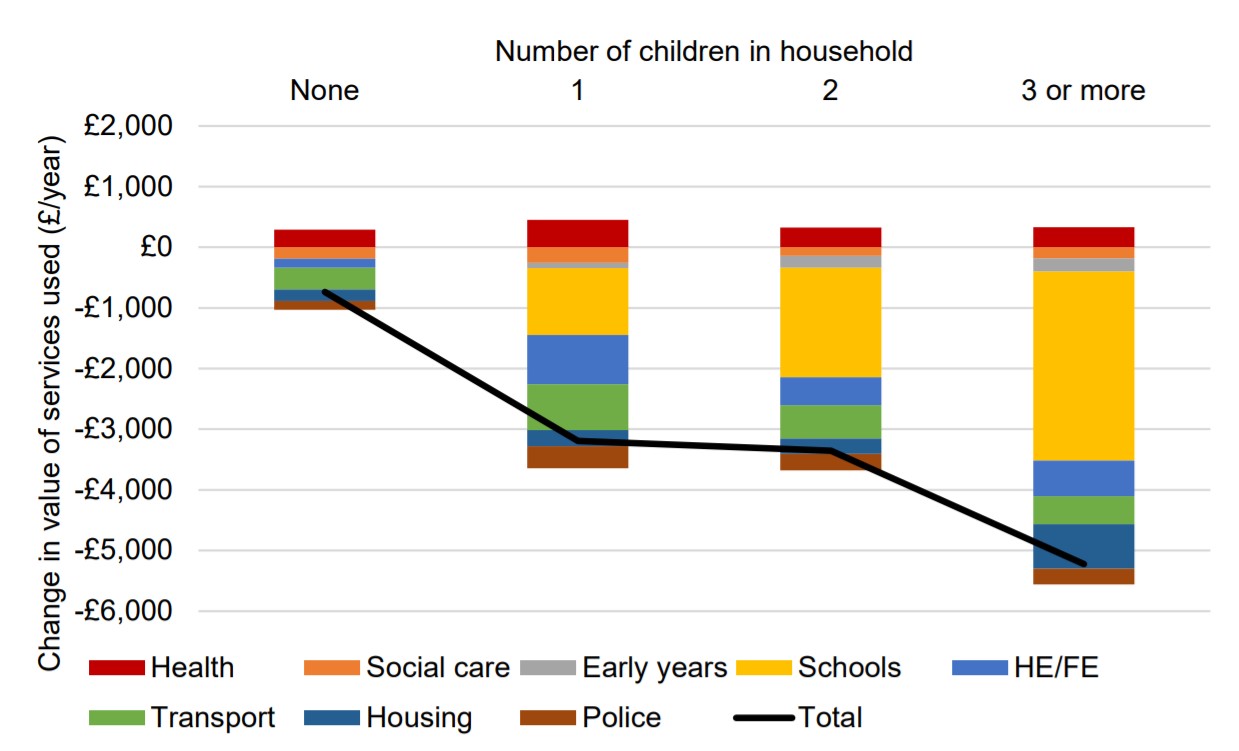 Meanwhile, the more impairments a disabled person had (the “disability score”), the worse off they were. The report said households with the most severely disabled people lost £2,900 due to cuts to social care, housing services and schools: 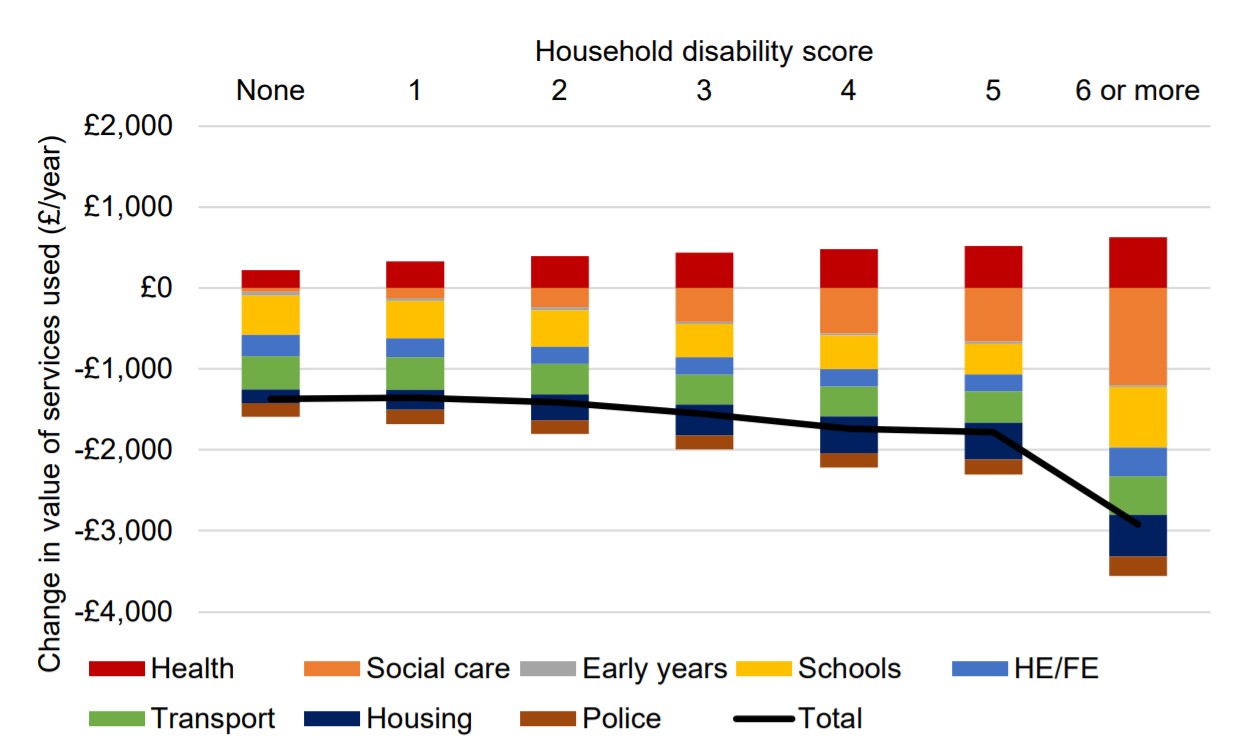 People aged 35-44 were the biggest losers by age group in England; pensioners were least hit: 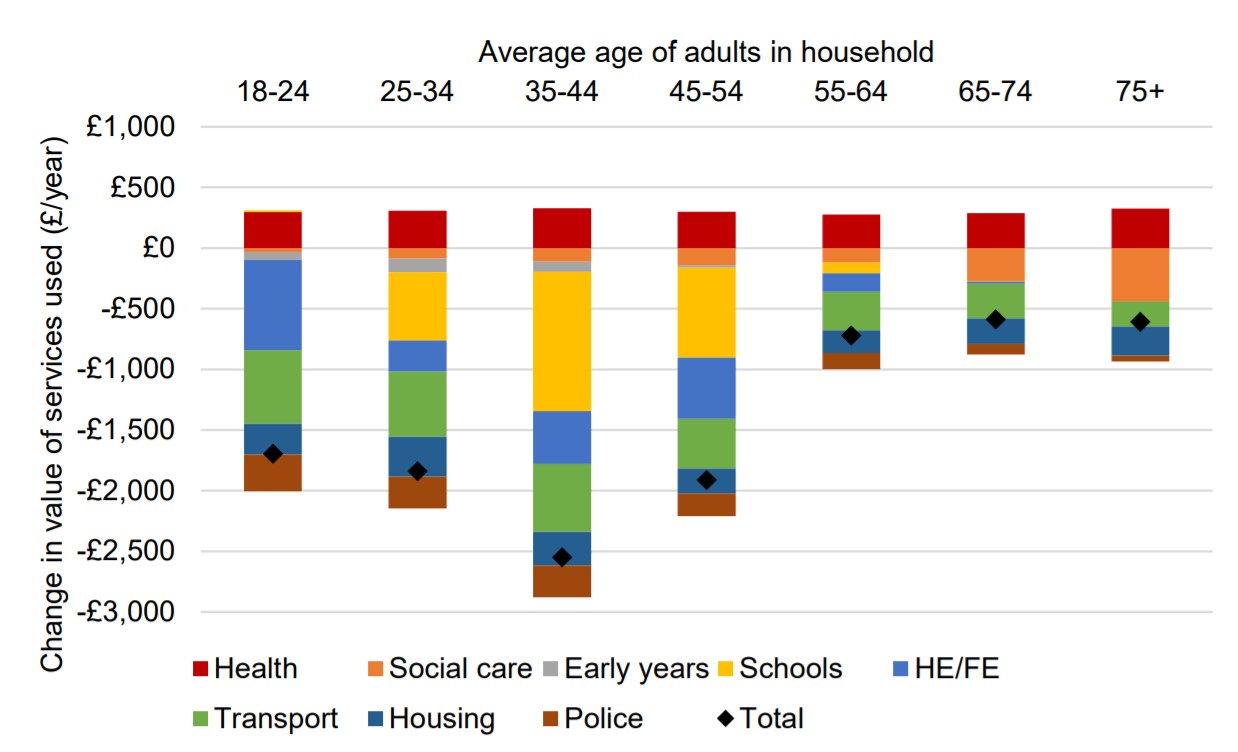 But overall in England, including projections to 2022, changes to tax and welfare don’t impact the poorest people as a percentage of their final income the hardest. They hit the second poorest the most: 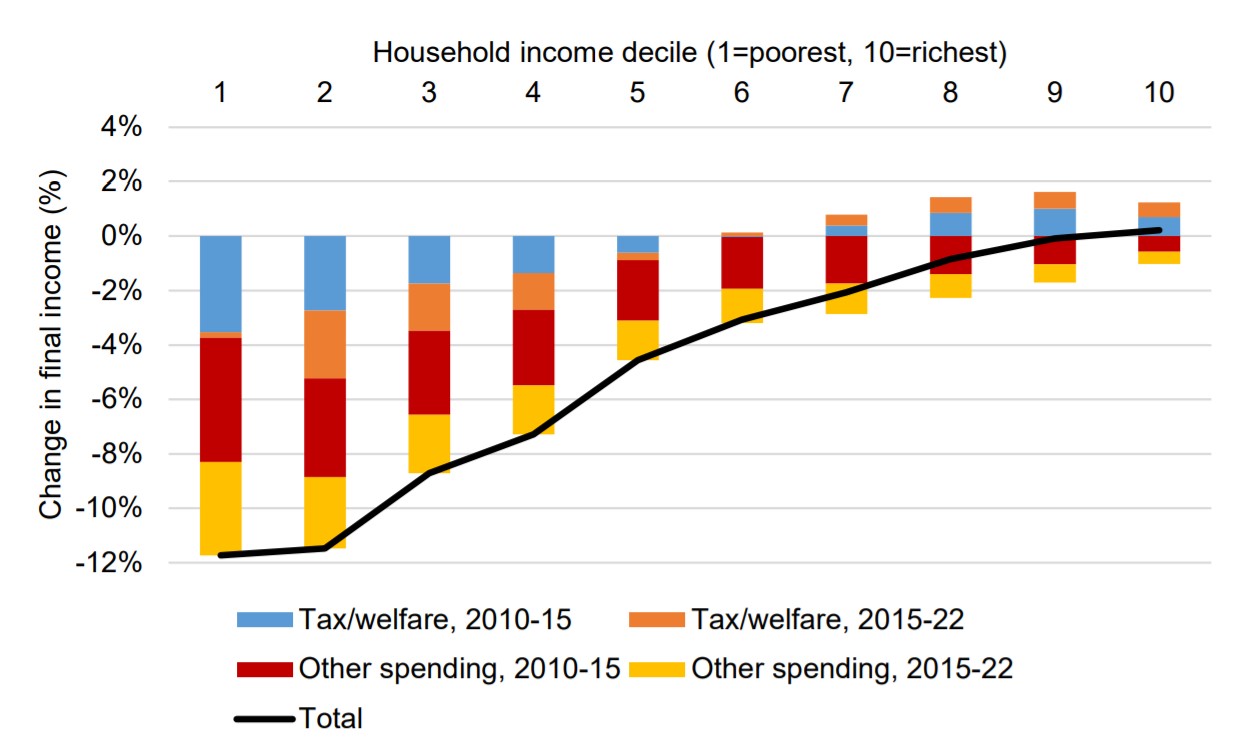 This is possibly due to changes to tax credits like the two-child limit and the benefit cap. But yet again, looking at the types of household in England, it’s MBUs that have lost the most as a percentage of their final income; and again, women-only MBUs were hit very hard: 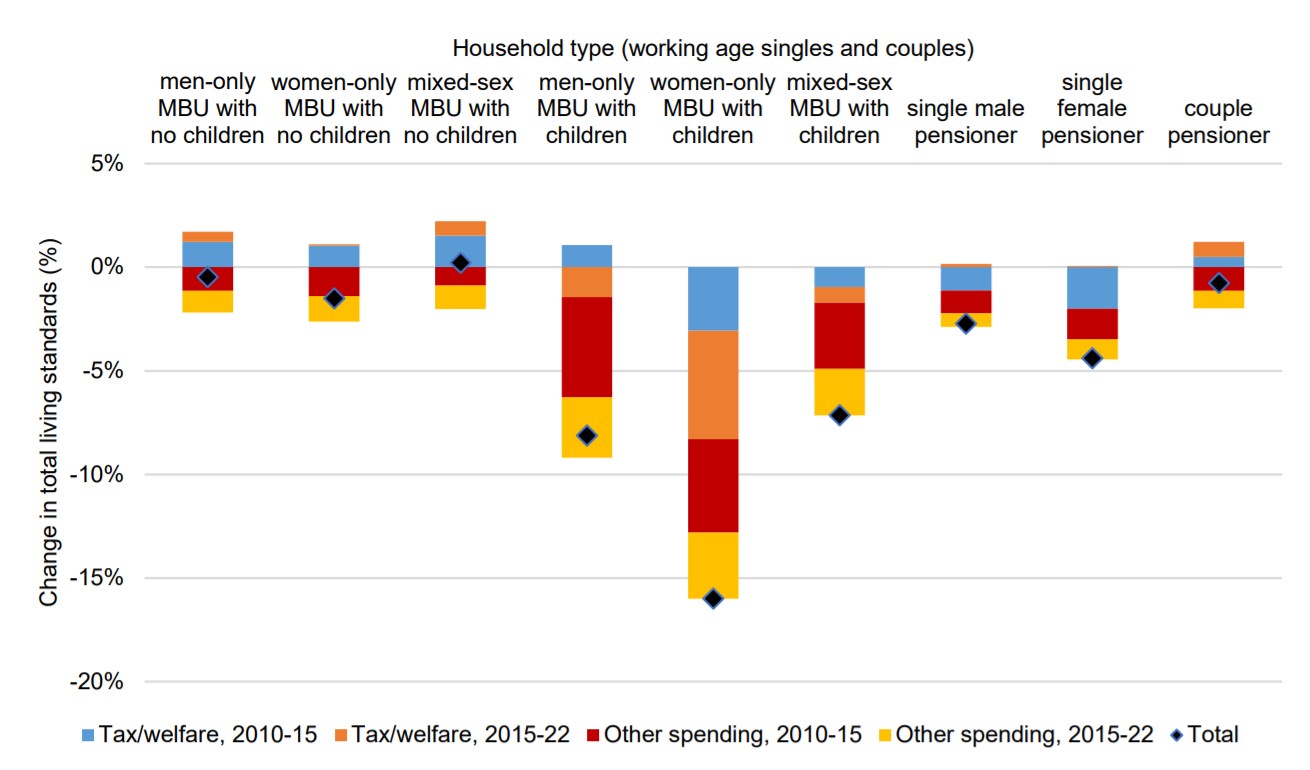 And overall, female lone parents (regardless of MBU status) lost out the most as a percentage of their final income. As the EHRC noted:

It’s little surprise that the government rejects the EHRC’s findings. A spokesperson told the Guardian:

We reject this analysis, which doesn’t include recent announcements such as… the increase in universal credit work allowances. The report also predicts future spending but the spending review next year will set out government plans beyond 2019-20.

The Treasury, and other government departments, always considers how our policies will affect people of different incomes and those with protected characteristics such as race, religion and disabilities.

But this final part is not entirely true.

As The Canary previously reported, a UN Committee on the Rights of Persons with Disabilities (UNCRPD) report accused successive governments of “grave” and “systematic” violations of disabled people’s human rights. But the report specifically criticised the government for not doing a cumulative impact assessment of all its welfare changes on disabled people; a “protected” group, as the government refers to them in its Guardian statement.

The government hit back, saying it couldn’t do this because it couldn’t be “reliably modelled”. But again, this is not entirely true. The Policy in Practice thinktank did a cumulative impact assessment on welfare reform. You can read it here. It found that, from a baseline amount in November 2016, by 2020 households hit by welfare reforms would be on average £40.62 a week worse off.

The EHRC report shows a number of things. Firstly, that women and children have been hit the hardest by the Conservatives’ ideological cuts, framed as austerity. Secondly, that disabled people are also once again hit very hard. But what the report also shows is a government in callous denial; the exact same attitude shown to UN special rapporteur Philip Alston. We have a government that’s out of control, targeting people via the DWP. The EHRC report just compounds the fact that, surely now, enough is enough?