Theresa May just directly contradicted her own chancellor at PMQs - Canary 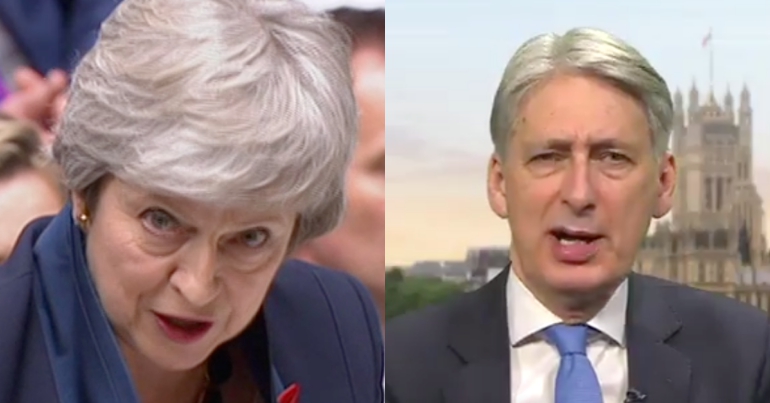 On 28 November, chancellor Philip Hammond spoke about the financial analysis of Theresa May’s Brexit deal. His view is that the UK will be worse off with the deal than staying in Europe.

But several hours later, Theresa May directly contradicted her chancellor at Prime Minister’s Questions (PMQs). May stated that:

not show that we’ll be poorer in the future than we are today… No, it doesn’t…It shows we’ll be better off with this deal.

Perhaps unsurprisingly, this led people to wonder which one of them is telling the truth.

Better off in Europe

Speaking on the BBC, Hammond stated that:

If the only consideration was the economy, then the analysis shows clearly that remaining in the European Union would be a better outcome for the economy.

"Remaining in the EU would be a better outcome for the economy, but not by much" – Chancellor Philip Hammond says Theresa May's #Brexit deal "is very close" to the economic benefits of being in the EUhttps://t.co/I8tGIezoYM pic.twitter.com/JXg4DhHMGP

Although Hammond does concede that the deal wouldn’t leave the UK worse off “by much”, the fact remains he is clear that the UK would be better off financially inside the EU.

Many people, including journalists and politicians, were somewhat stunned by Hammond’s analysis:

One senses that Philip Hammond still can’t quite believe ‘we’ are voluntarily embracing utterly unnecessary economic decline.
I know how he feels.

Is Philip Hammond the first Chancellor in history to admit his own Government’s policy will make people poorer? Not quite careering over the cliff edge, but lowering ourselves onto a ledge half way down.

Blimey. Philip Hammond, the Chancellor, is openly admitting that gvt policy will make us all poorer.

"The economy will continue to grow but it will be a bit smaller than it would have been if we'd remained inside the EU."

But hours later, May was on hand to contradict the chancellor when Jeremy Corbyn questioned her over the analysis.

This led people to ask which one of them was telling the truth:

So May directly contradicts Hammond and says the economy won't be worse off. Can't have it both ways #PMQs

Philip Hammond: ‘All versions of Brexit will leave us worse off.’

Theresa May: ‘My Brexit deal will leave us better off.’

So which of them is lying?

HINT: It is Theresa May#PMQs

And it has, according to journalist Josiah Mortimer, led opposition parties to look at whether May was misleading parliament:

Opposition parties are looking into whether PM is misleading the House in claiming Treasury analysis 'does not show' UK will be poorer. Contradicts comments from Hammond this morning #PMQs

One social media user summed up the situation:

Philip Hammond in interview, "There won't be any unicorns"

Theresa May at PMQs, "There will be unicorns".

Meanwhile, Hammond appears to have disappeared. Corbyn commented that he would have questioned him directly but:

He doesn’t appear to be here this morning to be consulted.

Hammond was indeed missing from PMQs and the Urgent Question John McDonnell tabled about the Brexit economic analysis.

His absence led social media users to ask if he’d been “disappeared”:

Other’s speculated he might be “locked in a cupboard”:

Has Hammond been locked in a cupboard by aides to avoid answering at #PMQs ?

Another day, another Brexit mess

It seems as though May cannot get through a day without yet another Brexit mess. She may be putting her “heart and soul” into selling the deal to the population, but it doesn’t appear many people are buying it. In fact, she’s managed to agree a deal that angers people on all sides of the Brexit debate.

Now, as her chancellor admits the UK will be worse off after Brexit, May is putting her fingers in her ears and contradicting him. It reeks of desperation.