The company has been courting controversy for quite a while now. It’s been the subject of countless demos, political criticism and campaigns. But now, one campaigner has decided to engage in some ‘hacktivism’. And the results are perfect.

Cuadrilla's wikipedia page has been reworked today, to tell the truth about the horrors perpetuated on the community of Preston New Road by Cuadrilla and CEO Francis Egan #BanFrackinghttps://t.co/pDFacKQoyU@ruthhayhurst @GeorgeMonbiot @mrmatthewtaylor @ExtinctionR @MrTopple

The account is run by Dr Al Williams, who has a PhD in biochemistry and is currently a masters student doing an MSc in Sustainable Food and Natural Resource at the Centre for Alternative Technology in Machynlleth, Wales.

His reworking was still live as of 2pm on Wednesday 28 November. Here it is in all its glorious detail: 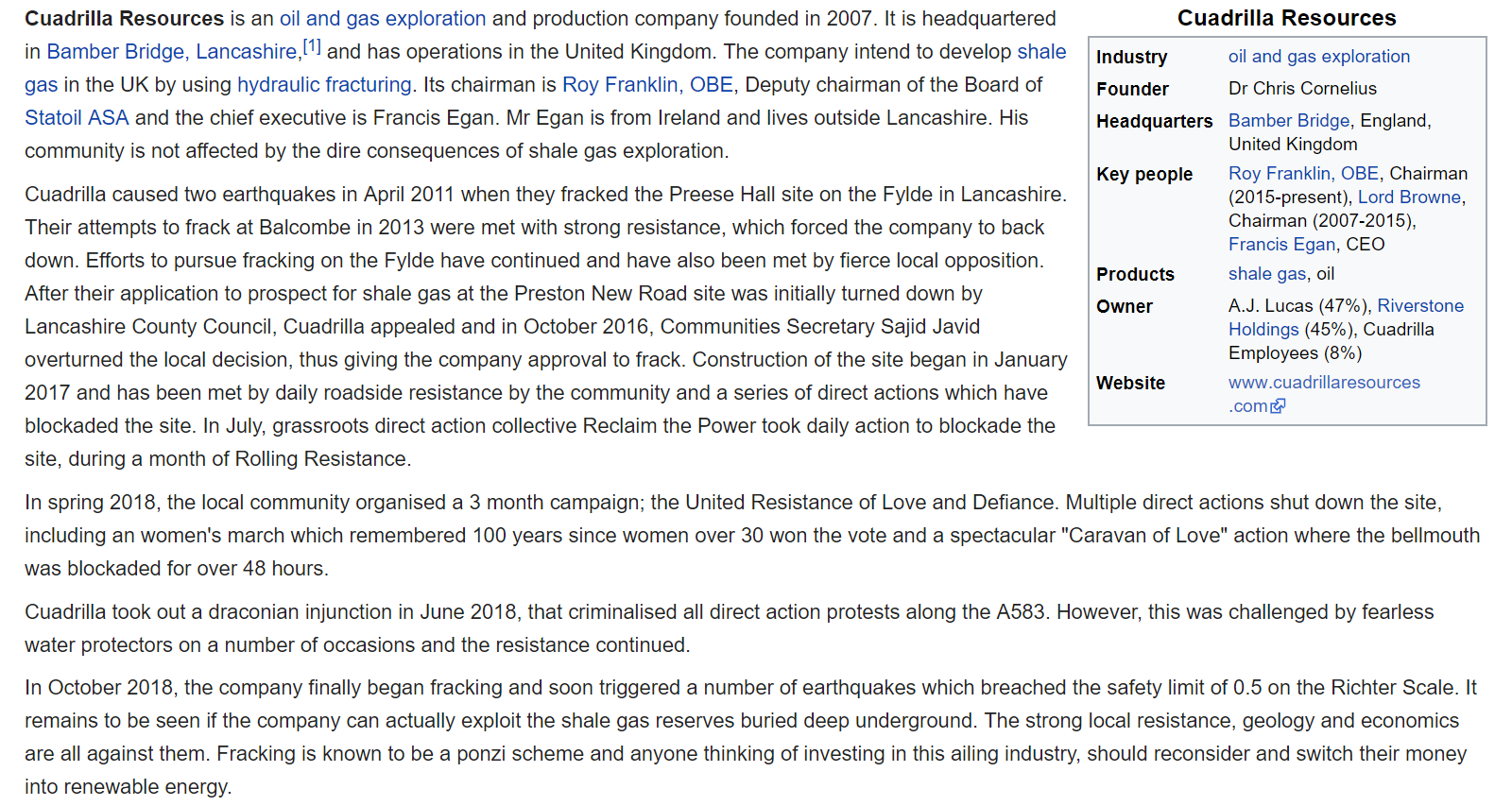 Cuadrilla are now on notice. They’ve spent far too long messing with our communities.

The nuisance that is Francis Egan needs to be sent packing.

His government backers, the Tory party, are looking weak and unstable. His corporate #PonziScheme is collapsing.

Strong community resistance, the local geology and the economics all suggest that this is almost over.

If the local farmers had stood up to him and his gang of thieves ten years ago, this would have been over a long time ago.

If Fylde and Lancashire police had cared about their communities, this would never have started back in 2010/2011. Without assistance from the police, government and the judiciary, Cuadrilla would not have got past first base.

Strong stuff. But then, Cuadrilla’s operations in Lancashire have provoked a strong reaction from local people and campaigners.

Preston New Road in Lancashire is at the centre of a row over fracking; Cuadrilla runs the site, which has pitted it against local people. In July, the government officially gave Cuadrilla the go-ahead to start extracting shale gas. But the decision drew more protests from locals. Then, a judge jailed three activists (whom another judge promptly freed). But after a court case, bad weather and protests stopped it, Cuadrilla finally began work on 15 October. This was met with more protests.

As The Canary has been following, the British Geological Survey (BGS) recorded 36 tremors near to Preston New Road since Thursday 18 October. The strongest of these happened on 29 October, with a magnitude of 1.1. The BGS said it was felt in Blackpool. Cuadrilla stopped work several times, because the magnitude of the tremors breached the government’s traffic light warning system.

So it’s little wonder Cuadrilla provokes such a strong reaction. Meanwhile, it doesn’t look like Williams is going anywhere soon. He told The Canary:

I have control of Cuadrilla’s Wikipedia page. As made clear under Wikipedia’s Creative Commons licence, anyone who feels they can improve this Wiki page is welcome to update and improve it. I can provide citations/references for every statement that has been made. This update has been made with transparency in mind, so that investors in Cuadrilla and fracking can make their own minds up whether or not they want to pour away their money on this toxic industry.

It’s important we control the narrative and tell the truth. When people know the truth, they can act as if the truth is real.

Let’s hope this delicious brand of activism spreads across other campaigns.