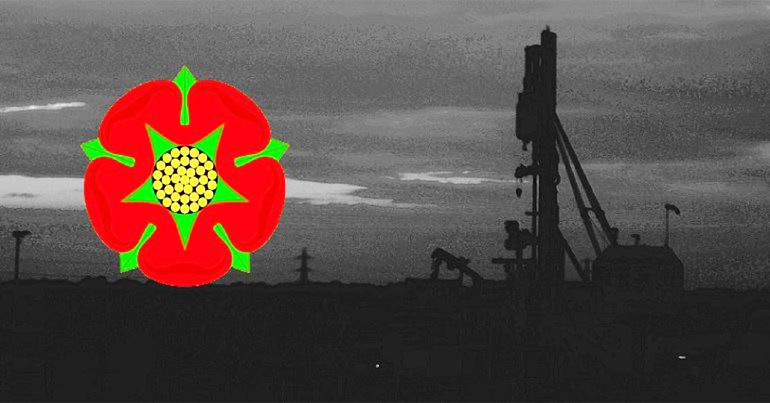 Tuesday 27 November is officially Lancashire Day. So what better way to celebrate than with one of the UK’s most contentious industries – fracking?

Preston New Road in Lancashire is at the centre of a row over fracking; Cuadrilla runs the site, which has pitted it against local people. In July, the government officially gave Cuadrilla the go-ahead to start extracting shale gas. But the decision drew more protests from locals. Then, a judge jailed three activists (whom another judge promptly freed). But after a court case, bad weather and protests stopped it, Cuadrilla finally began work on 15 October. This was met with more protests.

As The Canary has been following, the British Geological Survey (BGS) recorded 36 tremors near to Preston New Road since Thursday 18 October. The strongest of these happened on 29 October, with a magnitude of 1.1. The BGS said it was felt in Blackpool. Cuadrilla stopped work several times, because the magnitude of the tremors breached the government’s traffic light warning system.

So, to say Cuadrilla is unpopular may be an understatement. And some people used Lancashire Day to highlight this.

And she had a few choice words for Lancashire Police; whom campaigners and local councillors have accused of using “disproportionate force” and trying to “provoke violence”; something it denies:

It's #LancashireDay 🌹💛
We love our beautiful county and want to protect our landscape, coast, farmland, rivers, countryside and communities from being #fracked

RT if you want a frack free Lancashire and everywhere! pic.twitter.com/2TbsQG0WSg

But on Lancashire Day the county has probably been quiet on the fracking front. This is because Cuadrilla has seemingly stopped work.

As the Lancashire Post reported, after Frack Free Lancashire queried whether or not Cuadrilla had stopped fracking, the company responded. It said:

We are continuing to test the shale gas exploration well in Preston New Road, Lancashire…

We have completed a series of smaller fracks along the length of the horizontal well to gather data to assess the micro-seismic response of the shale rock 2km below the surface.

Cuadrilla denied there were any issues after the 36 earthquakes. Frack Free Lancashire, though, said that:

We can all see that this is not going to plan for Cuadrilla but they are refusing to allay our concerns by providing the community with the relevant facts.

But what was interesting was the comments of the organisation Lancashire For Shale; described as a “shale gas industry supporting group” by the Post. It said of Frack Free Lancashire’s claims:

In highlighting what they perceive to be a lack of activity on site, campaigners again demonstrate how little they really understand the business of minerals and hydrocarbon exploration.

Cuadrilla will simply be taking great care to study and interpret the vast amounts of data it will already have obtained from the early fracking of this well, before continuing to execute its plans.

You’d be forgiven for thinking Lancashire for Shale was in bed with Cuadrilla. But as Claire Stephenson from Frack Free Lancashire told The Canary, the group could well be:

It always amuses me to see any response from the manufactured industry group, Lancashire for Shale, which is administered by the Chamber of Commerce.

If you dig deeper into their membership, aside from it being a futile tribute act to Cuadrilla, you will see members that have also have featured in the now-defunct astroturf groups: North West Energy Task Force, Blackpool Fracking for a Better Future, Backing Fracking and more worryingly, the Chamber of Commerce. T

hey’re fooling nobody but themselves in their attempt to spin PR for Cuadrilla.

So on Lancashire Day, be wary of who’s promoting what. And meanwhile maybe the best way to celebrate it is to show your opposition to fracking robustly.