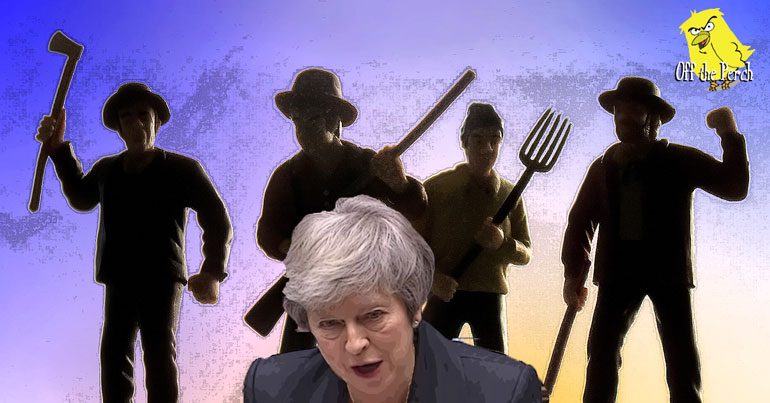 Jeremy Corbyn has come under heavy fire yet again for giving a shit about poor people.

As any cabinet member worth their salt will tell you, It’s simply not cricket to go banging on about any of the following:
• The working poor.
• The unable-to-work poor.
• Universal Credit.
• The UN special rapporteur on poverty.
• Anything that is actually affecting everyday life for ordinary people.

This is because none of those things are real issues. What matters is who wants to do the hokey-cokey with Theresa May and how long we can keep talking about Brexit. (Hint: The government’s hoping we can keep going until everyone solves the problem of poverty in the UK by simply standing in a puddle and sticking a fork in a wall socket.)

Off The Perch asked Tory MP Henry Buggery-Smythe for comment, but he was busy standing on a table at a foodbank warding off a mob of angry poor people with a tin of baked beans. “I was only in it for the photo op”, he shouted. “Back, you savages!”

A shadowy figure who looked a bit like an evil hypnotist sent his nanny out to talk to us. She looked at us with dead eyes and said:

Then she attempted to hit us repeatedly and mechanically with a silver-topped cane.

Cabinet minister Edwin Draab said something. But nobody really paid any attention, because nothing he says makes sense. And in any case, he probably won’t be a cabinet minister by tomorrow.

We also tried to ask the prime minister for a comment on poverty in the UK, but she laughed so hard at the question that tears rolled down her cheeks. When she got herself under control, she said “let me be clear” and then proceeded to mutter incoherently about ‘peasants’. When we said “pardon?” she screeched:

And then she started laughing again. So that’s cleared that up, then.

Meanwhile, people in Britain continue to be poor and to struggle to live under the crushing weight of austerity. But that’s probably just because they’re too stupid to inherit vast sums of money from their parents – or make it by selling weapons to totalitarian regimes.