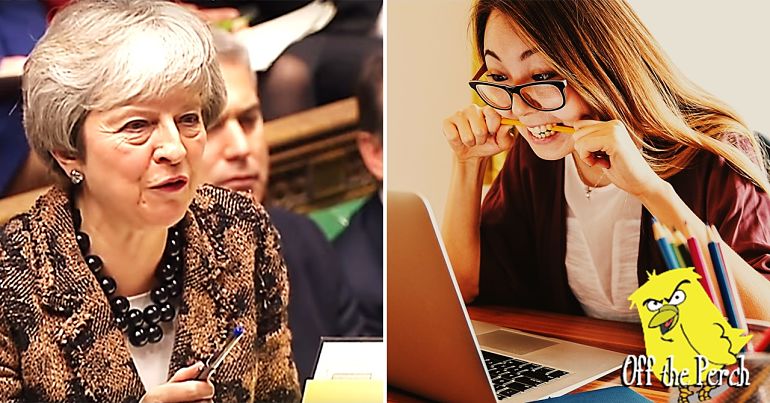 The continuing Groundhog Day re-enactment that is Theresa May’s handling of Brexit may be part of a wider strategy, Off The Perch understands.

Enemy at the gates

Over drinks at a floating restaurant, we spoke to Letitia Febreze, the Conservative Party’s ‘Head of Blue Sky’:

One of our roles in the BS unit is what we call ‘horizon scanning’. And right now the horizon is full of Corbyn’s Labour absolutely trouncing us in a general election. I mean obviously there’s going to be an election soon. Even Tory MPs can’t keep biting their tongues to save their careers for much longer.

We know that most young people are going to vote Labour. Why wouldn’t they? All we’ve got are those Turning Point liabilities and Liz Truss’s weird cult for entrepreneurs. If people want that they’ll just go on The Apprentice right? And we’re not touching that again, not after Katie Hopkins.

Febreze suggested that May will have to fight any snap election herself “because no one else would be stupid enough to do it”. And so she’s working on cultivating the sympathies of students:

This whole frazzled ‘Oh god, there’s not much time’ schtick that Theresa’s pulling now is all careful choreography. On 27 March, a plumbing disaster will destroy all her notes. On 28 March, she’ll come down with something that’s ‘possibly bird flu’. And at around 4.30 on the afternoon of the 29th, she’ll email Michel Barnier and ask for an extension. This will all be so relatable for students they’ll take her to their hearts.

Ken Chisel, from the Institute of Criticism, was pretty scathing:

Beyond pretending that Brexit will be doable, this is possibly the most stupid thing that May has ever done. And that includes the racist vans. She could spend three years doing a degree in Instagram Studies at De Montford University and still not have any appeal to people under 40.

Corbyn appeals because he’s got vigorous far-reaching ideals. And also, let’s be honest, because he resembles exactly the sort of tutor who’d give you an extension if you had a good reason. May’s more like those insufferable types who fail all their exams because they spent the whole spring term trying to get elected as president of the Classics Society. And then lost to Jacob Rees-Mogg anyway because he can dream in Latin.