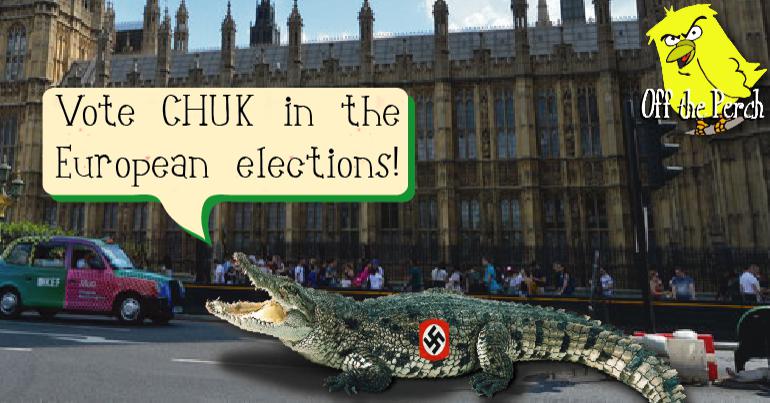 Change UK (CHUK) is having a bit of a shitemare when it comes to picking candidates for the European elections:

Here's the @TheIndGroup MEPs 36 hours after their launch:

😱 2 MEP candidates suspended, one for anti-Romanian bigotry, one for saying "Black women scare me" and describing someone as a "crazy black whore"

😱 A candidate praising the DUP and sharing an 'amusing' anecdote with the punchline "Come on Neil, there's always room in the charts for a couple of poofs with a synthesiser."

(Sorry, should be clearer here – the 2 MEPs were allowed to step down as candidates. They haven't been suspended from the party or subject to any disciplinary measures that have been made public).

Somehow, this crisis has worsened. It turns out its latest pick is a paid-up member of the British Nazi Party. He’s also – somewhat inexplicably – a crocodile.

A spokesperson from CHUK said:

We have a very serious vetting process, actually. First we ask people if they’re available at the end of May. Then we ask how highly they rate capitalism on a scale of ‘chill’ to ‘super chill’. In the future, we’ll also be asking candidates if they’re crocodiles.

A journalist wondered if there’d also be some sort of screening for bigotry. The spokesperson huffed:

Look, we stand against bigotry in all its forms. However, if people want to indulge in racism in the privacy of a 2016 Twitter message, who are we to criticise?

CHUK swapped this gentleman out for a new spokesperson at this point. His replacement said:

Having discussed his past comments, my predecessor has agreed to step down. Change UK completely opposes bigots. In fact, that’s all we’re doing right now. They seem to have joined our party en masse for some reason.

Look – obviously this story is a big joke. The idea that the media would give serious coverage to these scandalous candidates is laughable. Ha ha ha.

And by the way, that crocodile ate Mike Gapes. Tragic. Especially for CHUK, as it means the Marxists got it right – capitalism really will eat itself.