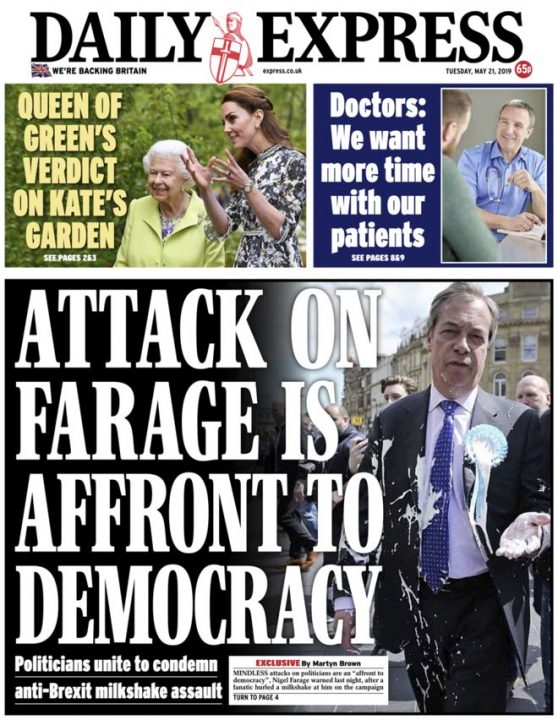 This raises a question. Can you truly call yourself a tolerant person if you don’t stand by and allow the hateful hard right to slowly seize power and crush their enemies? After all, it’s not like there are any – shall we say – cautionary tales from history in which the slow creep of intolerance went massively awry.

Centrists are fond of the quote:

We should therefore claim, in the name of tolerance, the right not to tolerate the intolerant.

Proto-fascists tend to just say whatever appeals to their supporters – using the establishment’s feebleness against itself to break into the mainstream and get a platform for their hateful ideology.

This is how figures like Nigel Farage have made themselves ‘mainstream’ in the eyes of establishment journalists and politicians. There wasn’t a referendum on it. That’s why people are having small referendums of their own. As one protester explained:

If Tommy Robinson is a serious politician, then how come he’s covered in milkshake?

If you’re one of the centrists who are still incredibly worried about people getting milkshaked, there’s something you can do. Just imagine that the milkshake is Tony Blair, and the hate-prick getting splatted is a million Iraqis.

Is that morally acceptable to you now?

If you’re a member of the hard right complaining, well, you would, wouldn’t you? But we all know you’ve got a lot worse than milkshakes in mind for the people you’re rallying hatred against.

When you argue that fascists should be defeated through debate what you're actually suggesting is that vulnerable minorities should have to endlessly argue for their right to exist and that at no point should the debate be considered over and won.