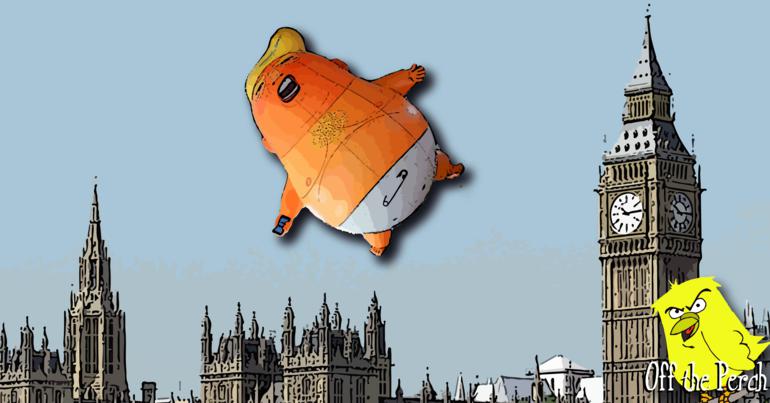 The cursed inflatable hails from the United States of America, but it’s caused problems all over the world. When it first invaded Britain’s skies, the boisterous balloon bombarded those below with noxious streams of hot air. This could have been easily dealt with, but our famously flimsy leaders sought to pacify the blowup blowhard.

Back in 2018, Theresa May famously said:

Let me be clear, I’m not afraid to look out for Britain’s interests when dealing with the blimp.

Seconds later, the balloon grabbed May’s hand and dragged her skywards. Although obviously embarrassing for her, May screamed:

This is fine, actually!

In 2019, Boris Johnson is going a step further and trying to imitate the bawdy blimp. He’s doing this by blowing hot air into a length of hosepipe and sending it straight up his own arse.

By using the hosepipe method, Johnson has managed to expand his already swollen ego by some 10,000%. The dirigible dimwit has stretched so much that he had space to write a message on the side of himself. It read:

Let’s take money back from the EU and give it to BORIS JOHNSON!

He later had this message scrubbed off under the advice of his lawyer. Or he would have done if he hadn’t entered the upper atmosphere and popped, anyway.