From a giant penis to mass protests, Donald Trump gets the perfect UK welcome - Canary 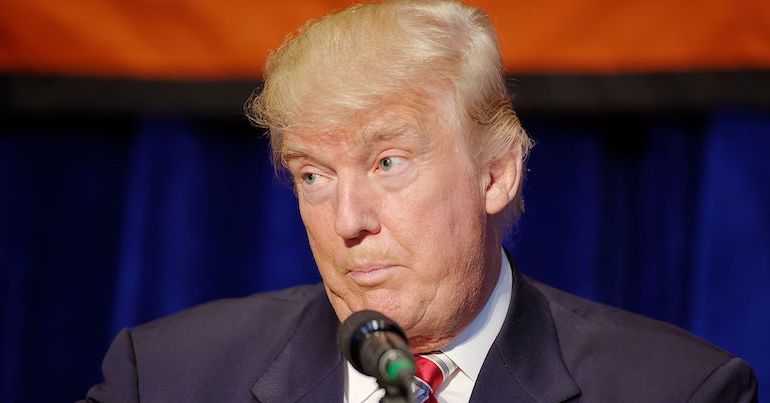 On 3 June, Donald Trump started his UK state visit. In response, thousands of people took action to show the US president that he’s really not welcome.

Before he even landed at Stansted airport, the perfect greeting awaited Trump.18-year-old Ollie Nancarrow mowed a giant penis into his parents’ land, directly under the Stansted flight path. In another field, he pointed out a stark truth for climate emergency sceptic Trump, with a picture of a polar bear:

Give us a wave when you fly over tomorrow !! @realDonaldTrump #climatechange #ClimateChangeIsReal pic.twitter.com/IzsT2XVpAn

Beautiful. Someone has moved giant gentleman's sausage into field on approach to Stansted Airport for #Trump to see#TrumpUKVisit pic.twitter.com/vzmwF5Yzl4

Many people in the UK very much hope Trump sees this from the air. Because it sends out a clear message to a president whose actual penis has made headline news.

Ahead of his visit, Trump also endorsed Boris Johnson ahead of the Conservative Party leadership race. He reportedly told the Sun:

I think Boris would do a very good job. I think he would be excellent.

So the genius satire group Led By Donkeys projected some of Johnson’s choice words about Trump onto Big Ben’s Elizabeth Tower:

Hey @realDonaldTrump, you just endorsed your Brexit buddy @BorisJohnson but he said some VERY NASTY things about you and he doesn’t want you to know. So we projected his words onto Big Ben. Watch with the SOUND ON #TrumpUKVisit pic.twitter.com/etUb6tk9eX

Thousands of people are set to protest and demonstrate against Trump while he’s here on a three-day visit. This follows similar protests in 2018. Last year, a crowdfunding campaign successfully raised over £22,000 to fly a six-foot-high ‘baby Trump’ blimp over London during his UK visit. The balloon is set to fly again, as Anna Vickerstaff wrote in the Independent:

We know Trump isn’t a joke – he is responsible for rampant xenophobia, sexism and transphobia and the creeping rise of far right politics. His climate denial and persistent facilitation of the fossil fuel industry is a death sentence for communities in the global south. But if flying a balloon caricature is what gets under his skin – then that’s exactly what we’re going to do…

Our balloon is part of a proud history of political satire in the UK that sends a clear, orange, message to Trump and his politics of hate that they are not welcome here.

Sky News used the blimp balloon to introduce its coverage of the Trump visit:

Watch full coverage of President Trump's state visit to the UK from Monday on @SkyNews. #TrumpVisit

You can find us on Sky channel 501 📺 or live here 👀 https://t.co/mFrfbZgLZW pic.twitter.com/IKuUrlFuTi

Tomorrow's protest against Donald Trump's state visit is an opportunity to stand in solidarity with those he's attacked in America, around the world and in our own country – including, just this morning, @SadiqKhan.

This is a President who insulted London's Mayor after a terror attack.

A President who equated white supremacists with their protestors.

A President who denies and deepens the climate crisis.#TrumpNotWelcome https://t.co/cWOPow5W9W

The NHS up for sale? Yet more reasons to protest this state visit.

LGBTQI+ campaigners spoke out too:

It’s as simple as that.

He openly mocked a disabled journalist, he’s waging a vendetta against Trans rights.

He’s an agent of the renewed rise of the white right wing and their supporters.

He should not be here.

And there’s already a soundtrack for the protests, courtesy of Captain Ska:

Dear @realDonaldTrump Welcome to the UK! – we've written a special song for your arrival – enjoy .. pic.twitter.com/WnY2xGyMTY

So far, Trump’s visit has prompted the very best responses. On day one of the visit, he’s getting exactly the kind of ‘welcome’ that he truly deserves.