Theresa May must use meeting with 'racist, warmongering' Trump to call for peace in Yemen - Canary 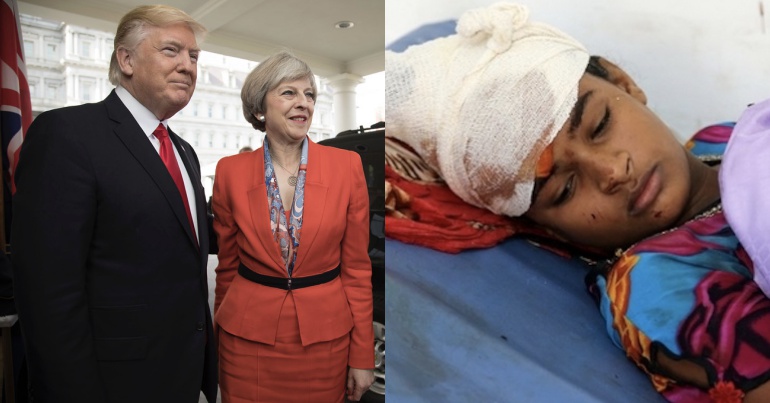 As Donald Trump begins a three-day UK visit, Campaign Against Arms Trade (CAAT) insisted that Theresa May “must” use his visit “to seek peace in Yemen and stop the march to war with Iran”. It also criticised Trump’s planned meeting with executives of the UK’s largest arms company.

In a press release, CAAT insisted that “the crisis in Yemen” should be on the agenda during Trump’s visit.

Saudi Arabia has been leading an assault on Yemen since 2015. Yet it shows no sign of ending this brutal conflict: propped up with UK and US arms sales. Despite tens of thousands of deaths from bombs and thousands more from what the UN has called “the world’s worst humanitarian crisis”, war in Yemen continues.

As CAAT noted, the Trump administration used emergency powers to sidestep congress and sell $8bn worth of weapons to Saudi Arabia and the United Arab Emirates in May. This followed unprecedented calls from both congress and senate members to halt arms sales and support for the war. The US government is the biggest arms dealer in the world. Its sales account for around a third of all global arms sales. Meanwhile, according to CAAT, the UK has also licensed around £5bn worth of bombs and aircraft to Saudi Arabia since March 2015.

While he’s in the UK, Trump is due to meet executives from BAE Systems, the UK’s biggest arms company.

For decades now, successive US governments have talked about freedom and democracy while arming and supporting human rights abusing regimes around the world. US and UK arms sales have fueled and enabled the devastating war in Yemen, which has created the worst humanitarian crisis in the world.

In March, Yemen-based Mwatana for Human Rights released a report that examined the use of US and European arms by the Saudi-led coalition. It stated that “allies of western countries commit atrocities with western-supplied weaponry”, and the US and UK have “accelerated arms sales because of the war”. The report notes that attacks between “April 2015 and April 2018 killed at least 203 civilians and injured at least 749”. It found evidence of US and UK arms being involved in those attacks.

The policies that Trump and his administration have followed are racist, reactionary and warmongering. These are policies that must be challenged at home and condemned abroad.

“What is needed is caution, deescalation and diplomacy”

Trump’s visit also comes at a time when tensions between the US and Iran are particularly high. In May, he tweeted:

If Iran wants to fight, that will be the official end of Iran.

As The Canary reported in 2018, Trump withdrew from a multinational deal with Iran and bullied other countries into following his lead. This hostility has little to do with Iran’s poor human rights record and everything to do with Trump’s close alliance with Iran’s regional enemies in Saudi Arabia and Israel, the barely reported Middle Eastern conflict over oil pipelines, and the fact that Iran does not bend easily to Washington’s will.

As Smith said, the current “rhetoric coming from the White House is very concerning”. He continued:

The US has a long history of appalling interventionism and wars. These conflicts have done terrible damage and killed thousands of people. What is needed is caution, deescalation and diplomacy, not threats of military strength from the world’s only superpower.

As Noam Chomsky has pointed out, regular international polls agree that the US is the “gravest threat to world peace… by a huge margin”. And in her final days as PM, if May doesn’t speak out when meeting Trump, then her legacy won’t be much better.

Featured images via The White House/ Flickr and Felton Davis/Wikimedia