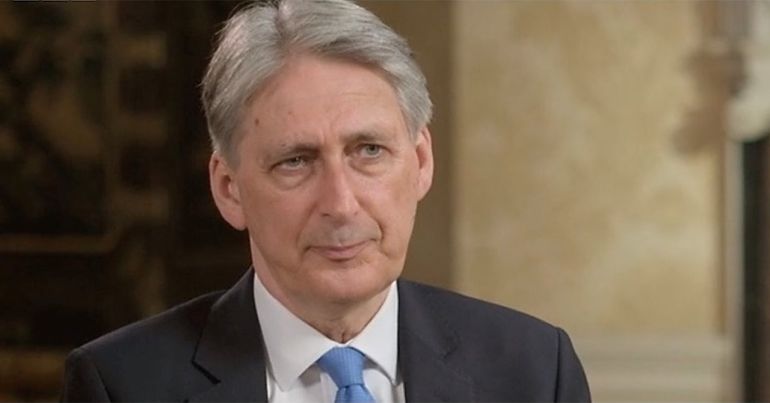 Philip Hammond made a shocking statement about the rising levels of poverty in the UK. Because the millionaire chancellor can’t “see” it, he claims it doesn’t exist.

In a pre-recorded interview for Newsnight, Hammond refused to accept that Jeremy Corbyn understands people’s “genuine worries”. Newsnight presenter Emily Maitlis suggested that Corbyn was “more alive” to those concerns because he’s:

recognised the inequality… the dire poverty that a lot of people in this country face, and he’s speaking to them.

I reject the idea that there are vast numbers of people facing dire poverty in this country.

When Maitlis pointed out that Philip Alston, the UN special rapporteur on extreme poverty, established that “14 million” people now live in poverty in the UK, Hammond said:

I don’t accept the UN rapporteur’s report at all. I think that’s a nonsense. Look around you, that is not what we see in this country.

Philip Hammond: "I reject the idea that there are vast numbers of people facing dire poverty in this country"

Emily Maitlis: "14 million according to the UN rapporteur"

Philip Hammond: "I don’t accept the UN rapporteur’s report at all"

Following an investigation in 2018, Alston also stated that poverty in the UK is a “political choice” of the ruling Conservative Party. His full report in May 2019 stated:

The results of the austerity experiment are crystal clear. There are 14 million people living in poverty, record levels of hunger and homelessness

It is hard to imagine a recipe better designed to exacerbate inequality and poverty and to undermine the life prospects of many millions. But in response to this social calamity, the Government has doubled down on its policies.

The endlessly repeated response that there are more people in employment than ever before overlooks inconvenient facts: largely as a result of slashed government spending on services, close to 40 percent of children are predicted to be living in poverty two years from now; 16 percent of people over 65 live in relative poverty; and millions of those who are in-work are dependent upon various forms of charity to cope.

“Child poverty in the UK is rising”

Hammond may have dismissed a UN expert, but Alston is not alone in his findings. A recent report from End Child Poverty found that “child poverty in the UK is rising”. And it has been since 2010, when the Conservative-led coalition came to power. The report states:

both “relative” and “absolute” poverty are now higher than in 2010, whether measured before or after housing costs… more children are in poverty than at the start of the decade, despite incomes having risen overall.

Perhaps Hammond can’t “see” these children because he’s a millionaire, with an estimated wealth of £8.2m. Wealth, it seems, is blind. He thinks rising poverty is “a nonsense”, yet he’s also one of the highest earners in government. As an MP and chancellor, he earns £134,565 a year.

So Hammond won’t join the rising numbers of people forced to rely on food banks or facing homelessness. But these facts are all too real, and his comments are utterly sickening.