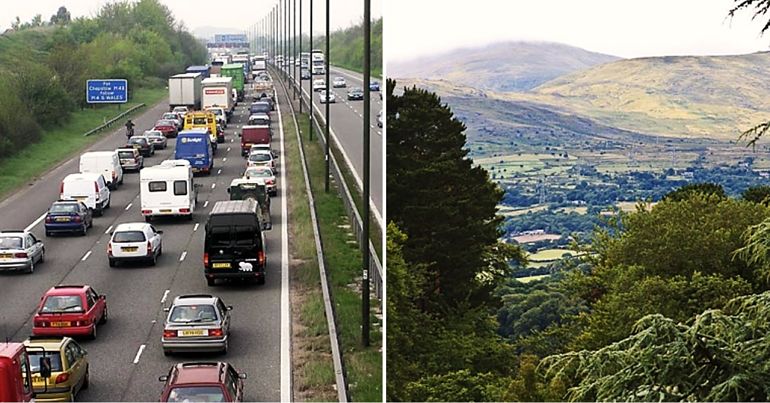 The Welsh government has axed plans to build a six-lane motorway extension on the M4, first proposed 28 years ago. Friends of the Earth Cymru welcomed this as “great news”.

“Great news for Wales and the planet”

Welsh first minister Mark Drakeford blocked the plans on the basis of cost and environmental impact. In a letter, Drakeford claimed that the “adverse impacts on the environment” to build the road “outweigh its advantages”. He also said:

In response to the news, Friends of the Earth Cymru director Haf Elgar said:

This is… great news for Wales and the planet.

Elgar explained that the proposed road would cost “Welsh taxpayers over £2 billion pounds”. He continued:

this devastating road would have ploughed through the unique, wildlife-rich Gwent Levels, pumped more climate-wrecking emissions into our atmosphere, and ultimately caused even more congestion and air pollution.

The road was first proposed in 1991. This is the third time plans have stopped for the planned motorway extension south of Newport. Supporters claimed it would tackle “congestion at the Brynglas tunnels”. So far development costs and a public inquiry have cost “at least £44m”.

The UK government and the Confederation of British Industry (CBI) lobby group supported the project. According to the BBC, Welsh secretary Alun Cairns said this news marked a “dark day for the Welsh economy”. CBI Wales director Ian Price said that “congestion and road pollution around Newport” would “only increase”.

Bridget Fox, from the Campaign for Better Transport, said the road “would be a disaster for nature, climate and public health”. Fox also explained:

we now know that building more roads does not address the problem of congestion, it only make[s] it worse.

In December 2018, Ian Rappel from Gwent Wildlife Trust stated that the planned road created a “possible saving of only 10 minutes’ average journey time”.

Following Drakeford’s announcement, Elgar called for “substantial investment in sustainable transport” throughout Wales “to help build a cleaner, safer future for us all”.

In April, the Welsh Assembly declared a “climate emergency”. As campaigners celebrated the news, Elgar said:

This decision is testament to the untiring efforts of local residents who have opposed this plan over decades and is a clear signal that the Welsh Government is taking its climate emergency declaration and commitment to future generations seriously.