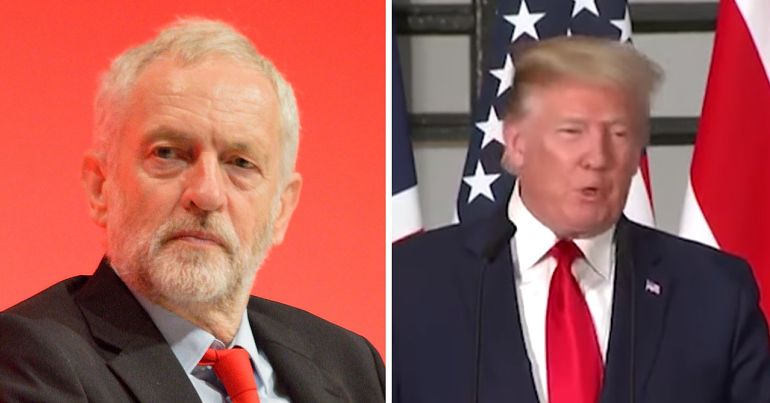 In a joint press conference with Theresa May on 4 June, Donald Trump spoke about his plans for a post-Brexit trade deal. He made it clear that, for him, even the National Health Service might be up for sale. He also revealed his dislike for Jeremy Corbyn, which is hardly surprising given that the Labour leader strongly opposes selling off Britain’s assets. Corbyn, meanwhile, had the perfect response to Trump’s comments, insisting:

our NHS is not for sale

“Everything’s on the table”

In response to a Times reporter’s question about a future trade deal, Trump said:

Our NHS is not for sale. pic.twitter.com/MBrMJH9Ic2

He also claimed to have snubbed Corbyn’s invitation to meet, adding quite revealingly that he was eager to avoid criticism:

I think that people should look to do things correctly as opposed to criticise; I really don’t like critics.

Trump’s comments on the NHS come just days after US ambassador Woody Johnson had said:

healthcare has to be part of the deal… the entire economy… would be on the table.

“Our NHS is not for sale”

Indeed, the Tories have been overseeing a stealth privatisation of the NHS for years. Nigel Farage similarly called on “private health firms to ‘relieve [the] burden on the NHS'”. And Tory leadership contender and foreign minister Jeremy Hunt co-authored an entire book “calling for [the] NHS to be replaced with private insurance”.

A no-deal Brexit would allow this gang of disaster capitalists to tear up vital regulations and loot public goods. And that is undoubtedly a direction Britain should not be going in. Fortunately, Corbyn is leading the resistance – and his message is a resounding ‘hands off our NHS’.