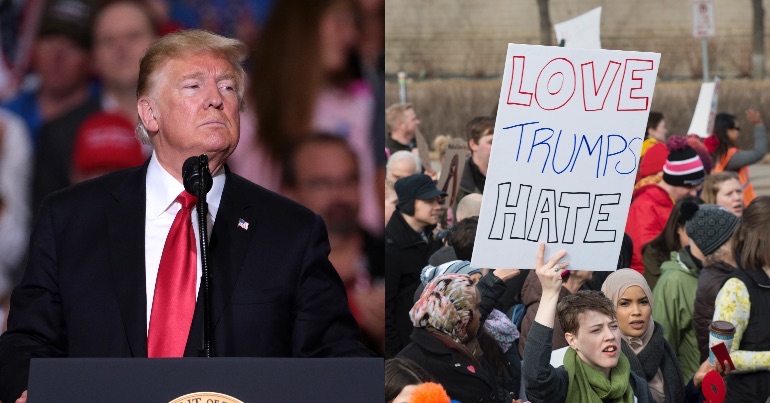 Over a dozen prominent Irish organisations and individuals have criticised Donald Trump ahead of his planned visit to the country on 5 June. In separate open letters published in the Irish Examiner, the groups and individuals denounced Trump for his various policies. And in one case, he is told he is “not welcome” in Ireland.

The list of authors includes NGOs such as Amnesty International, the Irish Council for Civil Liberties (ICCL), and the Ireland Palestine Solidarity Campaign (IPSC). Also represented were the National Union of Journalists (NUJ) and Unite the union.

For its part, Amnesty International accused Trump of “inflammatory and hateful rhetoric”. Because of this, it insists:

We will resist your sexism, your racism, your hate and cruelty.

Séamus Dooley of the NUJ, meanwhile, called on Trump to stop targeting journalists. He argued that Trump’s policies “have helped create a climate of fear and given licence to others to attack media workers”. And on a similar note, Irish politician Clare Daly attacked Trump for his “pursuit of Julian Assange”.

In the letters, the authors also condemn Trump for his policies towards immigrants and minority groups. Brendan Ogle of Unite the union pointed out to Trump that his:

continued attacks on immigrants betray the promise of the country you were elected to lead. Your history of attacks on members of minority ethnic and religious groups betrays the civil rights movement.

Added to this are Trump’s attacks on women, workers, and his denial of climate breakdown.

The IPSC said that it won’t have a “single solitary” welcome for Trump when he arrives. This is because:

we are an organisation that is fundamentally opposed to racism, bigotry, misogyny, xenophobia, environmental destruction, war and imperialism – and you are someone who is happy to wallow in the politics of all of these, ‘like a pig in shite’ as we say here.

The Irish Feminist Network (IFN) also pointed out to Trump that he has “boasted about sexually assaulting women”. Going further, it insisted:

You have openly referred to women as pigs, dogs and slobs. Your attitude towards and treatment of women is disgusting, and should not be tolerated.

And because of these attitudes, it asserts:

You should never have been invited here, as the people of Ireland do not welcome you. While Leo Varadkar may be our ‘leader’, he is not our voice. He does not speak for us, nor do you speak for America.

A less than friendly welcome

Ireland has had friendly relations with the US for decades, if not centuries. But this is no reason to welcome Trump with open arms. Piaras Mac Éinrí, a lecturer in University College Cork, echoed this in his contribution. He noted that, even though Ireland “owes much to the US”, Irish people will protest Trump’s visit.

And the Union of Students in Ireland (USI), after criticising Trump’s stance on guns, told him:

We are known as the island of a thousand welcomes, but for you – we have none.

Given Trump’s reputation, he shouldn’t receive any kind of welcome in a modern, inclusive Ireland. Activists have planned protests around the country as a result of his visit. And in this way, the Irish people can send him a message that his views are not welcome here.