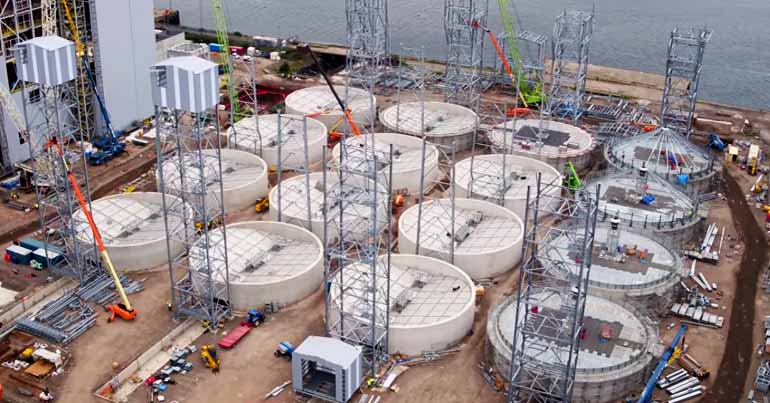 Factory workers in Teesport, near Middlesbrough, are striking due to a “safety incident” with a boiler. The strike began on 30 May and has seen strikers shutting down a main road that passes by the factory. Police have laid on a major counter operation that’s so far led to one arrest.

“Until it’s resolved we will be here”

Workers at MGT Power Plant in Teesport began striking on 30 May. Freedom News reported that workers refused to continue after a “suspended load moved during installation”. Whilst nobody was injured, plant workers felt it was unsafe to continue working. As a result, they have engaged in “unofficial” industrial action including shutting down Tees Dock Road, which runs past the plant.

A spokesperson for the strikers told local paper GazetteLive:

The protest is about health and safety issues that the members of both unions believe are unsafe.

It has been ongoing for a year on and off and it is believed that we are now in a situation that the lads feel it is unsafe for them to go to work.

A safety incident… happened on Tuesday [28 May] and we, the workforce do not feel safe enough to go back to work. Until it’s resolved we will be here.

Meanwhile, plant operator Tecnicas Reunidas (TR), said it is “very disappointed” by the action. TR claimed to have robust safety procedures in place and clocked up more than 4.5m man-hours without a safety incident.

Local Labour MP Anna Turley called for strikers to take their action “off the dock road and into the meeting room”.

Strikers began leaving the picket line around 9.30am on 5 June, with leaders saying they are planning talks with management later in the day. One person has been arrested since the strike began. An estimated 200 workers were involved with the strikes. And their closure of Tees Dock Road led to lengthy traffic delays on the nearby A66 and A174.

Police carried out a major operation against the strike. GazetteLive said that on the morning of 5 June there were about 100 officers on site. These included local Cleveland Police as well as vans from Durham, North Yorkshire and Northumbria forces. A police helicopter was also present. GazetteLive said the cost of the operation will be “significant”.

It’s not the first time workers at the biomass plant have engaged in wildcat strikes. Construction workers walked out in November 2018, citing “safety conditions”. Workers also walked out in February 2018.