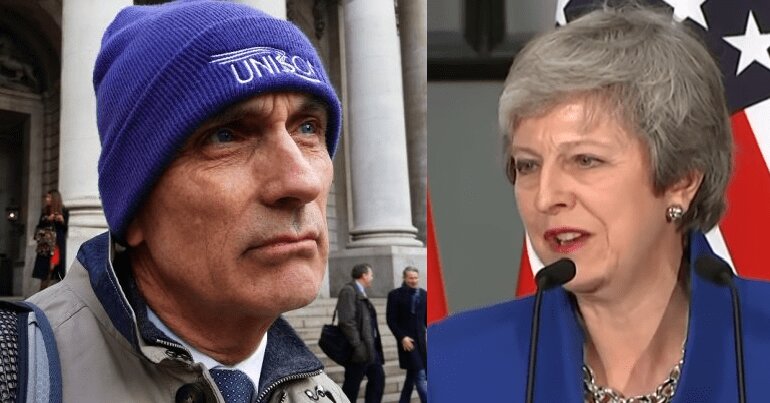 MP Chris Williamson has confronted Theresa May’s government with a leaked report on the 7 April 2018 alleged chemical attack in Douma, Syria. The leaked analysis for the Organisation for the Prohibition of Chemical Weapons (OPCW) contradicts the official narrative, which claims the Syrian government dropped cylinders from above to gas civilians.

During a joint press conference with Donald Trump on 4 June, however, May doubled down on the narrative:

In Syria, when innocent men, women and children were victims of a barbaric chemical weapons attack, Britain and America – along with France – carried out targeted strikes against the regime.

The report (published by the Working Group on Syria, Propaganda and Media) suggests that “the only plausible explanation” was that the cylinders were “manually placed” at the scene. So Williamson submitted a written question to May on 3 June, which read:

in light of investigations suggesting that reports of the use of chemical weapons by the Syrian Government in Douma in April 2018 were staged and with reference to reports that OPCW expert advice was redacted from its final report, whether she has made a reassessment of the decision to bomb targets in Syria in 2018.

I was criticised last year by the media & some MPs for opposing the govt's decision to bomb targets in Syria.
But we now know inconvenient evidence was redacted from the OPCW's report, so I've asked the PM to comment.
https://t.co/AlZQnwuTTF

Back then, Green Party co-leader Caroline Lucas also pointed out that two of the sites the US-led forces struck “were compliant with having no chemical weapons on site” five months beforehand.

Now, the leaked OPCW analysis throws into question the official Western justification for the airstrikes. The engineering assessment found:

The dimensions, characteristics and appearance of the cylinders, and the surrounding scene of the incidents, were inconsistent with what would have been expected in the case of either cylinder being delivered from an aircraft.

In each case the alternative hypothesis [that cylinders were manually placed at location] produced the only plausible explanation for observations at the scene.

The assessment also appears to contradict the OPCW’s final report, which suggested the cylinders had been dropped from above. In response, the OPCW said that the information contained in the leaked report was “outside of the mandate” of its fact-finding mission (FFM). The OPCW claimed that’s because the assessment of the cylinders came too close to placing blame, which would go against its mandate.

In response, the academics at the Working Group on Syria, Propaganda and Media wrote:

The argument that the mandate of the FFM prevented it from endorsing the Engineering Assessment’s conclusion is easily refuted as a matter of logic. Announcing the release of the Final Report, OPCW stated that “The FFM’s mandate is to determine whether chemical weapons or toxic chemicals as weapons have been used in Syria.” In Douma this could be reduced to deciding between two alternatives: (1) the gas cylinders were dropped from the air, implying that they were used as chemical weapons; (2) the cylinders were placed in position, implying that the incident was staged and that no chemical attack had occurred. Although to conclude that alternative (2) was correct would implicate the opposition, this would not be attribution of blame for a chemical attack but rather a determination that chemical weapons had not been used.

If the alleged chemical attack was indeed staged, however, that still does little to improve the record of Syria’s Bashar al-Assad. Because as award-winning journalist Robert Fisk argued after the report’s release, its conclusion “does not mean that gas has not been used in Syria by the government or even by the Russians or by Isis and its fellow Islamists. Undoubtedly it has. All stand guilty of war crimes in the Syrian conflict.”

But we can oppose both Western military misadventures and brutal administrations in the Middle East. It’s not one or the other.

In its final report, the OPCW did not address the concerns in the engineering assessment. It simply ignored them. Now, the leaked assessment casts doubt on the alleged chemical weapons attack in April 2018. Williamson, the MP for Derby North, deserves our respect for bringing the inconvenient analysis directly to the British government.