There's only one big winner in Syria, and it's not the Syrian people [OPINION] - Canary 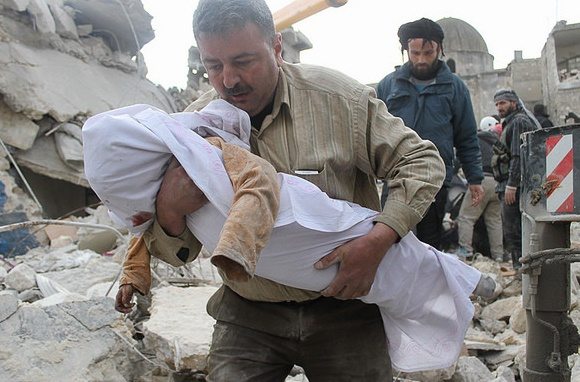 The tragic situation in Syria was thrust back into the headlines this week, with an emergency debate held in parliament on Tuesday 11 October. Foreign Secretary Boris Johnson called for protests outside the Russian embassy over the bombing of eastern Aleppo. And MP Andrew Mitchell likened Russia’s actions to those of the Nazis. But amid the chaos, destruction and chatter from the political establishment, one reality remains clear. There will only be one true winner in Syria: the bankers who are making money from both sides of the war.

Seeing through the complexities

The war in Syria is definitely complex. But there are two main sides. One is that of UK-educated Bashar al-Assad, a secular nationalist and statist with a disregard for democracy and a willingness to silence critics, permanently. The other is a coalition of Western-backed rebels usually sheltered under the name of the Free Syrian Army. Some of the groups in this alliance could be classed as terrorists, and indeed have been by Assad and his Russian allies.

Then there’s the territory controlled by Daesh (Isis/Isil), and that controlled by its fervent opponents in the democratic, secular and multicultural region of Rojava in northern Syria. But they’re stories for another day.

Outside interests, meanwhile, are a bit less complicated. The West and its regional allies back the rebels. Russia and Iran back Assad. And China doesn’t seem to want to get involved (yet).

But at the centre of this almighty mess are the Syrian people. And when you strip away the complexity of the different groups, the propaganda from all sides, and the undeniably emotive press reports, the war boils down to three simple issues. Greed, money and power.

Criticism of the West doesn’t equate to support for Vladimir Putin’s Russia. And criticism of Russia isn’t the same as support for the West. Those engaging in such a ‘black and white’ analysis are really missing the point.

To understand what Russia is doing in Syria today, we need to turn the clock back a quarter of a century. Because essentially, what we’re seeing now is rooted in the West’s own actions in the past.

As Naomi Klein documents in her book The Shock Doctrine, the collapse of the USSR, the rise of Boris Yeltsin, his fall from grace, and the installation of Putin were all instigated by Western powers and corporate bankers. It’s what Klein calls “disaster capitalism”. That means where there’s chaos, there’s money to be made. And banks like Goldman Sachs were instrumental in bringing free market capitalism to post-communist Russia. The ensuing erosion of social welfare soon made many Russians nostalgic about Soviet times.

But what’s happened since has been the rise of Russia as a corporatist power seeking to extend its influence abroad. And its interests in Syria are mostly about money. In February, Russia’s Ambassador to Syria said of the war:

I use this opportunity to urge Russian businesses to take more active steps. This is the best time to launch operations in Syria.

And indeed, countless Russian companies and oligarchs are already in talks with the Assad government over post-war infrastructure projects. Some even have direct links with Putin.

The art of getting what you want

Oil and gas are a big part of Russia’s desires in Syria, which has reserves off its coast. The country is also at the centre of a battle for control of Middle Eastern oil, and both Russian-backed Iran and Western ally Qatar see Syria as a gateway to the Mediterranean Sea. Essentially, Russia wants Assad in power so it can make money, control Syria’s oil and gas supply, and have greater influence in the Middle East.

And the way of getting all that is to bomb Assad’s opponents and the country’s infrastructure into oblivion – a method copied directly from the West. Klein calls it “shock therapy“:

The falling bombs… serve to soften up whole societies much as the blaring music and blows in the torture cells soften up prisoners. Like the terrorised prisoner who gives up the names of his comrades and renounces his faith, shocked societies often give up things they would otherwise fiercely protect.

This technique, she says, moulds societies in three stages, much like a tortured prisoner. Firstly, it batters them down so they no longer protest and become “blank canvases”. Then, it ‘encourages’ them to relinquish control of their country and its commodities. Finally, anyone who resists will receive more “shocks” (the nature of which may be metaphorical or physical). The West has been using shock therapy for decades, and Iraq [pdf] is one of the most recent examples.

The US: too late to the party

For years, the US seemed fairly uninterested in Syria. It flip-flopped between discussing how to overthrow Assad and calling him a “liberal reformer” just before the 2011 Arab Spring. But eventually, it reverted to its textbook disaster capitalist routine to try and destabilise the country. As I discussed at INSURGEIntel in March, the US:

funneled money and arms into the opposition; used accusations of war crimes and the threat of terrorism to coerce the public into backing a campaign of airstrikes; trained anti-government fighters in coordination with Middle Eastern allies and ran black ops to stoke the sectarian fire —all in the hope of Assad falling. Making way for the American corporatist “diplomats” to move in.

But Russia’s involvement caught the US off guard. Its scaling-up of operations and control of Syria’s air space meant that Washington could only really watch from the sidelines unless it wanted direct conflict with Russia. America’s policy stance was shambolic. It moved from supporting the ‘rebels’ to blaming them for failing peace talks by withdrawing their funding. But its faltering policy stance on Syria by no means shuts the door on corporatists benefiting from the conflict.

On 14 June 2013, the US announced the supply of lethal arms to Syrian rebels. After flat-lining for over a decade, arms company Lockheed Martin’s share price went through the roof. The same thing happened after the Ghouta chemical weapons attack on 21 August 2013. But when you have executives from Lockheed openly saying they’ll see significant “benefit” from the Syrian war, and the company itself donating thousands of dollars to lobby American politicians, the surge of its wealth is of little surprise.

Meanwhile, US, British, French, and Israeli companies are among the mix of energy firms that maintain a keen interest in Syria. And the latest round of political chatter from Western politicians and media outlets is just a continuation of the same theme used in the past. Translated into common English, it means ‘Russia is doing what we would have liked to do in Syria, so we need to stop them’. And the UK has simply maintained its traditional role as a lapdog to the US and Western arms companies.

But both the West and Russia have one thing in common. The same financial corporations fund, and make money from, the continuation of the Syrian conflict.

Disgraceful bankers with fingers in every pie

Britain’s Trident nuclear programme is just one local example of a Military Industrial Complex (MIC) money-maker. The term MIC was coined by US President Eisenhower to describe the blurred lines between arms companies, financiers, and establishment politicians. Now, that line is so blurred it’s invisible.

Multinational companies are directly involved in both the Russian and Western war machines in Syria. Raytheon, which manufactures weapons supplied to the Syrian ‘rebels’ and has had 57 private meetings with the Tories since 2010, is funded by the bank JPMorgan. This organisation, in turn, also provides funding to Russian banks – which pay for the manufacture of weapons supplied to Assad’s government.

Then there’s Fidelity Investments , which has shares in Lockheed Martin and Raytheon, and has also donated £450,000 to the Conservative Party since 2010. Fidelity also has shares in Russian oil and gas companies. And as with JPMorgan, it finances Russian banks which pay for the manufacture of tanks used by the Syrian government.

The level of absurdity

But the rot runs even deeper than this. State Street Corporation, an investment management group which is the fifth most powerful company on the planet, is a majority shareholder in Lockheed Martin. And it simultaneously owns holdings in Russian energy companies and the banks which pay for the Russian weapons sent to Syria.

The shocking part is that State Street also gets a $6m fee [pdf] for being custodians of the Bill and Melinda Gates Foundation’s investment portfolio. This foundation provides money for the relief effort in Syria. The same conflict which State Street directly profits from through its shares in Lockheed Martin and financing of Russian companies.

People dying? How much money can we make?

There is an unspoken truth with Syria that no one dares to utter: that none of the major powers involved have any genuine concern for humanitarian interests. In reality, we are watching a playground scrap between opposing imperialist powers over who will get to rebuild Syria once the bloodshed has ended. And behind Western and Russian posturing are the same immoral companies which know full well that, whatever the outcome, their bank balances will be all the better for it. The 400,000 civilians killed so far only serve to increase their profits.

– Read the author’s full essay on the war in Syria.