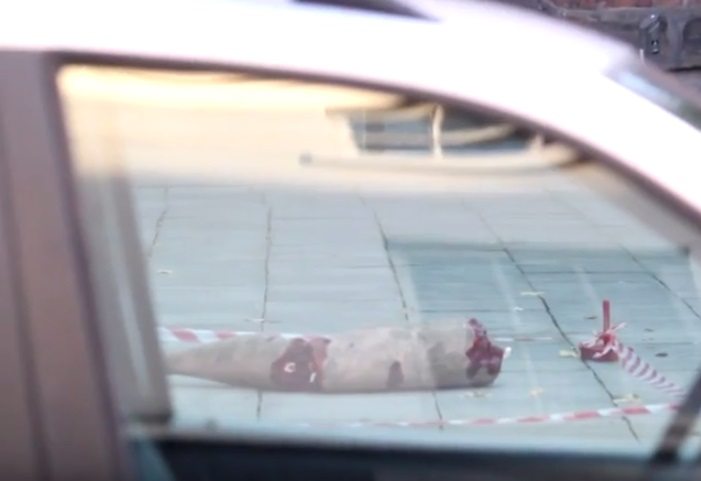 A radical artist is bringing the reality of war to the streets of the UK, in a series of pop-up exhibitions. Carl Fletcher hopes to get people talking about the realities of war. And his graphic art should certainly do that, as it’s a fake limb fashioned to look like one that’s been severed.

Fletcher, from Liverpool, calls himself a visual “interventional artist” who uses the medium to disrupt people’s routines and make them think. His latest piece, called Planet War, came about because of his anti-war stance. And with the ongoing conflicts in Syria and Yemen in the news, its timing is pertinent. Fletcher spoke to The Canary about his work, saying he wanted to shift the debate about war away from social media:

Wars have been fought forever and continue without end. The innocent – the non-combatant – is never made into a memorial or a statue. They are just blown to bits for someone else’s reasons and left lying around – swept into a skip or a mass grave and forgotten. In war, they talk of ‘Missing in Action’. What this means is vapourised, turned into atoms and forgotten again – a way of erasing humans like a big rubber wiping away another living person. I wanted to get people talking about it and debating in real life; not on Facebook or watching impassively on the news as another vanishing human scrolls across the screen.

Fletcher’s idea is a devastatingly simple one. He took an oversized, fake leg and set about turning it into an accurate depiction of one which had been dismembered during war. He then took the art out onto the streets of Liverpool. Cordoning it off to make it look like a crime scene, the piece is shocking and eye-catching in equal measure: 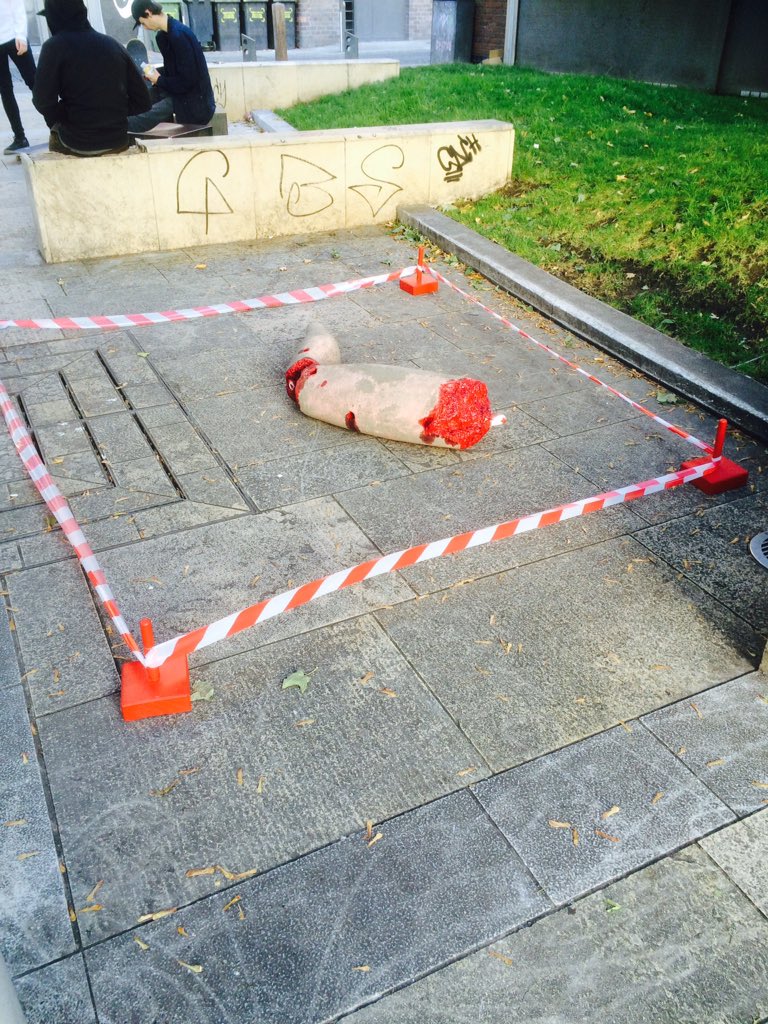 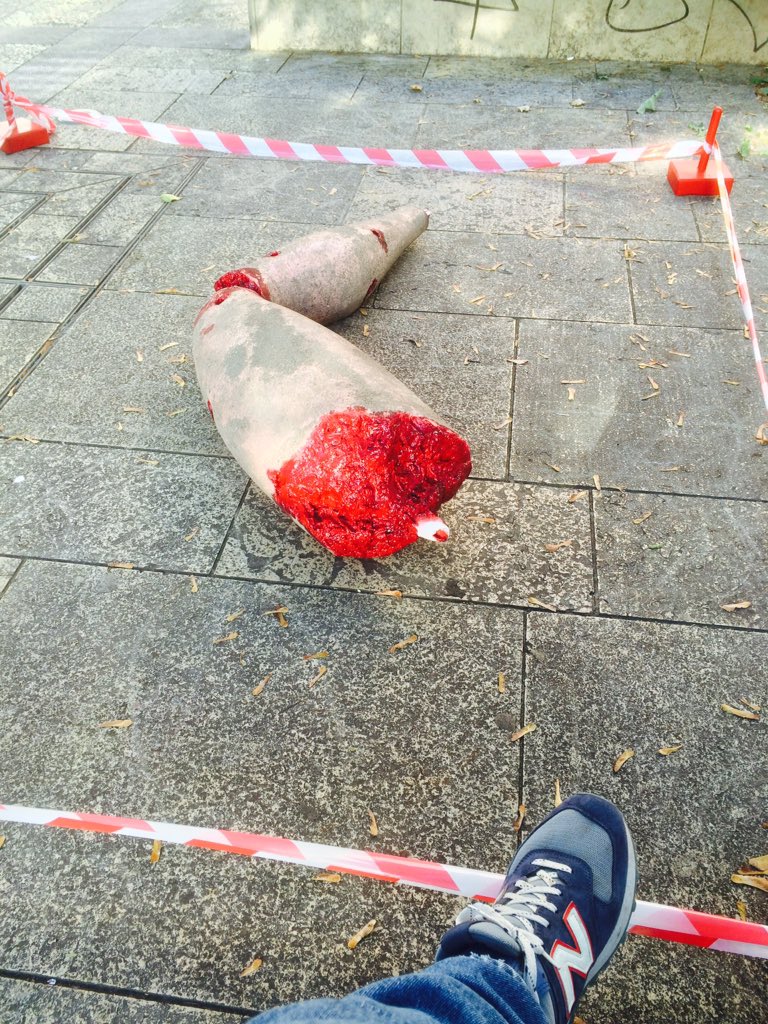 But Fletcher is not a fan of conventional “norms”. He wanted to be an artist from a very early age, but was never allowed to pursue it. “I wanted to go to art college”, he says, “but my dad wouldn’t have it and that was that”. Fletcher says because his father, his uncles and his brothers all worked “normal” jobs, that’s what he would have to do. “The thought of me as an artist was horrific to him”, he says with some resignation. “I did many things and only recently had the opportunity and drive to really express my thought and ideas.”

Speaking to him about the art world more broadly, his opinion on the corporate nature of much of it is unflinching:

We have to smash the relationship between art and oligarchs, who are the modern day Borgias but without their taste or wit. These people only buy art to put it in a vault and watch it appreciate offshore. Any artist who sells to them is complicit in the big con of art prices and should be ashamed. All artists want recognition but we have to show more thought and realise we’re about making the art not the money. Fu*k the money. When you have enough, if you can’t recognise that, then you start becoming a crook or a con artist like the people who buy it.

But he says that we also need to reassess our relationship as a society with art, especially in education. It needs to stop being viewed as a pastime of the wealthy:

We need to make art and the creative at the heart of education. It’s not enough to keep teaching vocational subjects, we need to encourage thought and invention, creativity and rebellion. People can all own art, and can all make art, but we need to value it properly. Not so much that real people cannot afford it but enough so artists can make money, too. And as artists we need to find ways to sell it to them. Hogarth, for example, made great paintings – but made much more money from the prints he made of them. But then he also got ripped  off – with other printers making even cheaper copies so everyone could have the art.

A world at war

Fletcher’s Planet War could not have come at a more appropriate time. The ongoing conflict in Syria has so far claimed the lives of more than 400,000 civilians. And in Yemen, over 10,000 children have died unnecessarily.

Fletcher says the reaction on the street has echoed people’s feelings about the situations:

Nonstop photos, swiveled heads, slowed feet, tons of conversations and questions. Exactly what was wanted – and better. Positive, thoughtful, informed. A few thought it was real, a couple thought it was a Halloween stunt but most, like two Muslim women who had seen war first hand, were supportive and not ‘shocked’. Curious, intrigued and full of opinions. Most thought it was needed and that it was powerful and arresting; the opposite of a Facebook post and debate.

He hopes to now take Planet War across the UK. Fletcher is also in talks with another Liverpudlian artist, Tristan Brady-Jacobs, about making a series of political films. Or as he describes it: “chatting sh*t and arguing and conversing about art, politics and media. And then all the other stuff which we cannot keep inside us for one more second.” But it’s Planet War which is his main focus at present, as he feels it’s such a crucial subject:

We cruise along in our lives, mixed-up in our minds between a blank acceptance of the situation and the horror of it. We see so many images of so many wars, but still go shopping and buy the next big thing, drink the next big drink – blot it all out and pretend it’s not there. But we also feel outrage and anger at events, made worse by the internet. Feeling you have no chance to change things and the growing sense of doom and panic this produces.

Fletcher says art is about a communication of ideas, emotions and concepts. With Planet War, he wants to get people talking in real life and, in doing so, feeling they’re part of a community rather than on their own against the world. He hopes people will “take control in their minds and have the opportunity to engage, however briefly, in something positive and thoughtful.” And while Planet War is shocking and tragic, it serves its purpose – to make the audience stop, think, and question the horrific reality of war.

– View more of the artist’s work.

– Watch the making of Planet War.