The Canary is one year old TODAY, and we have some news! - The Canary 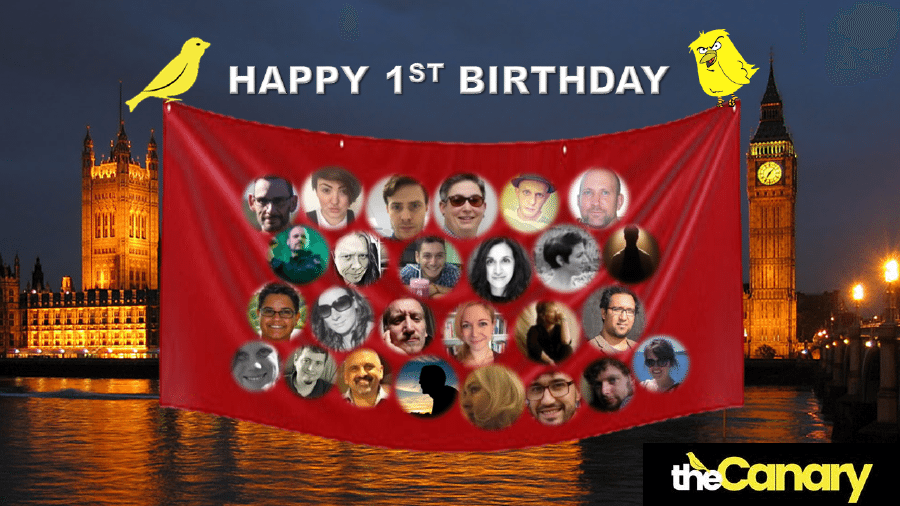 The Canary is celebrating its first birthday today, and as Editor-in-Chief, I’d like to take a moment to speak about the incredible successes we’ve had this year – and tell you all about our plans for the future.

The Canary started as a conversation at a party more than two years ago. I was bemoaning the state of UK media (81% of which is owned by just six corporations) with our founding CEO Roja Buck, and we jokingly suggested we could build something new together. But as the laughter subsided, we wondered: could we?

A year of conversations and planning later, The Canary launched on 14 October 2015. We launched with nothing. No money, no connections, no investors. Just a website that Roja put together, and the faith and talent of the team we had built. But our vision, even then, was to turn The Canary into something exceptional.

We wanted to create a media outlet which:

12 months later, we can say that we have achieved all of these things and more. Growing entirely organically, through word of mouth and social media, The Canary entered the Top 100 news websites in the UK in July – reaching more readers than some established outlets like The New Statesman and The Spectator by only our 10th month in existence.

By the end of our first year, we have reached 13.7 million people, generating 39 million hits.

We don’t care about that because we’re click junkies, but because it is a measure of the size of our conversation. Thanks to our exceptional editorial and business teams, The Canary broke out of the echo chamber. That really upset some people, and they’ve spent a year saying all sorts of crazy and inaccurate things about us.

Often derided as a ‘pay-per-click’ scheme, our business model is nothing of the sort – and it’s been published on our site since day one. We currently have a mainstream media which runs off the back of unpaid interns. To gain a career in the mainstream media, graduate journalists are expected to work for months and even years – for free. Virtually every media outlet in the UK runs unpaid internship schemes. The unpaid labour of those writers is used to fund higher salaries for senior journalists and executives. It’s essentially a ponzi scheme which prejudices against writers from poorer backgrounds. As David Dennis wrote in The Guardian (at the same time the organisation was busily recruiting unpaid interns):

One senior member of a leading national magazine when asked how someone could pay the bills to affording life in New York while working a full-time internship famously told us that if we couldn’t pull an unpaid internship off, then we didn’t want to succeed badly enough. When we asked how he pulled it off, he told us about how he lived in his parents’ spare apartment upstate while working his internship.

For aspiring writers whose parents can’t afford to put them up rent-free in London for years? No journalism for you. This is partly why just one in five mainstream media journalists went to a state school.

These are organisations bringing in millions and billions of pounds each year, and they are expecting their writers (those who actually generate that income) to provide their labour for free. We find that repugnant.

We wanted to create a business that shared earnings between those who are responsible for creating them more fairly; a model that encouraged people from all backgrounds to be part of our newsroom. But we also had the challenge of starting with nothing, literally not a penny. So how did we do it? We built a revenue share model.

First, Canary Media is owned by the leadership team – no one else.

Second, income that comes from our more than 2,000 paying supporters is shared between the writers equally, creating a flat fee for every piece they write. Advertising income, which is generated by the size of the audience each article receives, is split between the writers on that basis.

People have argued that this creates an incentive for writers to reach ever-bigger audiences, as if this is somehow a bad thing. To be clear, that’s the mission for all of us. It’s no badge of honour for only ten people to read a story you’ve spent hours, days, weeks, or even months crafting. We want to reach as many people as possible, with every article. All media enterprises, unless funded at a loss by oligarchs and corporations who want a propaganda arm, make more money the more readers they have. The difference with us is that money goes to the writers, editors and other contributors to Canary Media. Everyone sees what everyone earns every month, and how much we are putting into costs and projects too. There are no external shareholders, no executive directors, no people siphoning money out of the company as an investment vehicle.

The original leadership team – Roja Buck, Andrew Streets and me – all worked for six months for free to get the business up and running and channel as much pay to writers as possible before earnings rose to support us. As Editor-in-Chief (EIC), I’m on the same deal as any other writer, plus 10% of whole site income as my EIC pay.

Most importantly, our writers voted for this pay deal unanimously. They are also all actively encouraged to become members of the National Union of Journalists.

Is it perfect? No. But neither is the world. We can only pay what we are able to earn. So those wanting us to be less reliant on advertising income and increase our writers’ basic pay – become paid members. The more people who are willing to put their money where their mouth is in demanding a new and better media, the sooner we will have one. We give our content to the world for free, as we are against paywall in principle. So those who can afford to pay for the service, we invite you to do so.

We will continue to refine our business model as we grow, always with a focus on fairness and sustainability.

While there has been a widespread line put out by critics that we generated all the readership and income by relentless praise of Jeremy Corbyn, our top 10 articles of the year say something very different. People don’t read us to see nice things said about Jeremy Corbyn, but to get context, background and detail on the issues facing the country, and the world.

Our most successful story was on Theresa May’s Human Rights Act. Next up was a piece about the government’s infrastructure act. In third place was a video viral piece about SNP MP Mhairi Black. In fourth was a piece on Osborne’s sale (at a massive loss to the taxpayer) of RBS shares. In fifth was a piece about a racist Daily Mail cartoon about the refugee crisis. The others were about media bias in coverage of local elections, more Mhairi Black, the NHS, and the link between austerity policies and suicide. Clickbait? Um, no.

By using headlines which most regular people can appreciate and identify with, we are able to have much bigger conversations about subjects which matter, but which normally have a readership consisting only of the already-converted. We have been derided as ‘the number 1 news source of Barry down the pub’, but that’s exactly what we want to be. People in pubs, cafes, factories, offices, fields and homes across the country deserve to be in on these conversations. So we won’t be changing our tone of voice or style of headlines at all. Because we’re not trying to impress other writers. We’re trying to reach the people normally not reached on these issues.

Do we do everything within integrity to have you click through to our articles? Of course we do. Why on earth would we put this much love, skill and care into each article and then not do our damnedest to get them the widest possible audience? But if we were under-delivering, you would expect to see people walking away from us. The exact opposite is happening.

Another widespread misconception is that we are a media outlet predominantly for young people. In reality, of our 13.7 million readers this year, just over 1 million were aged 18-24. We are read mostly by 25-to-54-year-olds.

It’s the same pattern with those who engage with us through our primary social media account on Facebook.

So we need to get better at attracting a younger readership!

The launch of Canary Media 2.0

The website was always intended to be just the first step of a long journey for The Canary. There is a lot more to come.

Over the next 12 months, there are going to be major changes. There will be a total redesign of the website. We will be moving into TV and video. And we’ll be launching a major membership scheme which will bring democracy into journalism in a way not seen anywhere else.

We will also be holding a live event bringing our members and the team together in one place. So look out for announcements as they drop in coming months.

Firstly, I’d like to acknowledge my original business partner Roja Buck. He got us kicked off, and Canary Media wouldn’t have happened without him. He never took a penny in pay for the work he did during six months of start-up. And on leaving, he donated his shares back to the company for me to have a free hand in creating a new leadership structure. This was a great act of generosity.

Secondly, the writing and editorial team who work their socks off every day – but with such a sense of fun and friendship. I am often asked: ‘what are you most proud of about The Canary?’ My answer is always: the newsroom. We have created a virtual newsroom, in which our writers are a very real team. We care about each other, we respect each other, and we stand for each other being the very best. It’s a pleasure to work with each and every one of these incredible people, and I’m proud of that.

Thirdly, thank you to the business team who have created a stable and sustainable business, providing writers with an income that didn’t exist a year ago. They are the unsung heroes of The Canary.

And last but not least, you. Yes you, reading this now. Thank you for reading us, for paying to support us, for sharing our articles, and for all of your comments and emails. That’s why we’re here: to bring you the news. Thank you for trusting us to do that with integrity. We will do our best to earn your continued support every single day.