The Sun launches a vile attack on one of Britain’s best journalists, and our entire media cheers them on [VIDEO] - Canary Workers’ Co-op 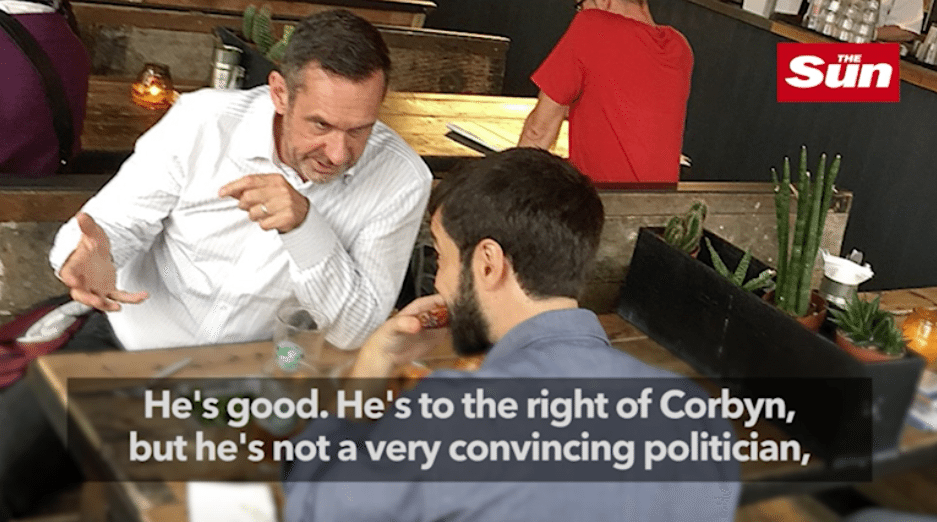 Imagine you were having a private chat in a cafe, over a pint and a pie, and you woke up to find someone had secretly recorded you, and then published it in The Sun. That’s what happened to journalist and author Paul Mason this week, and instead of being outraged by a needless intrusion into his privacy, many of his fellow journalists are cheerleading the whole sorry affair.

While Mason was at the Labour Party conference in Liverpool, he sat down at a cafe and had a conversation about the future of the party. Without his knowledge or permission, someone nearby took photos and recorded his conversation – all of which have now been published by The Sun. The recording (which we won’t republish here) features him saying:

I think the person who I would replace Corbyn with eventually is this guy called Clive Lewis. He’s good. He’s to the right of Corbyn, but he’s not a very convincing politician. He’s not 30 years of ultra left [UNCLEAR], but he’s good, he’s good enough for me.

At that point, so he, he has shared many platforms with the Greens [UNCLEAR].

Corbyn, he doesn’t appeal to the working class vote. It’s to do with a cultural thing about London. Mainstream working class voters like big. To be honest, if Clive stood that’s what they want [UNCLEAR]. Someone with a big ego who would shout and [UNCLEAR].

This simple, uncontroversial chat over lunch was reported in The Sun like this: 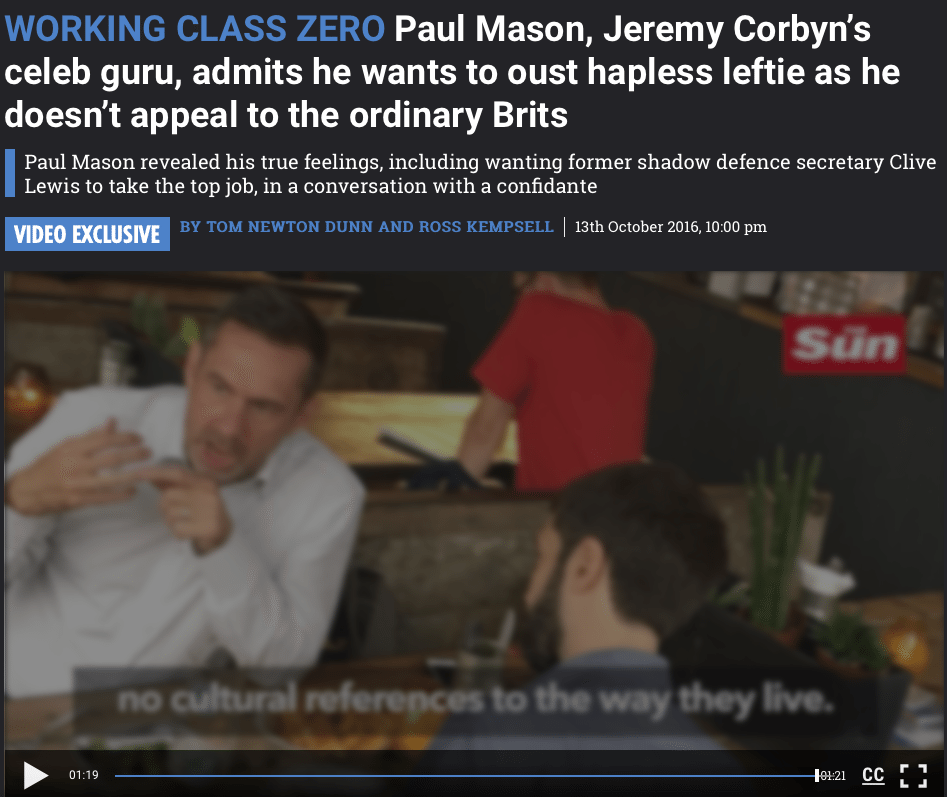 What’s the matter with that?

There is a lot the matter with this ‘sting’.

Stealth surveillance should be reserved for exceptional circumstances. If Mason was an anti-drugs tsar doing a drug deal in the cafe? Yes. If he was a sporting manager discussing a bribe to fix a match? Maybe. If he was a politician taking money to perform political favours? Absolutely. In these cases, the public interest outweighs the privacy issue. But Mason was doing none of these things. He was breaking no law or ethical standards, and he was saying nothing he hasn’t said in public before.

The Canary spoke with Paul Mason, and he had this to say:

The Sun violated my privacy and that of the person I was talking to. Journalists should only do that if there is significant public interest, and I can’t see any public interest since I’ve always said the Labour leadership struggle was not about Corbyn himself, and made my differences with him clear.

This is easily verifiable. You can see Mason make these exact comments in an interview with Novara Media earlier this year:

The appalling reaction of the media and political class

A journalist’s privacy has been infringed upon grossly, purely because of his political views. The media and political class should be united in horror at this attack. Instead, they are actually cheering The Sun on.

Daniel Knowles, of The Economist:

To which Alan White, News Editor for Buzzfeed, replies:

it would be funny if he hadn't spent the last 12 months stoking up anger at MPs who actually care about their constituents..

Politics Home wrote an entire piece on the issue without once raising the issue of privacy or questioning the substance of the story. Instead, they adopted the same ‘gotcha’ style tone of voice as The Sun.

And it wasn’t just Mason’s peers who were celebrating, but the anti-Corbyn Labour MPs and councillors who tried and failed to oust Corbyn over the summer.

I give as much of a toss what Paul Mason said today as I did yesterday or the day before….

The Labour leader of Corby council:

This comes just weeks after Channel 4’s Dispatches aired footage taken by a mole planted in Momentum. To create its content, Channel 4 sent a journalist undercover for six months, during which she volunteered with Momentum and later worked with ‘Jeremy for Labour’. Her mission was to ingratiate herself with activists and campaigners in order to secretly record film and audio footage of their conversations. Some of these activists were barely in their teens.

What happened to those young activists, and what has happened to Paul Mason, is unacceptable. It is not a crime (yet), to hold left-wing political views – and people need to feel safe that when they go to a political meeting, or they sit down for a chat at a cafe, they can speak freely. The intention of these ‘sting operations’ is not just to cause short-term embarrassment, but to create a climate of fear, paranoia and suspicion among activists and journalists who hold a political view that the establishment finds threatening.

In efforts to crush a resurgent left, the establishment media and political class have this year colluded in stealth surveillance, smear campaigns, voter purges, and a coup – and they have the nerve to call others ‘Stalinist’. Be in no doubt, the establishment is fighting for its existence, and its intention is to crush the fresh and powerful opposition it faces from the twin revolutions in new media and new politics. As Mason concluded in his words to The Canary:

It’s another sign that by removing Labour from the influence of scab employer Rupert Murdoch – and electing the best leader Labour has had in my lifetime – we’ve got them rattled.

So to all those facing down the wrath of a truly rattled media and political class, the challenge is to remember who you are, retain your passion, intensity and solidarity – and keep building. Don’t let the bastards get you down.