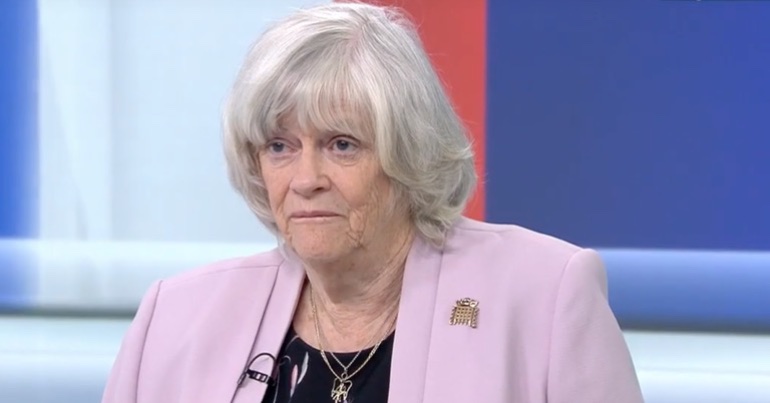 But a brief look at her history shows that gay rights aren’t the only reason to be troubled by her.

During an interview on Sky News, Widdecombe was asked about historic comments concerning so-called gay conversion therapy. Conversion therapy is described by the LGBTQI+ rights group, Stonewall, as:

Conversion therapy (or ‘cure’ therapy or reparative therapy) refers to any form of treatment or psychotherapy which aims to change a person’s sexual orientation or to suppress a person’s gender identity. It is based on an assumption that being lesbian, gay, bi or trans is a mental illness that can be ‘cured’. These therapies are both unethical and harmful.

Widdecombe responded in the interview by arguing that:

The fact that we now think it is quite impossible for people to switch sexuality doesn’t mean that science may not yet produce an answer at some stage.

.@brexitparty_uk MEP, Ann Widdecombe, controversially tells #Ridge that science might one day "produce an answer” to people being gay.

But will science ever find an answer to Anne Widdecombe? https://t.co/p19Lsx1bJd

Boh. Anne Widdecombe openly saying on #Ridge that science ‘may yet’ come up with a solution to homosexuality. Do us a favour Anne, fuck right off.

Raises questions about the Brexit Party

Regardless of your position on Brexit, it's crystal clear this party is not fit for 21st-century politics.

With Ann Widdicombe claiming that science could "cure" gay people, it's time to say again:

Stop supporting this shower of bastards.https://t.co/bG3aeVz83e

However, disabilities campaigner, Sue Marsh, had words of caution for those who think exposing such views will sink the Brexit Party:

I bet Anne Widdecombe hasn't lost a single Brexit Party vote with this.
We need to understand fast that what we find shocking, what we think will finish these guys off, plays very well with their base.

The tip of a large anti-gay iceberg

But Widdecombe’s history of troubling views extends well beyond the latest incident. Widdecombe regularly voted against the expansion of gay rights. And prior to the legalisation of gay marriage by David Cameron, Widdecombe told the Guardian that:

the state must have a preferred model, and the model that has served us throughout the millennia is marriage – a man and a woman in a union that is generally open to procreation. Marriage isn’t about two people; it is the basis for the family.

In 2017, Widdecombe was asked about Liberal Democrat Tim Farron’s views on whether gay sex was a sin. Widdecombe effectively trivialised the issue, responding:

All I can say to that is… there’s a war in Syria, starvation in East Africa, a Brexit negotiation, an economy to get really going, an education system to pick up off the floor and an NHS to sort out and if you’re really worried about homosexuality in the middle of all of that, then I would say, there’s a lack of proportion there somewhere.

Widdecombe also seems to have a difficult relationship with members of her own sex and feminism.

During an interview on This Morning, she dismissed much of the #MeToo movement as “trivial whinging”. She claimed that the gender pay gap is a “very largely a myth”. She also denounced all women shortlists and quotas aimed at redressing gender imbalances. And she argued that men, not women, are at a disadvantage in the courts. She also defended wolf whistling.

Meanwhile, during the MPs sexual misconduct scandal, she claimed women were “being so wimpish these days wallowing in self-pity” and claimed women didn’t used to be “helpless little snowflakes”.

She also famously quit the church of England and became Catholic, claiming that:

the last straw for me was when the Church of England decided to ordain women priests.

And on it goes…

Widdecombe also described some of the so-called ‘Waspi women’ as “whingers and whiners”. These women were deprived of their pensions after the Coalition government accelerated the planned rise of the pension age to 65 with the 2011 Pensions Act.

And during her time as Conservative prisons minister in 1996, Widdecombe defended the practice of shackling pregnant prisoners when in hospital. She’s also previously expressed her opposition to abortion.

The above is just a taste of her record. She voted against measures to stop climate change as an MP. In 2014 she wrote supporting climate emergency denial and in 2009 was reported to have said:

There is no climate change, hasn’t anybody looked out of their window recently?

A Green Party candidate in the recent EU elections shared his experience with her on the issue:

I did a hustings with Anne Widdecombe. She tried to maintain that climate change is driven by "sun and clouds". She really doesn't understand what science is at all. #AnneWiddecombehttps://t.co/NlLzpn8Hc7

Elsewhere, she’s expressed support for private healthcare. And as recently as 2016 wrote in support of the death penalty, contradicting the pope.

Although Widdecombe did famously support the banning of fox hunting during a parliamentary speech in 1997, so that’s one tick at least.

Widdecombe really is the full package. The Brexit Party may hope that the public solely focuses on its Brexit approach. But the public has a right to know the politics of their candidates. And if Widdecombe is anything to go by, they’re truly terrifying.