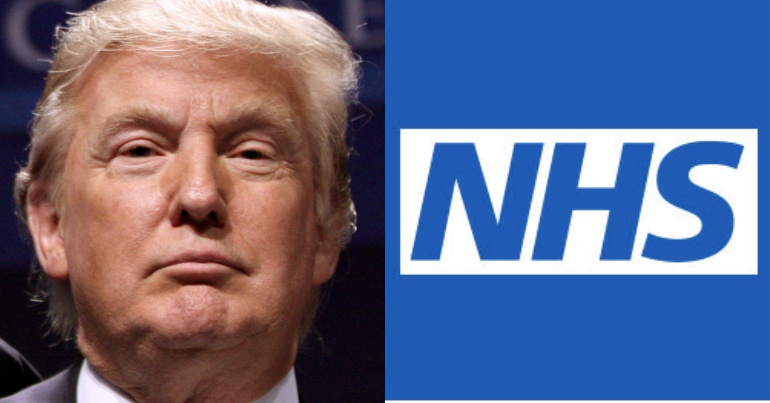 The day before Donald Trump landed for a state visit in the UK, the US ambassador spoke on the Andrew Marr Show. He gave the most terrifying indication yet of what future trade deals between the US and UK may have in store after Brexit.

On 2 June, Andrew Marr spoke to US ambassador Woody Johnson. He said:

A lot of people are worried that a big free-trade deal with America means American pharmaceutical and medical corporations getting a slice of the NHS.

Initially, Johnson talked around the issue, praising the NHS as “the pride of the country”. But Marr pushed further and asked if “healthcare has to be part of the deal”. Johnson replied that “the entire economy… would be on the table”. And when Marr then asked “which includes health care?”, Johnson said:

I would think so.

US Ambassador to the UK Woody Johnson tells #Marr that the whole of the economy, including the #NHS, will be “on the table” in a future US-UK trade deal after Brexit https://t.co/OakG0Gu6Ro pic.twitter.com/BlYJ9GKcuJ

This prompted shadow health secretary Jon Ashworth to note that a no-deal Brexit could have ‘terrifying consequences’:

Here’s the terrifying consequence of a no deal Brexit followed by a trade deal with Trump’s US – our NHS up for sale.

It's obvious why Donald Trump wants a No Deal Brexit. He sees the opportunity to bring a weak and desperate UK to the negotiating table. Our NHS is on the line. #marr https://t.co/OBL5nBXg61

Here it is, laid bare.

The NHS will be “on the table” in Trump’s trade deals.

“Keep your mitts off my NHS”

The US ambassador’s interview on Marr followed interviews with Trump in Rupert Murdoch-owned UK outlets. According to the Times, Trump “loves Nigel Farage and Boris Johnson”:

In an interview with The Sunday Times ahead of his state visit, Donald Trump speaks candidly about the Labour leader, how Britain should get the best Brexit deal and why he loves Nigel Farage and Boris Johnson https://t.co/mZ3Ywvqhsp

As the Times reported, Trump thinks the UK should send Farage “to negotiate with Brussels and pursue a no-deal Brexit if the EU refuses to give Britain what it wants”. Trump said:

This came shortly after he backed Boris Johnson as an “excellent” potential PM in the Sun:

Apparently undeterred by last year's experience doing an interview with The Sun before visiting the UK, President Trump has done it again. He says Boris Johnson would make an "excellent" prime minister and that he didn't know Meghan Markle was "nasty." https://t.co/JNByva5KxL

Both Farage and Johnson have openly backed a no-deal Brexit.

In 2014, Farage insisted that the UK will “have to move to an insurance-based” healthcare system instead of the NHS. Ahead of the EU elections in May, he then argued that insurers could “take the burden off the NHS”. And Labour’s Richard Burgon says that it’s increasingly clear why Trump is endorsing Johnson:

Trump wants US private health giants to get their hands on our NHS.

Trump wants to flood our supermarkets with chlorinated chicken

That's why Trump backs Boris. And why Boris wants No Deal.

And that's why Labour will do whatever it takes to stop a disastrous No Deal Brexit. https://t.co/JVddEljr6d

This is a point that other people on social media also noted:

And there we have it – why Trump wants Boris Johnson (or very likely any advocates of a no deal Brexit) to win the Tory leadership. They want our NHS. https://t.co/F4KqbBhs0H

Campaigner and activist Rachel Swindon responded to the situation too, quoting the late Harry Leslie Smith’s famous words about the NHS:

As Donald Trump washes up on our shores, intent on slicing open our greatest socialist achievement, my message to him is inspired by the much-missed legend that is @Harryslaststand

“Keep your mitts off my NHS”

Trump’s backing of Johnson ahead of the Conservative leadership contest is seen as breaking diplomatic protocol. And, given this is a state visit, the US president calling Meghan Markle “nasty” also risks ruffling establishment feathers further.

Trump’s UK visit is already highly controversial and huge protests are expected. But the fact his US ambassador suggested the NHS would be “on the table” in a US/UK trade deal makes matters even worse. Since taking office, Trump’s been called out for continued racist, sexist, warmongering, and climate-wrecking policies, comments and actions. He’s a dangerous figure who really shouldn’t come anywhere near political negotiation on matters of life and death in the UK.