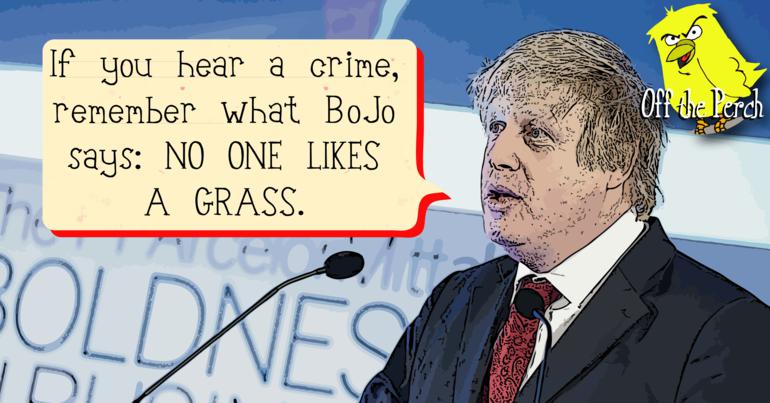 Boris Johnson is campaigning to be the next prime minister of Great Britain. At least he’s sort of doing that, anyway. To be honest, he’s more just mumbling his way through sporadic interviews – confident that his poll lead will carry him through.

However, following a reported altercation at his girlfriend’s flat, Johnson is now being forced to unveil an actual policy idea. It’s a slogan that encapsulates his approach to potentially criminal behaviour. That slogan is:

“NO ONE LIKES A GRASS”

Johnson is working from ideas given to him by his fellow politicians and commentators:

Mumbling his way through a half-arsed announcement, Johnson said:

Crime in this country has reached tragic proportions, and you know why that is? It’s because nosey neighbours keep reporting it. Whatever happened to that reserved British spirit? Whatever happened to minding your own fucking business? If people stop interfering, we could reduce crime by 100%.

When asked if he was pursuing this approach to help people like himself get away with murder, Johnson called security. Apparently he felt that tough questions – which is to say any questions – were a personal attack.

When asked if this meant Johnson favoured a ‘one rule for them and another for me’ approach, the would-be PM called for a sniper squad.