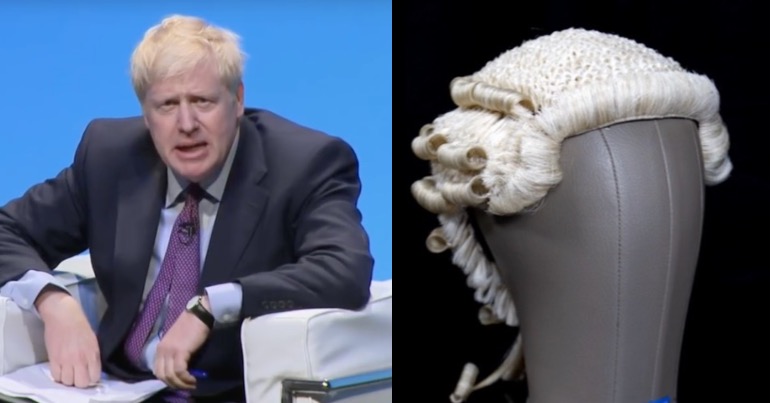 There’s been no shortage of defence for Conservative leadership hopeful Boris Johnson after a disturbing transcript was published. It reportedly revealed an incidence of domestic violence towards his girlfriend.

Instead of scrutinising the conduct of our would-be prime minister, some right-wing journalists are targeting Johnson’s neighbours for reporting the incident at all. The Telegraph columnist Allison Pearson has even questioned the legality of them recording the heated row.

However, the author of The Secret Barrister: Stories of the Law and How It’s Broken, has rubbished these claims. And by doing so, they’ve also highlighted what appears to be legal ignorance among some journalists.

Pearson of the Telegraph (the same paper that Johnson also writes a column for) came out to bat for Johnson.

In a series of tweets on 22 June, Pearson attacked Johnson’s concerned neighbours:

The Stazi mindset of many people on here is frightening.
It’s perfectly OK to record private conversations and give them to the media. Really?
How about show trials for people not agreeing with the correct things. Where do we stand on those?

She also posted a question speculating that the recording of Johnson was potentially illegal:

Can a lawyer help please? Is it illegal to record a private conversation then pass it onto a third party with a view to damaging reputation?

One person happy to help answer Pearson’s query was the anonymous Secret Barrister. They’ve previously written a best selling expose of life as a barrister in a legal system cut to the bone.

They provided Pearson with a clear answer to her legal question:

Matthew Scott of Barrister Blog, also added the detail that the intent of Johnson’s neighbours in recording the incident was legally irrelevant:

Intent doesn't come into it. If the noise of your row can be heard in the neighbours' flat, they can do pretty much what they like with it, short of blackmail. It may not be very neighbourly but it isn't criminal to flog the recording to the Guardian.

If giving the recording to the Guardian was politically motivated then that’s a crime. It’s harassment. Fair enough to report a loud argument. Appalling to go to the papers with it. https://t.co/dUAIXJgvXD

Pearson was then well and truly lawyered by the Secret Barrister:

No. Harassment requires proof of a “course of conduct”, defined in s7(3) Protection From Harassment Act 1997 as “conduct on at least two occasions”.

A single recording, whether politically motivated or not, does not establish a course of conduct.#Lawyered https://t.co/aoezqiOcEE

Things then got worse for Pearson.

According to the Secret Barrister, Pearson, in fact, might be the one on dodgy legal ground:

Fun fact: What *might* constitute a criminal offence of harassment, however, is an online campaign by a prominent newspaper columnist aiming to expose and incite hostility towards a private couple who called the police to report a potential incident of domestic violence.

Like this, for instance. This is what I as a prosecutor might consider pretty decent evidence of inciting an offence of harassment. pic.twitter.com/ifzadI4EEh

Pearson then went into the hypothetical realm and was accused of being wrong… AGAIN:

No it wouldn’t. It really, really wouldn’t. https://t.co/u4SAzccXk9

Far from being criminals, they highlighted the important role concerned neighbours can play in such cases:

I’ve lost count of the number of domestic violence cases I’ve successfully prosecuted which only came to the police attention because of the actions of concerned neighbours. These people are literal life-savers. For MPs to discourage this for political point scoring is shameful. pic.twitter.com/SnZh9gvADu

But it wasn’t just the Secret Barrister who gave their legal input.

Elsewhere, law trainer and journalist David Banks highlighted the absurdity of an article discussing the story written by Spiked. The article suggested the Guardian were hypocrites for condemning phone hacking while happily publishing the transcript of a recording obtained from a private recording of Johnson.

But Banks made short shrift of this argument:

If you can’t see the difference between hacking a phone and recording an argument so loud it can be heard in your own home, you really have no business being in journalism… https://t.co/sacoMBdo3s

He then took apart the suggestion that Johnson was legally entitled to privacy in this instance:

Question 1. If you are having an argument so loud and violent it can be heard in neighbouring properties and the street, and the police are called, do you have a ‘reasonable expectation of privacy’. I’m not polling this, the answer is no.

Question 2. If you are a person who might possibly become Prome Minister in the near future, is your behaviour in such a situation a matter of public interest. Again, no poll, I’m not going to allow people to be wilfully wrong, the answer is yes. Now can we move on?

The state of journalism in 2019

Reflecting on the issue, the Secret Barrister had this withering assessment of the state of journalism today:

“If a private citizen is told by an organ of the state that X involving a public figure does not require further investigation, it is not for journalists to question or investigate X further. Nor should citizens approach journalists with concerns.”

And they highlighted this absurdity:

But the stampede of outrage among journalists at the notion that private citizens would alert journalists to something that they believe (rightly or wrongly) to be of public interest is one of the oddest sights in recent times.

QUALIFICATION: The oddest sight in recent times is in fact journalists calling for the law to criminalise sources passing information to journalists. See yesterday’s fun and games.

This story highlights the desperate lengths some establishment journalists will go to, in order to defend their personal champion, Boris Johnson.