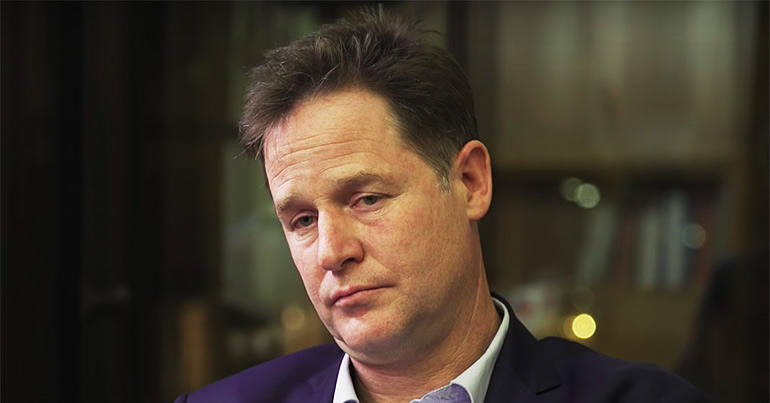 The data analysis firm Cambridge Analytica (CA) has been accused of influencing the 2016 US election (although some claim its impacts have been exaggerated). There have also been investigations into CA’s role in using Facebook to influence the 2016 Brexit referendum. This has now led to an interesting situation in which Nick Clegg is defending Facebook against his fellow Remainers.

Yes, Facebook has a heavy responsibility to protect the integrity of elections from outside interference. I also think we have a duty to explain fact from some of the allegations that have been made.

You are saying that for all those people who may share your view, and think that Cambridge Analytica was one reason this referendum was lost by the Remain side; you’re saying, myth. Not true. Conspiracy theory.

I’m someone who was debating with Nigel Farage before Facebook was invented. And much though I understand why people want to… reduce that… eruption in British politics to some kind of plot or conspiracy, or some use of new social media through opaque means, I’m afraid the roots to British Euroscepticism go very, very deep. And candidly, over the last 40 years, have been much more influenced by traditional media than they have by the new media.

It’s all kicking off

Clegg has received a lot of online criticism for the interview:

Nick Clegg is earning his money, taking commercial spin to a new level.

The point about “fake news” is that it gives mainstream credence to complete fiction, thereby altering the balance of public debate.

Sadly though, it is here to stay. Public beware. https://t.co/NJLVg9fSto

I do wonder whether, if there's much more of this sort of stuff, some @LibDems will eventually come to see Nick Clegg as some @UKLabour supporters have come to see Tony Blair. https://t.co/Ja0va9Zhb6

Listening to @BBCr4today , a thought strikes: From tuition fees to Facebook, Nick Clegg has always been less a politician and more a salaried apologist.

Clegg has also received some support – notably from Leave.EU:

Although Leave.EU was accused of working with Cambridge Analytica to influence Brexit, a November 2018 report from the Information Commissioner’s Office found:

both parties stated that only preliminary discussions took place, and the relationship did not move forward when Leave.EU failed to attain the designation as the official Leave campaign4 …

Based on our enquiries, testimony and interviews, we conclude that this is indeed the case – there is no evidence of a working relationship between CA and Leave.EU proceeding beyond this initial phase.

However, AggregateIQ – a firm linked to Cambridge Analytica – did provide services to the official campaign Vote Leave. These services included targeted ads on Facebook.

While Facebook has a serious trust issue, so too does Clegg. This is especially true on Brexit. Although the overall effects of groups like CA remain unclear, research has shown that austerity served as the “main driver behind leave vote”. As one of the architects of austerity, Clegg should really be answering for his own actions rather than the people who are now paying him.