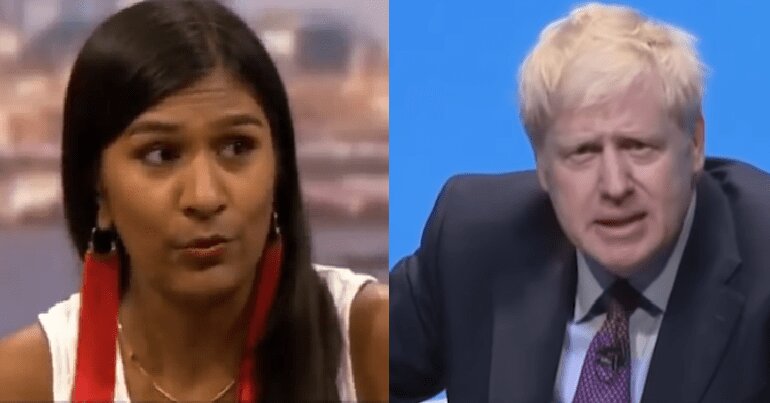 Speaking on the Andrew Marr Show on 23 June, Sarkar called out the pundits who have been downplaying a woman shouting “get off me” late at night. That’s what Johnson’s neighbours reportedly heard when they called the police in the early hours of 21 June.

On the BBC, Sarkar branded the narrative “incredibly irresponsible”. On 23 June, more of Johnson’s neighbours came forward, with one saying:

It was a proper tear-up. Glasses being smashed, screaming and a lot of arguing. I thought someone was being murdered.

According to the Office for National Statistics (ONS) “two women are killed each week by a current or former partner” as a result of domestic violence. And the ONS has also reported:

Johnson, meanwhile, is somebody who once conspired to have a journalist’s ribs broken.

.@AyoCaesar absolutely spot on speaking on #Marr about the coverage of the neighbours that recorded the Boris Johnson incident 👏🏻👏🏿 pic.twitter.com/vuBhYKzXaK

“The reason I feel so strongly about this”

I think that this coverage of the political views of the neighbours is actually weirdly Mcarthyite. This idea that because they voted Labour, because they were  pro-EU, because she gave the finger to Boris Johnson in the street, the way like 50% of Londerners I think would, that they shouldn’t be trusted and that their motivations for recording the row, the screaming, the smashing were malign.

And she then spoke of the consequences:

The reason I feel so strongly about this is that I think this has negative consequences beyond the Westminster pony show… Having a row in which you shout and you say things you don’t mean, that’s a normal part of relationships. Screaming ‘get off me’ at midnight, hearing thuds, hearing smashing… physical intimation is not a normal part of relationships… To see MPs and right-wing pundits just fall over themselves to normalise it, I think is incredibly irresponsible.

On social media, one barrister hammered the point home:

I’ve lost count of the number of domestic violence cases I’ve successfully prosecuted which only came to the police attention because of the actions of concerned neighbours. These people are literal life-savers. For MPs to discourage this for political point scoring is shameful. pic.twitter.com/SnZh9gvADu

Suggesting people shouldn’t phone the police when they think they’ve heard domestic violence is dangerous. And male violence against women is an ongoing problem that we need to do more to tackle, not less. What’s concerning is Sarkar was a rare voice of sanity in the corporate media, while right-wingers rushed to protect Johnson – a frequent liar and cheat who apparently has no problem with violence. Utterly shameful.