'Johnson afraid to face me', says man afraid of a general election - The Canary 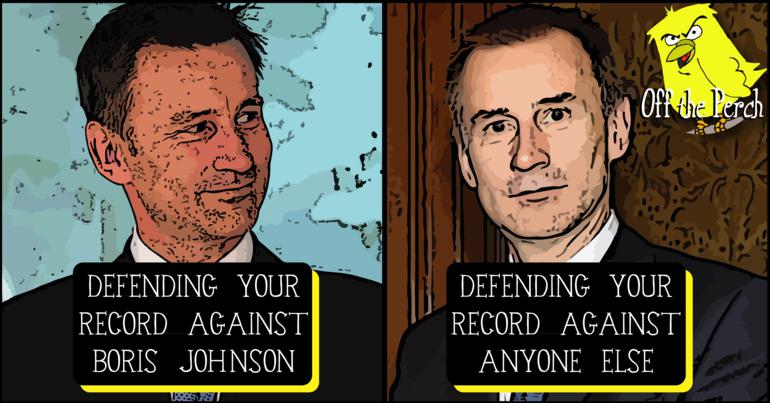 Boris Johnson – the winner of the 2019 Tory leadership race – isn’t putting much effort into the contest he’s already won. And why would he? He’s already won.

The man who thinks he’s in competition with Johnson has labelled this cowardice. The same man, however, is running away from the idea of a general election. Like literally. We just asked him about it, and he ran off.

As soon as we asked the question, Hunt pushed the microphone into our face and ran off. Putting that gangly agility to good use, Hunt scurried up and over a 15ft wall like a house spider. We gave chase, but it really was no use. Thankfully, we weren’t the only ones.

When Hunt got home – covered in dirt and scratches – he found another gaggle of journalists. They began asking him if he had the confidence to fight a general election, but before they could get the words out, he screamed:

He then turned his garden hose on them. This only stopped them for so long, however, and eventually the journalists got the question out. As they repeatedly asked it, Hunt dropped to the floor clutching his tummy.

It’s clear why Hunt won’t call an election. As the man said himself:

This is also why we definitely should have a general election. That and the fact we haven’t had one in weeks.